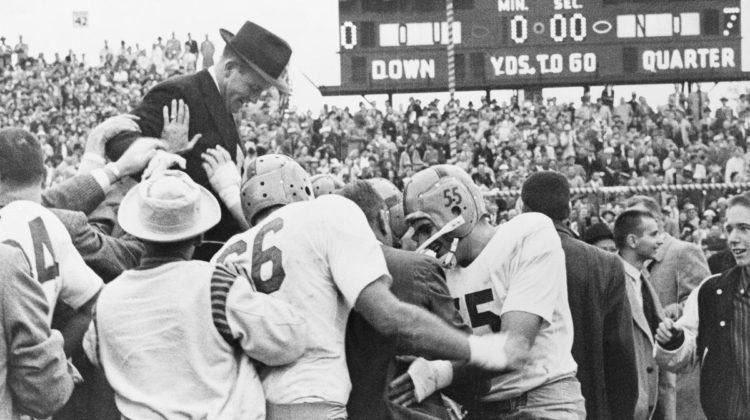 There’s something about long winning streaks that brings out the best in Notre Dame athletics. Just two years ago, it was the Fighting Irish, playing in their lone season as a member of the ACC, that snapped Clemson’s 29-game conference winning streak.

Throughout its history, however, that is hardly the most significant streak that Notre Dame has snapped. On the hardwood, it was famously Notre Dame that snapped John Wooden and UCLA’s NCAA-record 88-game winning streak in 1974. Coincidentally, that streak began following a loss to Notre Dame.

The same was true on the gridiron. Losses to Notre Dame bookended Oklahoma’s 47-game winning streak, which began in 1953. It ended on this day 65 years ago in a 7-0 win for Notre Dame in Norman.

Led by legendary head coach Bud Wilkinson, Oklahoma was 7-0 and ranked No. 2 in the country as it arrived at Oklahoma Memorial Stadium on Nov. 16, 1957. The Sooners had survived a scare earlier in the season against Colorado, but was coming off a 39-14 thrashing of a ranked Missouri team in Columbia. On a 47-game winning streak, Oklahoma’s last loss had come to Notre Dame in a top-10 matchup in Norman early in the 1953 season.

After a 4-0 start, Notre Dame was unranked and coming off consecutive losses to Navy and Michigan State by a combined 54-12 margin. The Fighting Irish arrived as 19-point underdogs.

Both teams had scoring opportunities in the first half, but getting on the scoreboard was easier said than done. After a scoreless third quarter, the Fighting Irish mounted a drive for the ages.

In a 0-0 game, Notre Dame began the decisive drive at its own 20-yard-line with more than 13 minutes remaining. A jump pass from Notre Dame’s Bob Williams to Dick Royer put the Fighting Irish in the red zone. They would ultimately have a 1st-and-goal from the Oklahoma 8, but after the next three plays netted just five yards, head coach Terry Brennan had a decision to make.

Rather than attempt a field goal from a steep angle, Notre Dame kept the offense on the field. On 4th-and-goal and the 20th play of the drive, Dick Lynch took the pitch and scored from three yards out to give the Fighting Irish a 7-0 lead with 3:50 remaining in the contest.

After a punt by Oklahoma and a turnover on downs by Notre Dame, the Sooners mounted one last drive inside the Notre Dame 25-yard-line. With less than a minute to go, Oklahoma’s Dale Sherrod fired into the end zone, but Williams was there to intercept the pass and secure the victory.

The momentum from the monumental victory didn’t last long for Notre Dame. The Fighting Irish were defeated by No. 8 Iowa the following week, but closed the season with blowout wins over USC and SMU to finish 7-3 and in the top 10.

Oklahoma bounced back with three straight wins to conclude the regular season, including a 48-21 drubbing of Duke in the Orange Bowl. The new winning streak, however, would reach only five.

Since the victory by Notre Dame ended Oklahoma’s 47-game winning streak, no team has won more than 34 straight contests and none likely ever will. It took just a single score to end the longest winning streak in college football history. It came on this day 65 years ago.