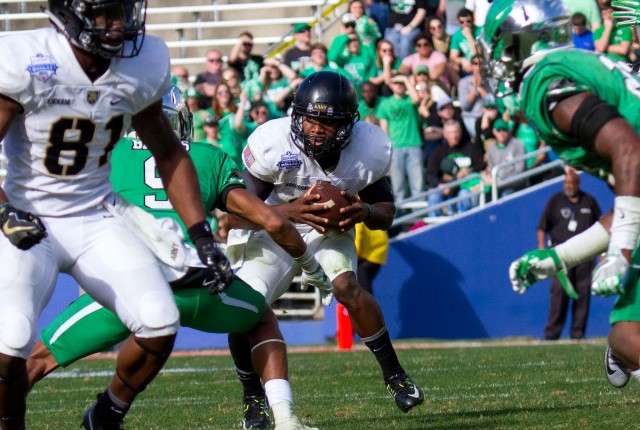 With last week’s Armed Forces Bowl contest against Missouri, Army has now made bowl games in five of the last six seasons. There was a time however, when bowl appearances weren’t all that common for the Black Knights. Bowl wins were even more remote.

On this day five years ago, Army finally got off the schneid. It took overtime, but Army outlasted North Texas in the Heart of Dallas Bowl for its first bowl win in 31 years, 38-31.

Army was 7-5 as it arrived at the Cotton Bowl on Dec. 27, 2016. The Black Knights were playing in a bowl for the first time in six years, but had not won one since 1985. During that stretch, Army had appeared in just three prior bowls and lost them all.

North Texas wouldn’t have normally qualified for a bowl, but without enough bowl-eligible teams, the Mean Green arrived in Dallas with a 5-7 record. After falling behind by 17 points early, North Texas mounted a furious comeback.

After 59 points through the first three quarters, the teams went scoreless for more than 14 and a half minutes in the final period. Army led 31-28 after three quarters and twice made trips into North Texas territory in the fourth, but were turned away on downs each time.

Back-to-back penalties however, would derail the Mean Green. Facing 2nd-and-23 from the Army 41-yard-line, Morris completed consecutive passes to Tyler and Jeffrey Wilson covering 21 yards. On 4th-and-2 however, North Texas elected to settle for a field goal. Trevor Moore’s 37-yard attempt split the uprights with 28 seconds left and the contest went to overtime.

North Texas was one play away from forcing a field goal in overtime, but Ahmad Bradshaw’s 15-yard strike to Edgar Poe on 3rd-and-8 set the Black Knights up with 1st-and-goal. Three players later however, the Mean Green came up with a third-down stop.

Head coach Jeff Monken left his offense on the field.

On 4th-and-goal, Jordan Asberry took the toss from Bradshaw to the right side. Asberry was able to cut back and into the end zone for the go-ahead 3-yard touchdown.

The North Texas possession started with two runs that totaled just one yard. After an incomplete pass from Morris on third down, the Mean Green faced 4th-and-9 from the Army 24-yard-line.

On the game’s final play, Morris was flushed to his right and forced to heave one toward the goal line. The ball was batted down as Army claimed its first bowl win in more than three decades.

Army answered with three straight touchdowns, but each time, the 2-point conversion was failed. Tyler Campbell followed Wilson’s touchdown with a 70-yard scoring run. That was followed by a 1-yard run from Woolfolk and a 6-yard scamper from Andy Davidson.

North Texas trailed 24-7, but cut the deficit to three with two touchdowns over the final two and a half minutes of the first half. Wilson’s second 22-yard touchdown run was followed by Morris’ 27-yard touchdown toss to Rico Bussey Jr.

Army led 24-21 at the break. In the third quarter, the teams traded touchdowns.

Bradshaw’s 65-yard run was followed by an 18-yard scoring strike from Morris to Tyler Wilson.

Army finished with 533 yards of offense in the win. Bradshaw and Woolfolk rushed for 129 and 119 yards, respectively. Campbell added 88 yards rushing on just four carries.

Army threw just four passes in the win. For North Texas, Morris tossed for 304 yards in the loss with three touchdowns and one interception.

For Army, the win began a stretch of three straight seasons with a bowl victory. That streak started with its first bowl win since topping Illinois in the 1985 Peach Bowl. It came on this day five years ago.