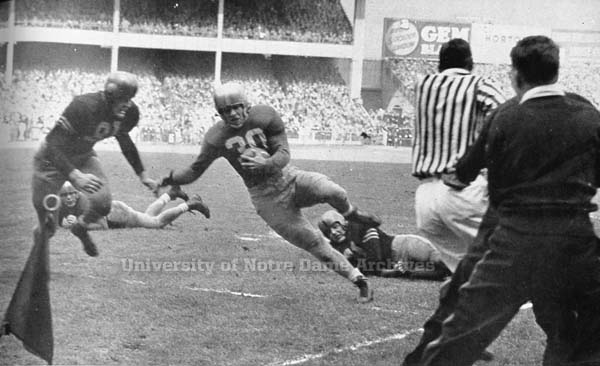 Any time that a regular-season college football contest between No. 1 and No. 2 occurs, it almost always gets the “Game of the Century” distinction. That was the case on this day 75 years ago.

No. 1 Army and No. 2 Notre Dame met in a contest at Yankee Stadium that had plenty of hype. One thing that it didn’t have?

The two teams played to a scoreless tie, leading one headline to read the next day: “Much Ado About Nothing-Nothing”.

All other victories had come by at least 19 points. Army was known for its dynamic backfield of Glenn Davis and Doc Blanchard. The Black Knights entered the contest riding a 25-game winning streak.

Notre Dame had perhaps been even more dominant in 1946. The Fighting Irish were a perfect 5-0 with two shutouts. Notre Dame had not played a game decided by fewer than 20 points and had not allowed more than six in any contest.

As for the game itself, although, there were no points, there were opportunities and excitement.

For Notre Dame, its best scoring opportunity came in the second quarter. With 4th-and-2 from the Army 4-yard-line, Notre Dame head coach Frank Leahy elected to keep his offense on the field. Bill Gompers got the carry for the Fighting Irish, but was stopped short.

Notre Dame quarterback Johnny Lujack was one of the nation’s best, but was intercepted three times by Army’s Arnold Tucker. Back then however, many players played both ways and Lujack made one of the game’s biggest plays defensively.

On a long run from Blanchard in the second half, Lujack was all that stood in between the reigning Heisman Trophy winner and the end zone. He took out Blanchard’s legs on a touchdown-saving tackle. Army continued to march, but Terry Brennan wound up intercepting Davis deep in Fighting Irish territory during what would be the last real scoring threat for either team.

Although neither program was particularly happy with the tie, both would go on to claim national championships. Notre Dame would never hold the No. 1 ranking until the final AP Poll of the year after the Fighting Irish topped USC in the regular season finale. That same week, Army struggled in a 21-18 victory over unranked Navy.

After claiming the AP national title in each of the previous two years, the Black Knights were proclaimed national champions by six selectors. Davis went on to become the program’s second Heisman winner in as many years.

Neither Blanchard nor Davis would ever lose a game in their legendary Army careers. There was one tie, however. It came on this day three-quarters of a century ago.