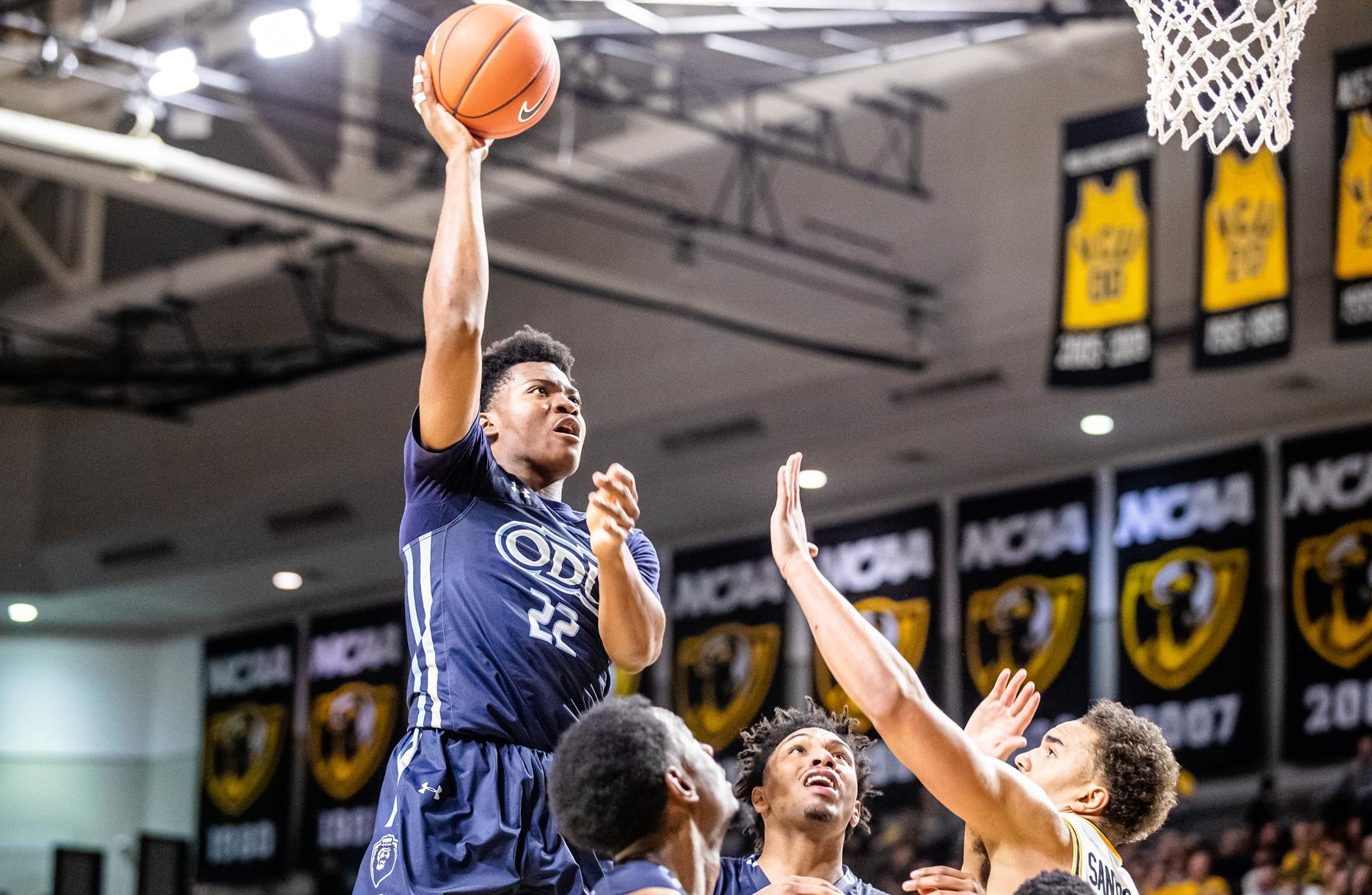 Coming into the season, Old Dominion junior forward Kalu Ezikpe was asked to step up by head coach Jeff Jones.

While Ezikpe has played decent, the problem is that turnovers and his inability to stay out of foul trouble has had an adverse effect on the Monarchs.

As for Jones, he may not be happy with the expected star of the program.

Speaking after the 66-62 win over Northeastern, a game ODU should have won by a bit more, Jones expressed frustration in the junior from Lawrenceville, Ga.

“Yes, at times,” Jones said when asked if he had seen what he wanted out of Ezikpe. “I think he made a couple of nice plays early on and then, he wasn’t the only one, we got fatigued. There was a stretch there without any fouls or any dead balls and both teams were really sucking wind. Rather than having the physical or mental toughness to lock in, we gave in to fatigue; I think that happened to Kalu. Finally, I was forced to use a timeout, which I wasn’t crazy about doing, just to get fresh guys in there.”

The frustration was enough to force Jones to bench Ezikpe. The forward took a seat at the beginning of the second half against Northeastern on Dec. 20. It was the next-to-last contest for ODU before the break.

“From that point, I didn’t think Kalu really had the kind of intensity that we wanted,” Jones added. “At halftime, I told him, ‘I’m not playing mind games; I’m simply telling you I’m starting Austin Trice in the second half because I want you to get angry, get mad at me, get mad at something. I want you to play like a man possessed out there.’

“It wasn’t a perfect second half but I thought he bounced back and played a lot better,” Jones wemt on to say. “Kalu is very bright and sensitive and sometimes players can be too smart, too much of a thinker for their own good. I think right now that applies to Kalu; he has to trust he is a good player and let it go.”

In the next game and final game before the break, a win over Division III Virginia Wesleyan, Ezikpe came out hot but racked up two fouls in the first 10 minutes. He was taken off the floor early in the first half. Ezikpe returned shortly after, but played just six first-half minutes in the 77-57 victory.

Ezikpe has 15 points but he needs to be able to be out there for the Monarchs. It may not end up mattering against VWU, but once the #Monarchs reach C-USA play it could be a problem.

Ezikpe was taken off the floor after his fourth foul in the Monarchs’ closer-than-expected win over Virginia Wesleyan. He finished with 15 points on 7-for-8 shooting with five rebounds. It was an impressive stat line, considering he only played 12 minutes. Austin Trice had the game of his life for ODU, coming off the bench to score 27 points and grab 12 rebounds.

“He got off to a great start; I thought he played extremely well out of the gates. Defensively, he was doing (well) rebounding the ball; he started us off scoring and being strong in the post,” Jones said of Ezikpe’s start to the game, which included nine points on 4-for-5 shooting with four boards in the first half. “He just gets these fouls. One of them might be a good one but the other three just seem to be those ticky-tack out-of-position and not being ready and reacting to the offense.

“He (Ezikpe) really is a key for us,” Jones added. “I probably sound like a broken record talking about what we think he can give us; we need that if we are going to be a quality team. He’s just got to learn; this isn’t the first time it’s happened, but in past years, we weren’t asking as much from him, so maybe it wasn’t as significant if he got into foul trouble a year ago, but it’s tough.”

Jones would like to be able to play Ezikpe and Trice, whose performance against Virginia Wesleyan, should not go unnoticed as a tandem. That could be fun to watch. Having one of the two constantly in foul trouble however, makes it difficult.

“In practice, we’ve been trying to work playing Kalu and Austin (Trice) together, but right now, we just don’t have much opportunity to do so because seemingly Kalu is always in foul trouble,” Jones said. “So we can’t play them both together because Austin is having to replace Kalu.”

It’s clear that if ODU wants to have the kind of season Monarch fans can be happy about, and one that Jones and the team can be proud of, Ezikpe needs to put it all together and be the kind of player he is capable of. Ezikpe is a smart, dynamic scorer. The problem is he can’t score while on the bench in foul trouble.

It seems evident that Ezikpe is in need of a spark. Perhaps the benching against Northeastern is what that will provide. Being forced to sit while Trice had a career-night could also be a positive coming out of the holiday break.

It hasn’t all been doom and gloom for Ezikpe. Ezikpe shined in a 77-54 loss to Virginia Commonwealth. He played a good 24 minutes, scoring 12 points on 5-for-10 shooting with only one foul and four boards. With junior guard Jason Wade out for the season, Ezikpe needs those nights to come with more regularity.

ODU currently sits at 4-2 on the young season. After nine days off, the Monarchs turn their attention to Conference USA play, which starts this week. ODU plays at Florida International on Friday and Saturday.