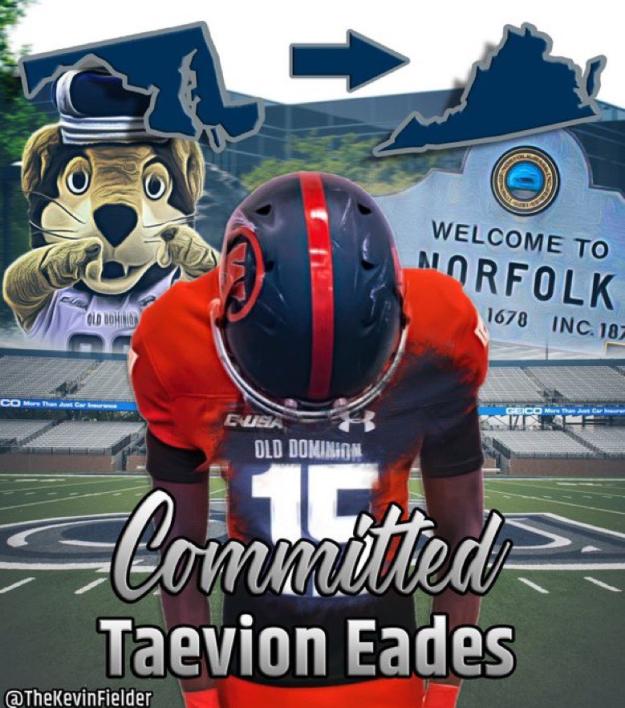 Call Ricky Rahne and the new Old Dominion coaching staff butter, because they are on a roll.

First, the recent flurry of commits and then last week’s addition of five-star transfer Ricky Slade.

Now, Rahne and company can add three-star outside linebacker Taevion Eades, of Wise High School (Upper Marlboro, Mary.) to the 2021 class. He committed after narrowing his list down to two — the Monarchs and Massachusetts.

For Eades, there were a few factors playing in ODU’s favor.

“When we got in the meeting, I was a lot more comfortable,” Eades said. “ODU is not way too far from home and is a bigger opportunity for playing against bigger schools and the new staff and all the accolades they have over UMass is great.”

Among the other teams at one time courting Eades were Howard, Morgan State, Sacred Heart, Toledo, and fellow Conference USA school North Texas. Eades also had interest from Kansas, Arizona State, Army, and Boston College but no offers from those schools.

While Eades can’t currently visit ODU in person due to the dead period mandated by the NCAA in the wake of the COVID-19 outbreak, he has been able to take part in a virtual visit — a growing trend among recruits.

“It (virtual visit) was really nice,” Eades commented. “It had the biggest weight room I’ve seen through the schools I’ve seen.”

With Eades added to the board, the Monarchs have seven on the board for the 2021 class. This is certainly a strong start for Rahne and his staff in their first full recruiting cycle.