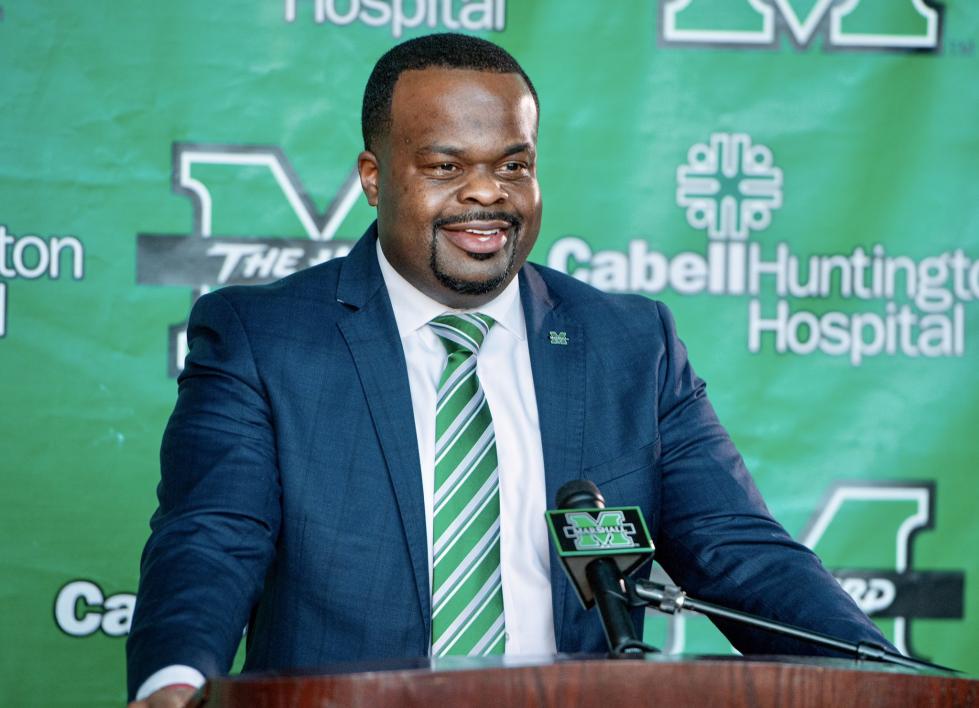 This past weekend, Alabama running backs and associate head coach Charles Huff was introduced as the next head football coach at Marshall.

Huff is now the 31st coach in Marshall history. He comes into a successful program with a history and story like no other.

But who is Charles Huff? We take a look at his career leading up to his new job in Huntington.

In 2001, a young Huff walked on at Hampton as a fullback. During his introductory press conference at Marshall, he discussed how he could relate to every player he coaches today.

He talked about having to go through position and coaching changes. Huff is no stranger to hard work. By his senior year for the Pirates, he had earned a starting position at center and was named a team captain.

After his playing days, Huff began his coaching career at Tennessee State. There, Huff worked under his former coach from Hampton, Fred Kaiss. He started as the offensive line coach in 2006. The following season, Huff served as tight ends coach and special teams coordinator.

In 2009, Huff was granted his first Power 5 opportunity. He left Tennessee State to become the assistant offensive line coach at Maryland. After spending a year at each Maryland, back at Hampton, and then Vanderbilt, Huff found himself coaching running backs in the NFL.

He was named the assistant running backs coach for the Buffalo Bills in 2012. There, he worked with C.J. Spiller and Fred Jackson.

In 2013, Huff came back to college football to join first-year head coach P.J. Fleck at Western Michigan. In 2014, Huff reunited with his former offensive coordinator from Maryland — Penn State head coach James Franklin. It was there that Huff established himself as a great recruiter, playing a major role in the signings of future NFL backs Miles Sanders and Saquon Barkley.

His work would lead to him being hired by new Mississippi State head coach and another former offensive coordinator Joe Moorhead. Moorhead had served as coordinator at Penn State during Huff’s time in State College.

After a season of coaching the Bulldogs, Huff stayed in the SEC West, but earned his biggest role yet. Huff was tabbed as the new running backs coach and associate head coach by Nick Saban at Alabama. Huff found immediate success on the field and in recruiting. He played a key role in bringing in Heisman Trophy winner DeVonta Smith, and ended his tenure at Alabama with a national championship.

That brings us to the present day. With his introduction earlier this week, Huff becomes the first Black head coach in Marshall history. He has not been in Huntington long, but has already made a great impression on the community and program.

Huff has been seen enjoying coffee from local shops, and meeting with media and fans. In his first press conference, Huff was very clear with what he wants from this program, showing passion and emotion when talking about his journey and what it took to get here.

He gained the attention of many fans by discussing the type of offense he wants to bring to Marshall. He described it to be similar to what was run at Alabama last year, containing run-pass options and dropback pro-style plays.

It remains to be seen whether Huff can duplicate the success of Jim Donnan, Bob Pruett or more recently, Doc Holliday. For now, there is no shortage of excitement for what the future holds for the Thundering Herd.