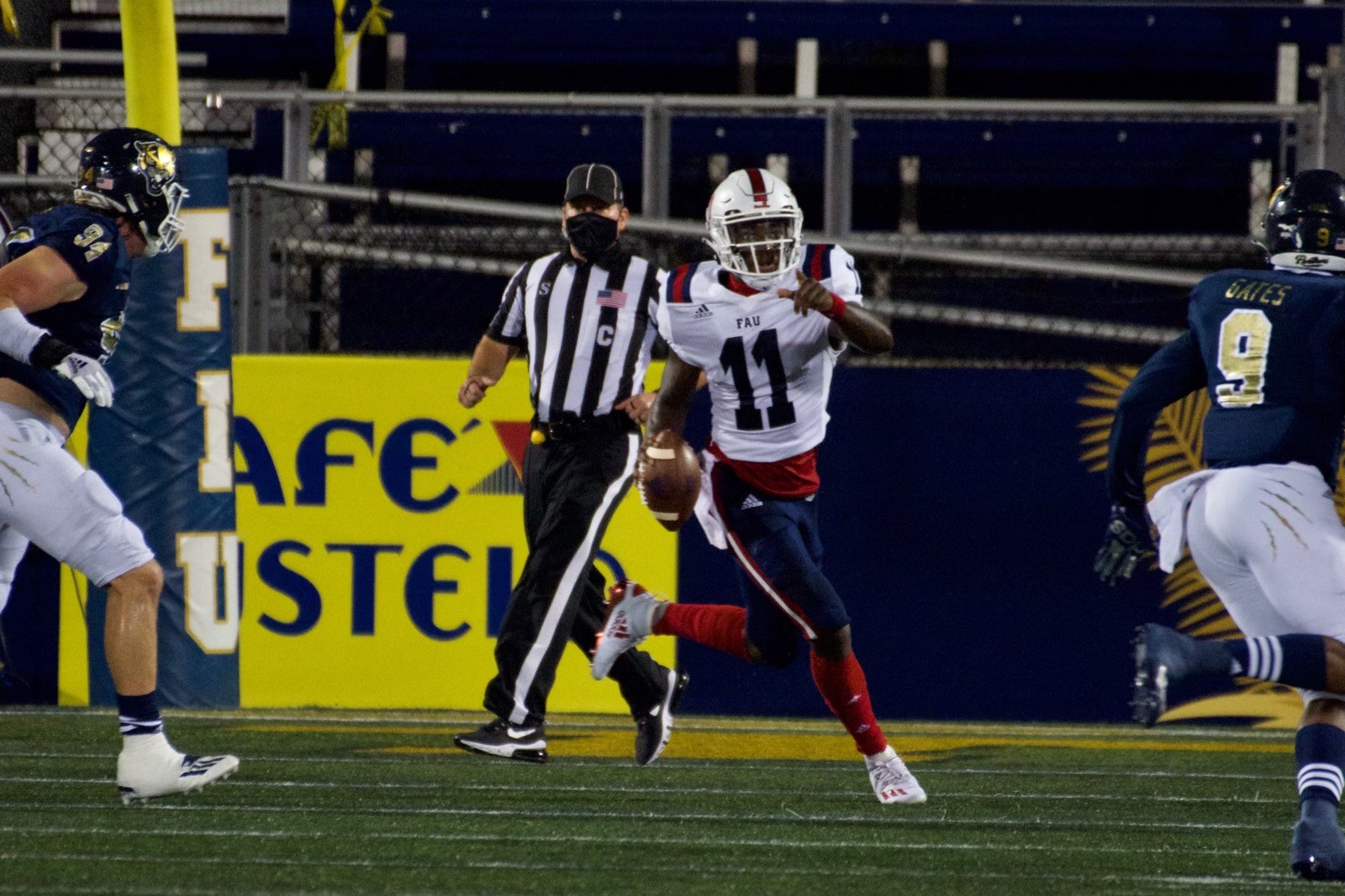 To steal a phrase from former SportsCenter anchor Stuart Scott – This is Javion Posey’s world, the rest of us are still paying rent.

Some things just come easy for players and for Posey, it seems to be playing quarterback. Posey was as dominant as they come against Florida International on Friday night, even if it was only his first career start.

The redshirt freshman helped lead Florida Atlantic’s offense to its best output of the year, gaining 462 yards of total offense (6.8 yards per play). The offensive outburst was a welcome sight for the Owls, who took home the Shula Bowl Trophy for a fourth consecutive season with a 38-19 victory.

By all accounts, Posey earned the Shula Bowl MVP honors that were presented to him postgame. Posey finished the game with a team-high 262 yards (80 passing, 182 rushing) and three touchdowns. What Posey brought to FAU’s offense, however, went deeper than his stats.

When asked to grade Posey’s overall performance, head coach Willie Taggart gave Posey a “B” grade. While his performance was impressive, there’s still another level for Posey to reach. There were mistakes, including a fumble in the second quarter, but the performance was a promising sign of things to come.

“For it being his first ballgame, I’d give him a ‘B’,” Taggart told the media on Monday. “I just think he has some great football ahead of him. As he gets comfortable with everything and the more reps he gets and the more comfortable everyone gets with him, I think you’ll see more out of him.”

Every time Taggart talked about Posey, even before the FIU performance, a common theme stood out.

Taggart saw a similar ability from quarterback Quinton Flowers, who Taggart coached at South Florida. Flowers finished his college career with 3,672 rushing yards and 42 touchdowns, averaging 6.1 yards per carry. Flowers simply changed games with his feet. When the Bulls needed a big play, it often came from the feet of Flowers, who looked more like a video game character than a football player.

“They’re very similar … Just watching those guys run, they’re explosive,” Taggart said when comparing the two. “They’re just different with the football. It’s hard to tackle them; they can stop and start. Those guys, they make things right. You don’t necessarily have to block everything perfectly and they can make some things happen for you. They’re a joy to watch — highly competitive and they both are winners.”

Posey’s running performance can be broken down into two categories – the designed runs and the improvisational runs. While Posey had plays specifically designed for him to run the football, there were times where Posey was required to improvise and make plays.

In both circumstances, Posey shined. Posey wasn’t a one-trick pony against FIU. In fact, he was far from it.

Not everything in football is perfect; it usually never is perfect. And when things aren’t perfect, teams rely on big-time players to make big-time plays.

It was Posey who made those plays for FAU on Friday. Like a ballet dancer, there were plenty of plays where Posey danced around in the pocket and made guys miss. These plays where Posey improvised turned into some of Javion Posey’s best highlights and they happened often.

When FAU lines up in an empty set, the Owls’ offensive line fails to pick up the blitz from FIU linebacker Jamal Gates. As he faces almost immediate pressure, Posey is able to step up in the pocket and sidestep out of it. Posey then breaks the arm tackle attempt by the FIU defensive back, before putting his foot in the ground and delivering a timely juke to get the first down.

There are things in this play that you simply can’t teach in a single offseason or even a career. Posey is timely with his footwork and understands the pressure. Despite being a redshirt freshman, Posey isn’t panicked in the pocket and remains calm while keeping his head up in case someone breaks free. The result of the play is a big one, as it moves the chain on a third down.

Simply put, Posey is hard to bring down. He isn’t your normal quarterback in that sense. This innate ability to run isn’t teachable; a quarterback either has it or they don’t.

Michael Vick had it, Lamar Jackson and Kyler Murray have it, and it’s clear that Javion Posey has it.

Despite it being Posey’s first career start, there were certain things that he understood from a quarterbacking standpoint.

Posey understood the pocket and had an innate ability to produce big-time plays. Facing blindside pressure, Posey showed the poise of a veteran quarterback and understood how and when to shift his feet and body to make the play.

When Posey gets into space, it’s hard to bring him down. The combination of strong contact balance and breakaway speed makes Posey a threat in open space that is comparable to a running back. That element is unmatched at the quarterback position for FAU.

When FAU asked Posey to make the right read on a read option, or make a play on any designed quarterback run, Posey had the ability to understand how to read the right play.

Posey may only get six yards on this run but like a seasoned veteran, Posey understood the play and how to execute it. The play design isn’t complicated and Posey is only asked to read the playside defensive end (No. 90, bottom of screen).

Posey, however, keeps his eyes fixated on the defensive end until the final second. If Posey drops his eyes and pulls the ball quicker, the possibility of a blown up play in the backfield is likely. Posey understands that and keeps his eyes locked until the last possible second.

These kind of plays don’t make the highlight tape but they’re important plays in the larger scheme of things.

Posey has the liveliest arm of all of FAU’s quarterbacks. There are still certain intricacies that Posey needs to figure out as a quarterback.

Too many times, Posey would launch the ball without much touch. While it leads to overthrown passes and dropped balls, this isn’t surprising for a young quarterback.

On this throw, Willie Wright has plenty of space on the FIU cornerback. With his speed, this should be an easy touchdown and a huge play for FAU. Posey, however, doesn’t put any touch on the throw and rather throws a rocket. With some touch, this throw ends up right in the hands of Wright for the touchdown.

This isn’t necessarily a concern, though. Posey’s only college offseason at quarterback was delayed and shortened. Simply put, the time with Taggart and quarterbacks coach Clint Trickett was limited. With a proper offseason, Posey will learn how to deliver the proper throw with an element of touch.

Wrap Up – What Is Javion Posey’s Ceiling?

It almost seems weird to place a ceiling on Javion Posey, who has a total of 90 college snaps under center. Even in the limited action, though, the potential of Posey’s play seeps through on every single drive.

Posey is there as a runner. He’s a natural threat on any single play and can hit the home run whenever the ball is in his hands. There still needs to be some cleaning up, (the fumble against FIU was poor where Posey quickly recovered) but that will come with experience as a quarterback.

Posey needs an entire offseason at quarterback. The arm needs to develop, which should come if FAU gets the entire offseason next year. With the proper arm development, Posey has the potential to be an FAU legend.