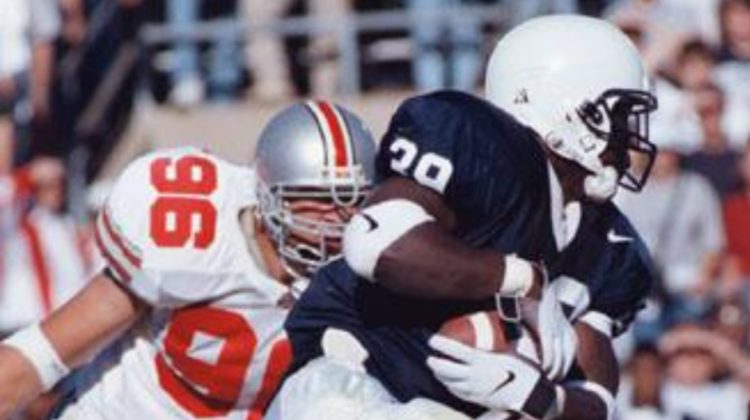 Throughout the course of the 1997 season, three different Big Ten teams spent time in the top 10.

The first meeting between them took place on this day 25 years ago. In front of more than 97,000 people, Penn State scored the game’s final 14 points to top Ohio State in a game of runs, 31-27.

Ranked preseason No. 1, Penn State was ranked second as it arrived at the friendly confines of Beaver Stadium on Oct. 11, 1997. At 5-0, Penn State had not played a game decided by fewer than 17 points.

Ohio State was also 5-0 and ranked No. 7. The Buckeyes were coming off an impressive 23-7 win over Iowa. Ohio State had cruised to a 38-7 victory over the Nittany Lions the year prior in Columbus.

While Ohio State put up big numbers through the air, Penn State did likewise on the ground. Trailing by 10, Penn State fullback Aaron Harris powered his way to a 51-yard touchdown — his second of the day — late in the third quarter to cut the lead to 27-24. Less than five minutes into the final period, Penn State went ahead for good on Curtis Enis’ 26-yard touchdown run.

After being bottled up the year prior, Enis finished with 211 yards rushing on 23 carries. 114 of those yards came in the final quarter.

On a day where the teams combined for more than 1,000 yards, the Penn State defense came up big when it had to. Shawn Lee knocked away a Germaine fourth-down pass with 2:24 left to preserve the victory.

Following the win, Penn State ascended to No. 1 in the polls. After hard-fought wins over Minnesota and Northwestern, Penn State fell to eventual national champion Michigan. The Nittany Lions closed the year with losses to Michigan State and then Florida in the Citrus Bowl to finish 9-3 and No. 16 in the polls.

Ohio State bounced back to win its next five games before losing at Michigan in a contest that would ultimately decide the Big Ten. The Buckeyes finished 10-3 and No. 12 in the polls after falling to Florida State in the Sugar Bowl.

Ohio State would top Penn State the following year in another top-10 showdown. While the 1997 contest didn’t decide the Big Ten, it was one for the ages. It came on this day a quarter-century ago.