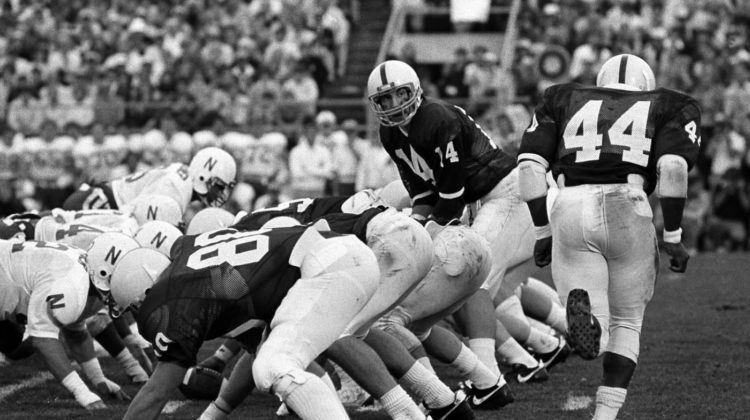 Now each members of the Big Ten, Nebraska and Penn State each have rich football histories. Even prior to sharing a conference, the teams met 13 times on the gridiron, including in five straight seasons from 1979 to 1983.

The closest meeting over the stretch and in series history came at State College on this day 40 years ago. In a top-10 matchup, Nebraska rallied from 14 points down to take the lead, but a last-second touchdown was the difference as the Nittany Lions prevailed, 27-24.

Penn State was ranked eighth in the country and off to a 3-0 start as it arrived at Beaver Stadium on Sept. 25, 1982. To that point in the season, however, it had not played a ranked opponent.

Ranked No. 2 in the country, Nebraska had defeated its first two opponents by a combined 110-7 margin. Looking to avenge a 30-24 loss to Penn State in Lincoln the year before, the Cornhuskers stormed back to take the lead late.

Controversy and a Winning Touchdown

Midway through the third quarter, Penn State seemed to be in control. Todd Blackledge’s second touchdown pass of the day — an 18-yard toss to Kenny Jackson — gave Penn State a 21-7 lead. That’s when quarterback Turner Gill and the Nebraska offense found their rhythm.

After Gill’s short touchdown toss to Mike Rozier cut the lead in half late in the third quarter, a field goal early in the fourth made the deficit 21-17. Following a defensive stop, Gill orchestrated a masterful 80-yard drive that lasted 13 plays and nearly seven minutes. His 1-yard touchdown plunge gave Nebraska its first lead with 1:18 remaining, 24-21.

With momentum wearing red, Blackledge responded with a masterful drive of his own with some help from a controversial call. After converting a 4th-and-11 with a strike to Jackson earlier in the drive, Blackledge’s 15-yard completion to Mike McCloskey with nine seconds to go put the ball on the Nebraska 2-yard-line. On the play, however, McCloskey appeared to be well out of bounds but was awarded the reception.

On the very next play, Blackledge found Kirk Bowman in the end zone for a second time. The second connection came with just four seconds to go and served as the game-winner. It capped a 295-yard, 3-touchdown performance from Blackledge and a 10-play, 65-yard drive for the Nittany Lions.

Gill finished with 239 yards passing and three total touchdowns in the loss. Rozier led all rushers with 86 yards. Nebraska’s Irving Fryar was the top receiver with seven catches for 112 yards and a score. Penn State’s Curt Warner finished with 73 yards rushing and a touchdown.

For Nebraska, the defeat would be its lone blemish during the 1982 season. The Cornhuskers won their final 10 games, including a victory over LSU in the Orange Bowl, to finish 12-1 and No. 3 in the final AP Poll.

Penn State would slip up a week later against Alabama in Birmingham but won its final seven games. After defeating No. 1 Georgia in the Sugar Bowl, the Nittany Lions claimed the national championship at 11-1.

Penn State would knock off five ranked opponents in 1982, including three top-5 foes. Fans in State College and Lincoln were left to wonder how the season may have been different without the controversial catch by McCloskey late in the contest on the final Saturday in September. It came on this day four decades ago.