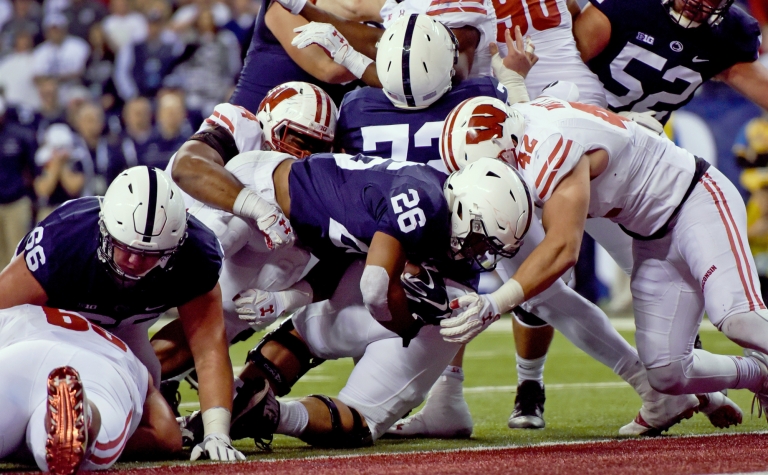 Since the inception of the Big Ten Championship game, only one team has a perfect record in that contest. It played in just one such game, but made a comeback for the ages.

That rally came on this day five years ago. Penn State overcame a 21-point first-half deficit to knock off Wisconsin, 38-31.

After a 2-2 start to the season, Penn State arrived in Indianapolis on an 8-game winning streak. The Nittany Lions were one of college football’s hottest teams. With a 10-2 record, they were ranked No. 8.

Wisconsin was also red hot as it made its way to Lucas Oil Stadium. After back-to-back losses to begin October, the Badgers had won six straight games. Also at 10-2, Wisconsin was ranked sixth in the country and appeared to be making a statement early on.

By the latter parts of the second quarter, it didn’t appear as though it would be Penn State’s night. The Badgers raced to a 28-7 lead behind touchdown runs from Austin Ramesh, Corey Clement, Dare Ogunbowale and a fumble recovery in the end zone from Ryan Connelly.

Down 21 points and backed deep in its own territory, a late second-quarter touchdown drive shifted the momentum of the contest. Penn State had turned the ball over twice and once more on downs when quarterback Trace McSorley led the Nittany Lions 90 yards in just over a minute. His 40-yard scoring strike to Saeed Blacknall cut the lead to 14 at the break.

The second half was a little more than 10 minutes old when Penn State drew even. After a missed Wisconsin field goal, Penn State scored on its first play of the third quarter. McSorley and Blacknall again hooked up for a long touchdown — this one from 70 yards away.

After forcing a 3-and-out, Penn State turned to running back Saquon Barkley. Barkley carried four times and capped an 8-play drive with a 1-yard touchdown to knot the score at 28. Before the quarter was over however, the Badgers had moved back in front on Andrew Endicott’s short field goal.

The next two Penn State drives however, resulted in scores. It took just four plays for the Nittany Lions to go ahead for good. After hitting DaeSean Hamilton for two long passes, McSorley found Barkley for the 18-yard touchdown early in the fourth period.

The Penn State defense would do the rest. After forcing a punt, Tyler Davis kicked a short field goal to push the lead to 38-31. The ensuing Wisconsin possession reached the Penn State 24-yard-line, but on 4th-and-1, Clement was stuffed with a minute remaining to seal the win.

The comeback was led by McSorley’s monster effort. The Penn State quarterback passed for a Big Ten Championship record 384 yards and four touchdowns. Blacknall (155) and Hamilton (118) each eclipsed the 100-yard mark receiving.

Wisconsin came up short despite 241 yards rushing. Clement led the way with 164 yards.

Both schools would go on to play in New Year’s Six bowls. In the Rose Bowl, it was Penn State that let a big lead slip away. The Nittany Lions took a 14-point lead into the final quarter before falling to USC, 52-49.

Wisconsin would bounce back to knock off undefeated Western Michigan in the Cotton Bowl, 24-16. At season’s end, both teams finished 11-3 and ranked in the top 10.

Penn State has not returned to the Big Ten Championship since, but still holds the contest’s record for biggest comeback. It came on this day five years ago.