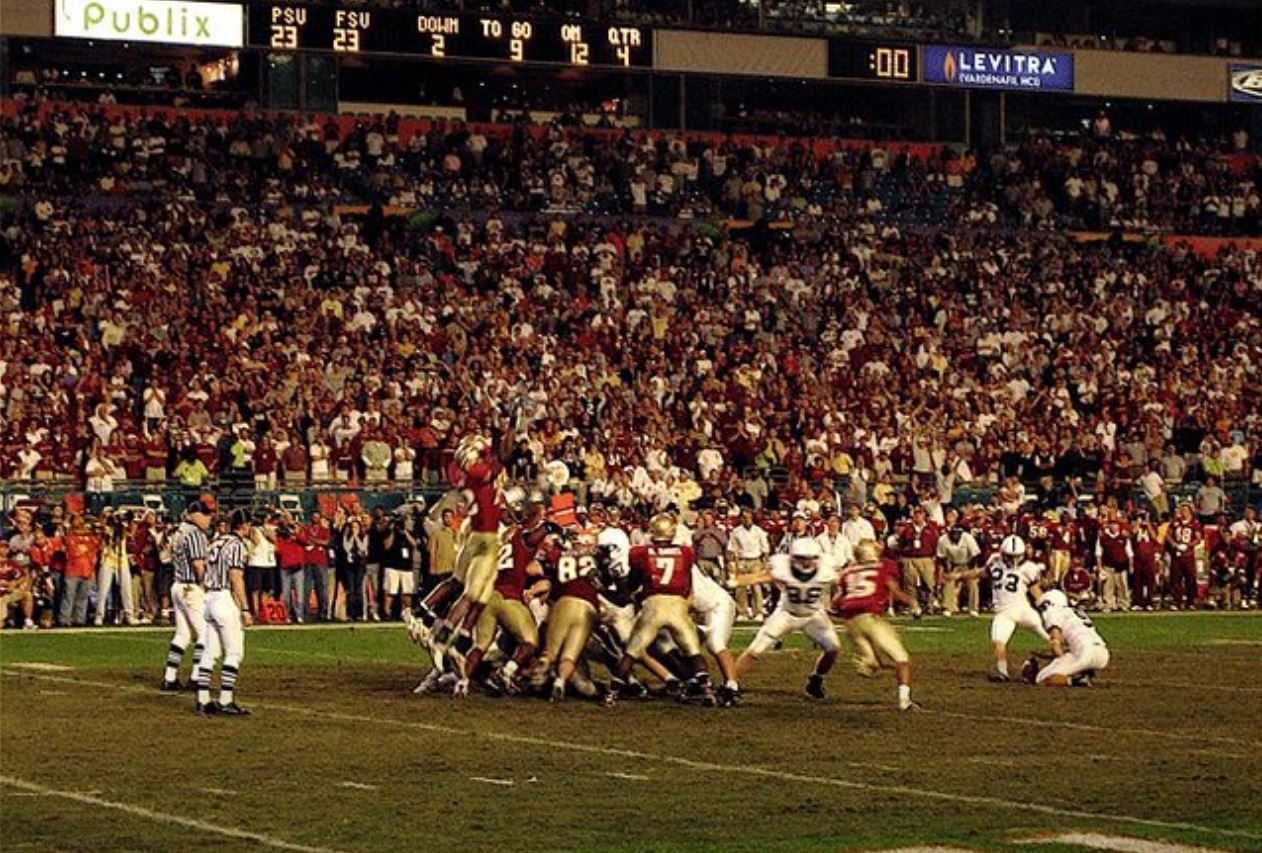 Although their teams tended to be near the top of the polls for much of the late-1980’s and throughout the 1990’s, Penn State legendary head coach Joe Paterno and Florida State legend Bobby Bowden squared off just twice while at their respective schools.

Both meetings were bowl games in Miami. Bowden’s Seminoles got the better of Penn State in a battle of top-10 teams in the Blockbuster Bowl to cap the 1990 season. On this day 15 years ago, Paterno and the Nittany Lions topped FSU in the Orange Bowl a triple-overtime thriller for the ages, 26-23.

Penn State was 10-1 and ranked No. 3 as it arrived at Dolphin Stadium on Jan. 3, 2006. The lone blemish for Penn State was a loss to Michigan on the game’s final play in Ann Arbor. Big Ten champions for the first time since 1994, Penn State entered as a 9-point favorite.

For Florida State, its path to Miami was much different. After a 7-1 start, FSU dropped its final three regular season games. The 22nd-ranked Seminoles ultimately were able to circle the wagons with a 27-22 upset of No. 5 Virginia Tech for their 12th ACC title in 14 years.

The first half saw each team score a pair of touchdowns. Austin Scott scored from two yards out to give the Nittany Lions the lead about 10 minutes in, but FSU struck twice in an 80-second window late in the second quarter.

As he had against Virginia Tech, Willie Reid ignited FSU with a punt return for a touchdown. His 87-yard return with less than five minutes to play in the first half evened the contest. Following a 3-and-out by Penn State, it took just one play for Florida State to take its first lead.

With the ball at his own 43-yard-line, FSU quarterback Drew Weatherford flipped a short pass to speedy Lorenzo Booker out of the backfield. Booker did the rest, outracing defenders for a 57-yard touchdown. Gary Cismesia’s extra point attempt was no good as the Seminoles settled for a 13-7 lead.

It looked as though FSU would take a lead into the locker room, but with less than 20 seconds to play in the half, Penn State started with favorable field position. Following a completion for a first down, Michael Robinson was able to hit a leaping Ethan Kilmer for the go-ahead 24-yard touchdown with just six seconds remaining in the half.

In the second half, it was the defenses that dominated. After a scoreless third quarter, Weatherford was called for intentional grounding in his own end zone early in the fourth. Penn State led 16-13 and was on the verge of putting the Seminoles away.

The Nittany Lions took the ensuing drive to the FSU 5-yard-line. On 1st-and-goal however, Robinson fumbled and the Seminoles had new life.

FSU was able to escape the shadow of its own goal post before a 39-yard pass from Weatherford to Chris Davis moved FSU into Penn State territory. A holding penalty would ultimately kill FSU’s hopes of taking the lead, but Cismesia atoned for his extra point miss with a 47-yard field goal that knotted the game with more than four minutes remaining.

On Penn State’s final drive of regulation, Robinson was surgical. Robinson found Isaac Smolko for 20 yards on 3rd-and-14 before hitting Jordan Norwood for 38 yards on the next play. Inside the FSU 15-yard-line, Penn State proceeded to milk the lock before sending out kicker Kevin Kelly for a 29-yard field goal attempt.

Kelly had been 15-for-20 on the season coming in, but his heroics would have to wait. The kick sailed wide and the contest went to overtime.

The Penn State defense continued to dominate in the extra session. FSU was pushed back to the 27-yard-line. Cismesia’s go-ahead attempt was no good, meaning all that Penn State needed to win was a field goal.

After three straight runs, Kelly was given a shot at redemption — this time from 38 yards. Again, his kick sailed wide.

But what Penn State did in five plays, FSU did in four. Completions from Weatherford to Reid and Greg Carr put FSU on the goal line. Fullback B.J. Dean scored from a yard out to force a third overtime.

In the third overtime, the Penn State defense stiffened. After consecutive incomplete passes, Cismesia was again tasked with hitting a big kick. His 38-yard attempt was no good. Again, Penn State had a chance to win.

After Robinson used his legs to convert a third down, Kelly was given a third chance. His 29-yard field goal sneaked inside the right upright. Finally, Kelly had delivered the Nittany Lions. Penn State left the Orange Bowl with a 26-23 victory.

Following the hard-fought victory, FSU dropped just one spot in the final poll. The Seminoles finished 8-5. The 2005 season would be the final ACC championship season for FSU under Bowden and the Orange Bowl appearance would his final BCS game.

As for Penn State, it finished third in the final polls. It marked Penn State’s last top-5 finish under Paterno with the Orange Bowl serving as his only BCS bowl win of the Bowl Championship Series era. It came in thrilling fashion on this day 15 years ago.