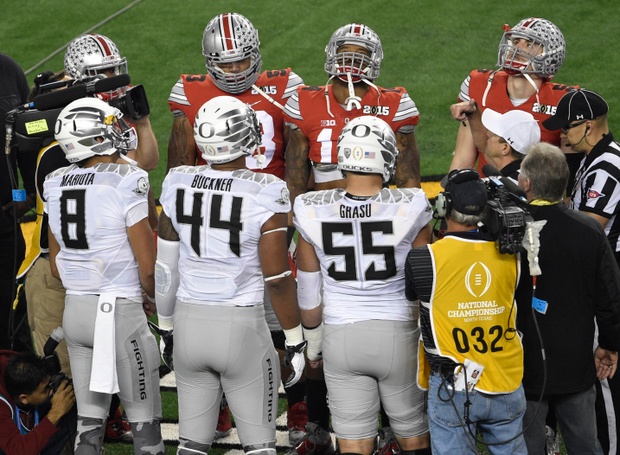 As most may recall, the first national champion of the College Football Playoff era was Ohio State. To cap the 2014 season, the Buckeyes knocked off Oregon in Arlington for college football’s ultimate prize, 42-20.

After earning the bid as the No. 4 seed, Ohio State made the title game by rallying from 15 points down to top Alabama in the Sugar Bowl, 42-35. Meanwhile in Pasadena, Oregon was ending reigning national champion Florida State’s 29-game winning streak with a dominating 59-20 victory in the Rose Bowl.

Led by Heisman Trophy winner Marcus Mariota, the Ducks actually entered the title game as a 7-point favorite. Oregon however, had no answer for Ohio State running back Ezekiel Elliott.

Elliott finished with 246 yards rushing and four touchdowns as the Buckeyes seized control from the second quarter on. The Ducks’ potent offense put up 465 yards, but struggled late as the Buckeyes scored the contest’s final 21 points.

For the first time since the contest, the teams are set to meet on Saturday in Columbus. The Ducks come in ranked No. 12 as they look to knock off third-ranked Ohio State. Here’s a look at how each school has fared since the game to decide the 2014 national championship:

Oregon: 46-27 (.630)
Ohio State: 69-8 (.896)
Overview: Ohio State has won nearly 90% of its games since the national title game. Oregon immediately experienced a drop-off under Mark Helfrich, but seems to have gotten back on track in recent years.

Oregon: 3 (Mark Helfrich, Willie Taggart, Mario Cristobal)
Ohio State: 2 (Urban Meyer, Ryan Day)
Overview: Both current head coaches actually had stints as interims before getting the job. Ryan Day was the head coach for three games while Urban Meyer was suspended in 2018 before getting the job following Meyer’s retirement. Oregon’s Mario Cristobal coached the Las Vegas Bowl after Willie Taggart left for Florida State following the 2017 season before being the permanent hire in Eugene.

Oregon: 2 (2015, 2019)
Ohio State: 6 (2015-20)
Overview: Ohio State has finished ranked in every season since winning the national championship and not lower than sixth in any of those seasons. For Oregon, it has finished ranked just twice since playing for college football’s ultimate prize. In 2019 however, the Ducks did finish in the top five.

Oregon: 2 (2019, 2020)
Ohio State: 4 (2017-20)
Overview: Technically, Ohio State has won a share of the Big Ten East in each of the last six seasons, but lost the tiebreaker to Michigan State in 2015 and Penn State in 2016. Oregon has represented the Pac-12 North in the conference title game in each of the last two seasons, but actually finished behind Washington and Stanford last season.

Oregon: 2 (2019, 2020)
Ohio State: 4 (2017-20)
Overview: Both Oregon and Ohio State have won the last two conference titles games in their respective conferences. The Buckeyes have actually won four straight. Since the inception of the Big Ten Championship in 2011, Ohio State has played in six of the 10 title games and won five. It has beat either Wisconsin or Northwestern in each of the last four. Oregon is 4-0 in the Pac-12 Championship with each win coming over a different opponent.

Oregon: 2-3 (.400)
Ohio State: 4-3 (.571)
Overview: Thanks to the inception of the College Football Playoff in 2014, teams can now play two bowls in one season. Ohio State has played in seven bowl games in the last six years, winning four. Last season marked the first time that the Buckeyes reached the national title game since beating Oregon. This time around, it fell to Alabama, 52-24. Oregon did not play in a bowl in 2016, but has won two of its last three bowl appearances.

Oregon: 1-1 (.500)
Ohio State: 4-3 (.571)
Overview: Ohio State has played in a major bowl game every year since 2013. Since winning the national championship, the Buckeyes have wins in four of the six major bowl games. The exceptions are the Orange Bowl and Peach Bowl. Oregon played in its first major bowl and collected its first win since 2014 in 2019 by edging Wisconsin in the Rose Bowl, 28-27. The Ducks lost to Iowa State in the Fiesta Bowl last season, 34-17.

Oregon: 0
Ohio State: 0
Overview: Since the contest for the 2014 title, neither Ohio State nor Oregon have won a national championship. Ohio State played for the crown last season. Oregon has not returned to the playoff.

Oregon: 0
Ohio State: 0
Overview: Oregon quarterback Marcus Mariota won the Heisman Trophy in 2014, but since then, neither the Buckeyes nor Ducks have had a winner. For Ohio State, quarterbacks Dwayne Haskins and Justin Fields finished third in 2018 and 2019, respectively. Not since Mariota has an Oregon player finished in the top 10.

*Oregon finished behind Washington and Stanford in the Pac-12 North, but due to COVID-19 protocols, was given the opportunity to play USC for the Pac-12 Championship.