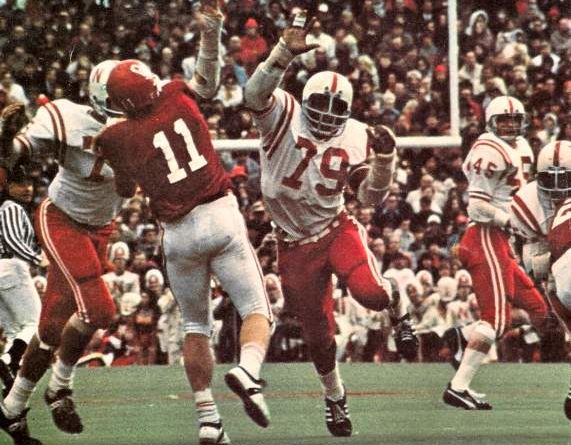 On this Thanksgiving Day, college football fans have much to be thankful for. That was also the case on this day — also Thanksgiving — 50 years ago.

In a matchup of No. 1 vs. No. 2 that lived up to the “Game of the Century” hype, Nebraska and Oklahoma played a contest for the ages. In the end, the Cornhuskers emerged victorious in Norman, 35-31.

Bob Devaney’s top-ranked Cornhuskers were 10-0 as they arrived at Owen Field on Nov. 25, 1971. Despite outscoring opponents by a margin of 389-64, Nebraska was just a 1-point favorite.

No. 2 Oklahoma was 9-0 and had also been dominant. Although not quite as stout defensively as Nebraska, it was Oklahoma who scored more points than any team in the country in 1971.

The Jet Sets the Tone

The contest was hyped as one that featured great offenses and great defenses. On that Thanksgiving afternoon however, it was a special teams play that got the scoring started.

The game was less than four minutes old when Johnny “The Jet” Rodgers electrified the crowd. The Nebraska running back set the tone with a 72-yard punt return that gave his team an early 7-0 lead.

Rodgers would go on to win the Heisman Trophy in 1972, but he was hardly the star of Nebraska’s wishbone offensive attack on Thanksgiving Day in 1971. Fullback Jeff Kinney rushed for 171 yards and four touchdowns. His 1-yard plunge early in the second quarter gave Nebraska a 14-3 lead.

Oklahoma quarterback Jack Mildren was the captain of the ship for head coach Chuck Fairbanks’ offense. Mildren rushed for 130 yards, passed for 137 and was the reason the Sooners were able to take a 17-14 lead into the locker room.

After rushing for a 3-yard touchdown to cut the deficit to four, Milden gave Oklahoma its first lead in the final minute of the second quarter with a 24-yard scoring strike to Jon Harrison. What was once an 11-point deficit was now a 3-point lead for the Sooners. In the third quarter however, it once again became an 11-point deficit.

Kinney scored on touchdown runs of three and one yards to put the Cornhuskers back in front, 28-17. Mildren again had an answer. His second 3-yard touchdown plunge late in the third quarter made it a 28-24 game.

Midway through the fourth quarter, Mildren and Harrison again hooked up for a touchdown. With just over seven minutes remaining, the 16-yard strike staked the Sooners to a 31-28 lead.

Needing a field goal to tie and a touchdown to win, the ensuing Nebraska drive was methodical. The Cornhuskers were able to melt more than five and a half minutes off the clock as they traveled 74 yards in 12 plays. Rodgers picked up a key first down on the march with a 33-yard reception, but with 1:38 remaining, it was fittingly Kinney who powered his way into the end zone from two yards out.

Oklahoma finished with 467 yards of offense to 362 for Nebraska, but when it had to, the vaunted “Blackshirts” defense got the stop. After Larry Jacobson sacked Mildren on third down, Rich Glover batted down his fourth-down pass to seal the victory.

Oklahoma and Nebraska would each play two more games and each would win both. The Sooners closed the year with victories over Oklahoma State and Auburn in the Sugar Bowl. Nebraska blasted Hawaii and then Alabama in the Orange Bowl.

As they were for the Game of the Century, Nebraska finished No. 1 and Oklahoma finished No. 2. Although their seasons ended in New Orleans and Miami, respectively, one might argue that the 1971 national championship was decided on Thanksgiving Day in Norman, Okla. on this day a half-century ago.