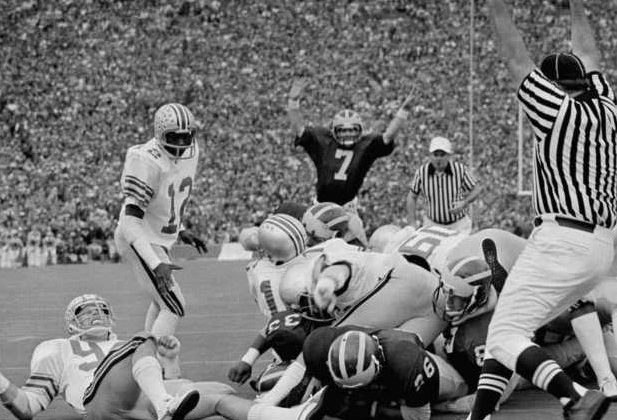 One might argue that it is the greatest rivalry in college football. The contest is referred to simply as “The Game” by some followers — and for good reason.

Bragging rights is always on the line, but it’s not unusual for championships to be as well. That was the case on this day 45 years ago as Woody Hayes’ and Bo Schembechler’s teams squared off during an era of the rivalry known as the “Ten-Year War”.

In a matchup of top-5 teams, it was Michigan who got the better of the Buckeyes in Ann Arbor. In a de facto Big Ten championship, a record crowd saw the Wolverines leave their home field with a 14-6 victory.

More than 106,00 fans — the most ever to see a college football game at the time — packed Michigan Stadium on Nov. 19, 1977. At 9-1 and ranked No. 4 in the country, Ohio State’s only loss had come on a last-second field against Oklahoma in another top-5 showdown early in the season. The Buckeyes arrived in Ann Arbor as winners of six straight.

After shutting out Ohio State 22-0 the year prior, the fifth-ranked Wolverines were looking to win consecutive games in the rivalry for the first time since 1950 and 1951. Ranked No. 1 for the middle parts of the season, the Wolverines had bounced back from a shutout loss to Minnesota with three straight wins by a combined 126-33 margin. They were also 9-1 overall, but the Buckeyes were the only one of the two teams undefeated in Big Ten play.

“The Champions of the West”

Michigan had the touchdowns.

Trailing 3-0 in the second quarter, it was Roosevelt Smith scoring from a yard out to put Michigan ahead for good. The 1-yard plunge capped a 46-yard drive and gave the Wolverines a 7-3 lead.

Michigan’s second touchdown also came after being given a short field. After a fumble by Ohio State’s Ron Springs gave Michigan the ball at the Buckeyes’ 20-yard-line, Rick Leach scored on a keep to extend the lead to 11.

Before the quarter was over, Ohio State had drawn to within eight at 14-6 on Vlade Janakievski’s second field goal. With Ohio State holding a game lead in the Big Ten, a tie would have ultimately sent the Buckeyes to Pasadena. That’s what they were shooting for during a late march.

On the biggest possession of the game, Ohio State had moved from its own 10-yard-line to the Michigan 8. With four minutes to play, another fumble would again prove costly.

On an option call, quarterback Rob Gerald rolled to his right before being leveled by Michigan’s John Anderson. The ball came loose and Derek Howard recovered for the Wolverines on a play that would ultimately seal the victory. The loss came despite Ohio State outgaining Michigan by a yardage advantage of 322-196.

Both schools would go on to lose their bowl games. Ohio State was routed by Alabama in the Sugar Bowl, 35-6. With a 9-3 final record, the Buckeyes finished No. 11 in the AP Poll.

In the Rose Bowl, Michigan came up short to Washington to finish 10-2 and No. 9 in the final AP Poll. In 1977, Michigan and Ohio State finished as co-champions of the Big Ten, but it was the Wolverines’ head-to-head victory that punched their ticket to Pasadena. It came on this day 45 years ago.