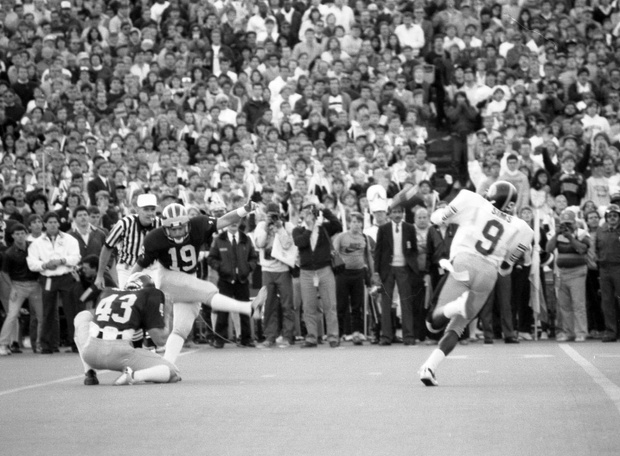 From 1976 to 1992, Michigan and Iowa combined to represent the Big Ten in the Rose Bowl 13 times. That made the annual match-up between the schools a pivotal one.

On this day 35 years ago, the contest lived up to the hype. Michigan kicker Mike Gillette played the role of hero as his field goal as time expired lifted the Wolverines over Iowa in a top-10 match-up, 20-17.

Ranked No. 4, Michigan was a perfect 5-0 as it arrived in Ann Arbor on Oct. 18, 1986. The Wolverines had collected hard-fought wins over Florida State and Notre Dame early in the year and were battle-tested.

Iowa came in ranked eighth and also unblemished at 5-0. The Hawkeyes were giving up less than nine points per game. After beating Michigan on a last-second field goal the year prior, the Hawkeyes were looking for their third straight victory in the series.

As time ticked away, it appeared as though a tie would be a worst-case scenario for Iowa. With the contest tied 17-17 and the ball on Michigan’s side of the field, the Hawkeyes were looking to get close enough for a Rob Houghtlin field goal. The year prior, Houghtlin had connected from 29 yards out to lift Iowa to a 12-10 victory in a match-up of No. 1 vs. No. 2.

With Iowa driving to win however, the game’s seventh turnover would shift momentum. Richard Bass was unable to handle an option pitch from quarterback Mark Vlasic and Michigan’s Andy Moeller recovered just shy of midfield.

Needing just a field goal, Michigan was methodical on the final drive. Jamie Morris was able to bust solid runs of nine and five yards before hauling in a pass for another five. The Wolverines went just 34 yards, but with the ball on the Iowa 17-yard-line and five seconds to go, Gillette came onto the field.

Gillette was typically the long distance kicker, but Pat Moons had struggled. On the previously drive, Moons shanked a 27-yard field goal.

Gillette, who had hit from 53 yards out earlier in the contest, was up to the task. With the ball on the left hash, he calmly knocked through the decisive kick.

No time remained as the scoreboard read in Michigan’s favor, 20-17.

For a half, Iowa was the better team. Bass’ 1-yard run in the first quarter accounted for the only touchdown of the first half as the Hawkeyes took a 10-3 lead to the locker room.

In the third quarter, Michigan’s Gerald White hauled in a 25-yard touchdown pass from Jim Harbaugh before scoring on a 10-yard run to give the Wolverines their first lead. Trailing 17-10 after three quarters, Iowa took advantage of Dwight Sistrunk’s interception of Harbaugh. On the ensuing drive, a scrambling Vlasic delivered a 10-yard scoring strike to Robert Smith to knot the contest at 17.

For Iowa, the loss would begin a rough stretch of three losses in four games. The Hawkeyes were able to close the year on a 3-game winning streak, which included a thrilling 39-38 victory over San Diego State in the Holiday Bowl, to finish 9-3 and No. 16 in the final AP Poll.

For Michigan, the victory would ultimately propel it to its first Rose Bowl in four years. The Wolverines would start 9-0 before falling to Minnesota — ironically by a 20-17 score and on a last-second field goal. Still, Bo Schembechler’s team was able to beat Ohio State in the regular season finale — a de facto Big Ten Championship — to earn the trip to Pasadena.

The Wolverines were defeated by Arizona State in the Rose Bowl 22-15, but still finished eighth in the final polls. Neither a trip to Pasadena nor a top-10 finish would have came to fruition without Gillette’s clutch kick that came on this day 35 years ago.