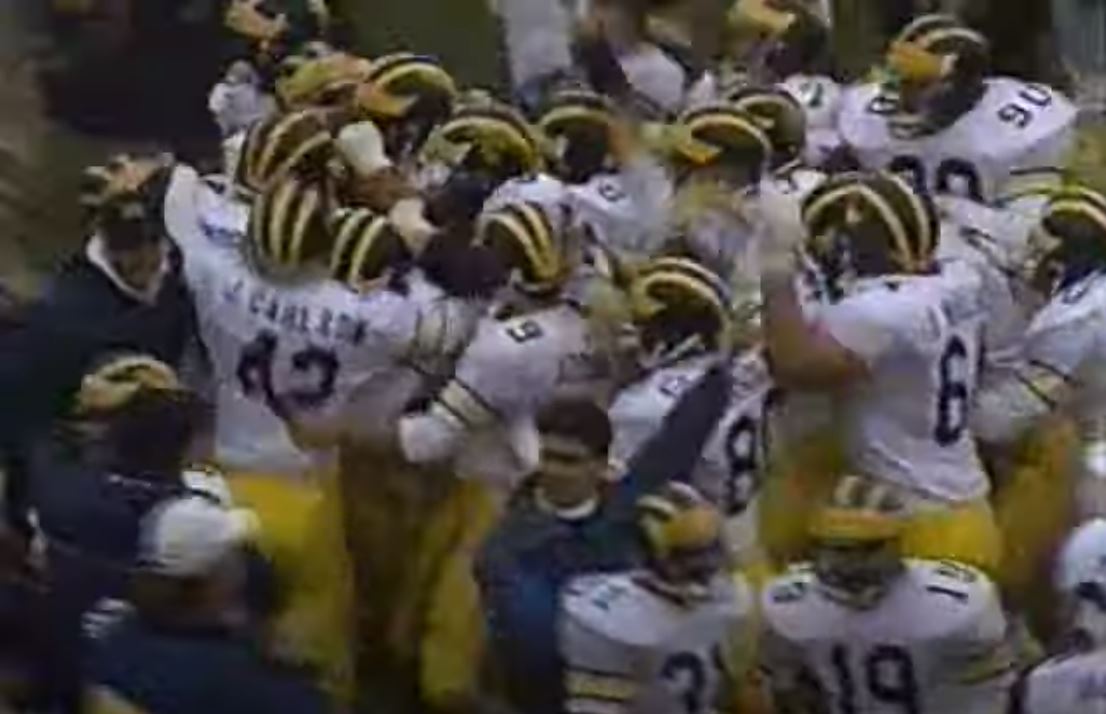 It’s not the case this year, but in late November, there’s typically one rivalry that comes to the minds of college football fans. That’s Ohio State and Michigan.

On this day 30 years ago, the match-up lived up to the hype. With a Rose Bowl berth on the line, a late gamble would prove costly for Ohio State. Michigan kicked a late field goal to win, 16-13.

Michigan was looking for its third straight win over Ohio State as it arrived at Ohio Stadium on Nov. 24, 1990. Under first-year head coach Gary Moeller, the Wolverines had overcome a 3-3 start by reeling off four straight victories and ascending to No. 15 in the polls.

Under third-year head coach John Cooper, Ohio State had also overcome a sluggish start. The Buckeyes had won five straight after a 2-2-1 start and were ranked No. 19 in the country.

Both teams were alive for a Big Ten title, but each needed help. Ohio State was in the Rose Bowl with a win and an Iowa loss. Michigan could only hope for a share of the conference crown.

Neither team had scored in the final quarter as Cooper faced a critical decision with less than two minutes remaining. With the contest knotted 13-13, a tie would have likely ended the Buckeyes’ Rose Bowl hopes. Facing 4th-and-1 at his own 29-yard-line, Cooper kept his offense on the field.

The Buckeyes decided to put the game in the hands of quarterback Greg Frey on an option play. The Michigan defense took away the pitch before corralling Frey. He was stood up short of the first down and the Wolverines took over.

Michigan was able to move inside the Ohio State 20-yard-line. With just seconds remaining, kicker J.D. Carlson was sent onto the field.

Carlson was 2-for-3 on the day, but had missed earlier in the quarter to put Michigan in front. His 37-yard attempt however, left no doubt.

His kick split the posts. For the third straight time against the Buckeyes, Michigan emerged victorious.

A field goal by Ohio State’s Tim Williams accounted for all the points in the first quarter. After Carlson answered with two for the Wolverines, the Buckeyes scored the game’s first touchdown with less than a minute to play in the first half as Frey found Jeff Graham on a 12-yard scoring strike.

Ohio State led 10-6 at the break and extended that to seven early in the third quarter. Michigan tied the game at 13 midway through the period when Elvis Grbac connected with Desmond Howard for a 12-yard touchdown.

Howard led all receivers with 73 yards. Michigan’s Ricky Powers led all rushers with 128 yards in the victory.

The loss would cost Ohio State a Big Ten title as Iowa would go on to lose to Minnesota. Michigan would finish in a 4-way tie atop the Big Ten with Iowa, Illinois and Michigan State.

Michigan would cap the year with a 35-3 rout of Ole Miss in the Gator Bowl to finish No. 7 in the final AP Poll. Ohio State fell to Air Force in the Liberty Bowl 23-11 to finish unranked.

During Cooper’s tenure in Columbus, his failure to beat Michigan would be his undoing. Against the Wolverines, Cooper went just 2-10-1. Perhaps the most heartbreaking of those losses came on this day three decades ago.