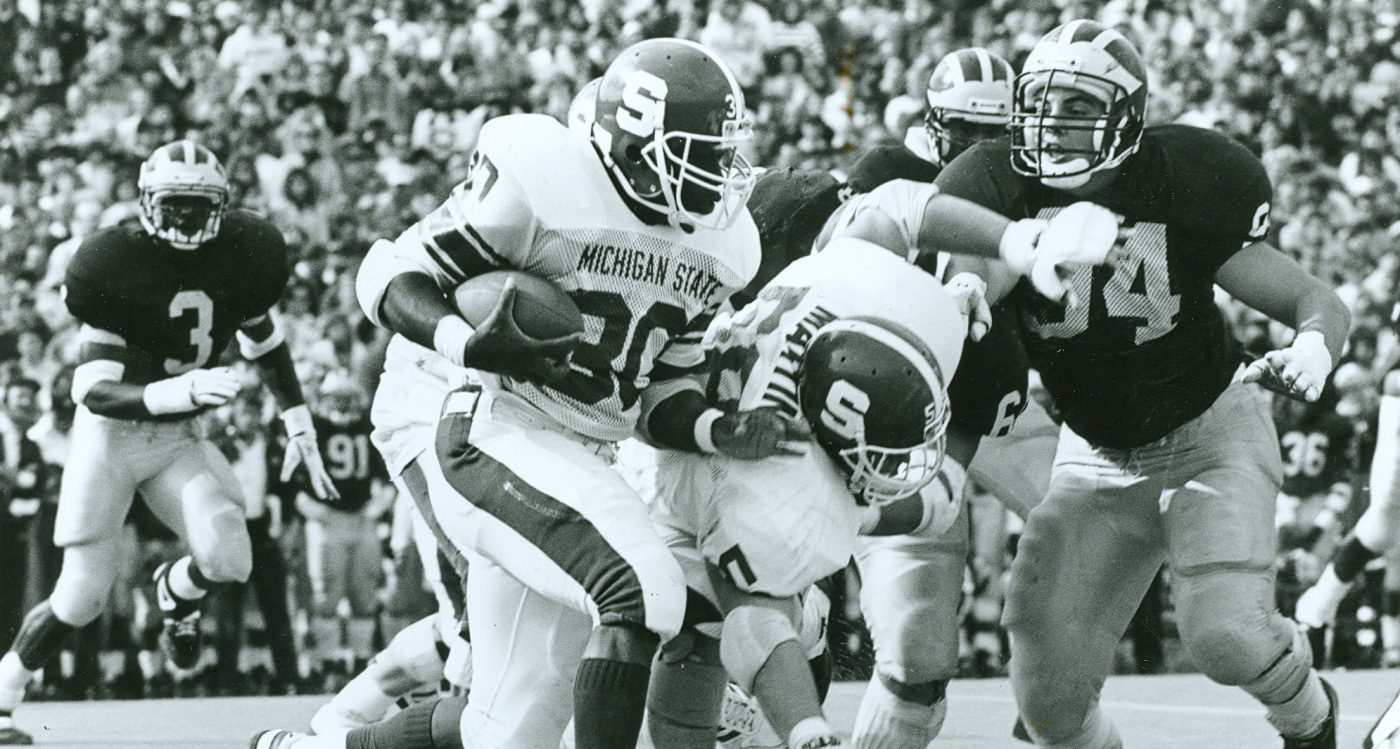 Fantastic finishes between in-state rivals Michigan and Michigan State have become commonplace over the years.

On this day 30 years ago, there was quite a bit of controversy associated with the finish. Michigan State stopped a 2-point conversion in the game’s final seconds to hold off Michigan in Ann Arbor, 28-27. Michigan fans will claim there should have been a flag.

After opening the season with a loss to Notre Dame, it took Michigan less than a month to work its way to No. 1 in the polls. The Wolverines had won three straight games as they hosted Michigan State on Oct. 13, 1990.

The Spartans were just 1-2-1 as they aimed for their first Big Ten win. After losing their previous two contests against Michigan, that victory would come.

With less than two minutes to play, Michigan State had just regained the lead on Tico Duckett’s 9-yard touchdown run. The run capped a 9-play, 70-yard drive and gave the Spartans a 28-21 lead. All the pressure was on Michigan.

The pressure however, was not too much for Michigan quarterback Elvis Grbac. After converting a 4th-and-6 with an 11-yard completion to Desmond Howard on the Wolverines’ first set of downs, Grbac completed five of his next eight throws.

Following a 21-yard completion to Howard, Grbac found Derrick Alexander on a fade route for the 7-yard touchdown with six seconds remaining. Head coach Gary Moeller had a decision to make. He left his offense on the field.

On the 2-point conversion try, Grbac again looked for Howard. On the play, Howard appeared to be bumped and tripped by Michigan State’s Eddie Brown. The future Heisman Trophy winner, who finished with eight catches for 140 yards, was unable to come down with the football. The ball hit the ground, but a flag never did.

Michigan State appeared to have secured the victory, but the Wolverines recovered the ensuing onside kick. On the game’s final play however, Brown intercepted Grbac’s Hail Mary to seal the win.

Throughout the contest, neither team led by more than seven. Grbac’s first touchdown pass to Alexander in the first quarter was followed by an 8-yard run by Michigan State quarterback Dan Enos.

In the third quarter, Jarrod Bunch scored from one yard out to put the Wolverines in front, 14-7. Later in the quarter, Enos found running back Hyland Hickson for the 4-yard tying touchdown.

The controversial loss would ultimately cost Michigan a third straight trip to the Rose Bowl. Michigan and Michigan State finished in a 4-way tie atop the Big Ten at 6-2 in conference.

Sharing the title with the Spartans and Wolverines were Iowa and Illinois. Iowa would ultimately get the Rose Bowl berth, but would lose to Washington.

Michigan finished No. 7 in the final AP Poll — the highest among Big Ten schools — but the Spartans had in-state bragging rights. It would be 18 years later before the Spartans would win again in Ann Arbor.

Moeller and Michigan would get an apology from the Big Ten, but Michigan State kept the victory. That win came on this day three decades ago.