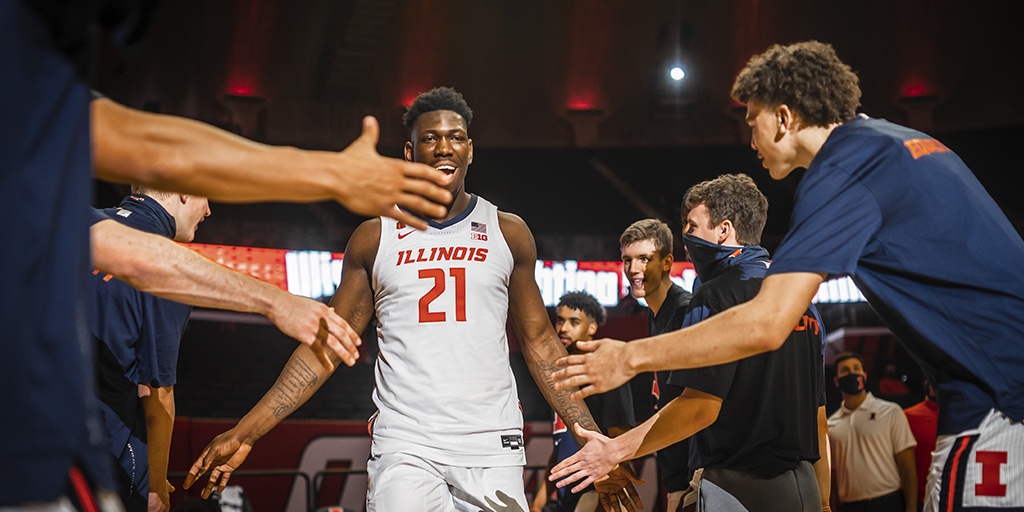 Illinois is ranked in the top 5 for the first time since reaching the national title game in 2005.

Head coach Brad Underwood and company started off the season 3-0 in the Illinois MTE that they hosted in Champaign. On Wednesday, Illinois routed North Carolina A&T by a score of 122-60. The Thanksgiving match-up saw Illinois blow past Chicago State, 97-38.

Friday’s game was the complete opposite of the first two. Illinois saw itself trailing for a good portion of the game. After two blowouts, Ohio gave Illinois quite a scare.

Ohio gave the Fighting Illini all they could before ultimately falling to the No. 8 team in the country, 77-75. Jason Preston single-handedly kept the Bobcats in the game. After putting up 31 points against Illinois, his story has been going around Twitter like crazy. Now after four days off, the Illini will take on No. 2 Baylor on Wednesday night.

Illinois has a lot to be happy about so far. Ayo Dosumnu is living up to his preseason All-American status. After three games, Dosumnu’s per game averages are 25.7 points, 7.7 rebounds, and 6.7 assists. With a lot of guys struggling against Ohio, Dosumnu continued his red hot start. If he can continue to do this every game, the Illini are absolutely a Final Four contender.

Adam Miller came to Illinois as a highly-touted four-star recruit. After his performance through his first three games, it’s apparent that Miller is living up to the hype. Miller set the Illini program record for points in a debut with 28. He shot 10-for-12 against the Aggies, finishing with six threes. That’s quite a performance for a true freshman.

Andre Curbelo also showed why he was a four-star recruit, scoring 18 points off the bench against Chicago State. He needs to be better handling the ball after having 10 turnovers in the first three games, but he’s shown flashes of why he was such a highly-touted recruit last year.

Da’Monte Williams has been a pleasant surprise on the offensive side of the floor. He’s always been lockdown on defense, but he’s shown he’s more than capable of making the three this year.

Trent Frazier has shown he’s fit into his new role of a pass-first point guard while still being able to score when he needs to. Giorgi Bezhanishvili has shown a little improvement after a huge down year last year. It doesn’t appear he will ever get back to his freshman form, but he seems to be fitting into his new role a lot better this year.

Illinois has so far met its preseason expectations. The Illini haven’t had the greatest schedule, but they’ve done exactly what they should — maybe minus the Ohio game. After seeing some ranked teams lose and others with close calls, the close game against the Bobcats doesn’t look as bad. It should also be mentioned that in past years, that’s a game that Illinois would lose.

A Look at Baylor

After their season opener against Arizona State was canceled, the Bears finally got their season underway. In their opening game, they beat Louisiana-Lafayette by a score of 112-82. In their second game, against a little better competition, they beat Washington, 86-52. After finishing 26-4 last year, Baylor seems to have picked up where it left off.

The Bears are led by junior guard Jared Butler. Butler is averaging 18.5 points per game so far this season. Butler is great in the pick and roll.

He can shoot off the screen very well. He’s also more than capable to make a skip pass to the corner if someone is left open. After Ohio had success against Illinois in the pick and roll, it should be expected to see a lot of that out of Baylor on Wednesday night.

This is a huge game for both programs. Whoever wins will have a top-5 win on its resume.

On paper, Cockburn should dominate the inside. The Bears don’t have a ton of size up front. So far this season, Flo Thamba has been starting at center for the Bears.

Thamba only averaged about 10 minutes per game last year and is fairly new to this much playing time. Illinois is going to have to win on the glass if it is going to have a shot in this game. With Baylor not having as much size, the Illini should excel on the boards.

This should be a close game throughout. Both teams are great at what they do.

However, with Illinois’ size, it should be able to out-rebound the Bears. If Cockburn is on, the Fighting Illini should dominate inside as well. Illinois will look to get him plenty of touches down low.

Illinois has shot well from distance this year, which is good news for this match-up. Establishing Cockburn should open up the perimeter for Illinois.

It will also benefit the Illini if they can play their run and gun game. This starts with rebounding once again. Once they get the rebound, they need to get it out and push it up the floor.

That’s what the Illini did so well in their first two games. The first two opponents were overmatched, but Illinois needs to continue that trend.

Expect Illinois to prevail in a tight one as size will be the difference. This game will air Wednesday night at 9 p.m. CT in Indianapolis and will air on ESPN.