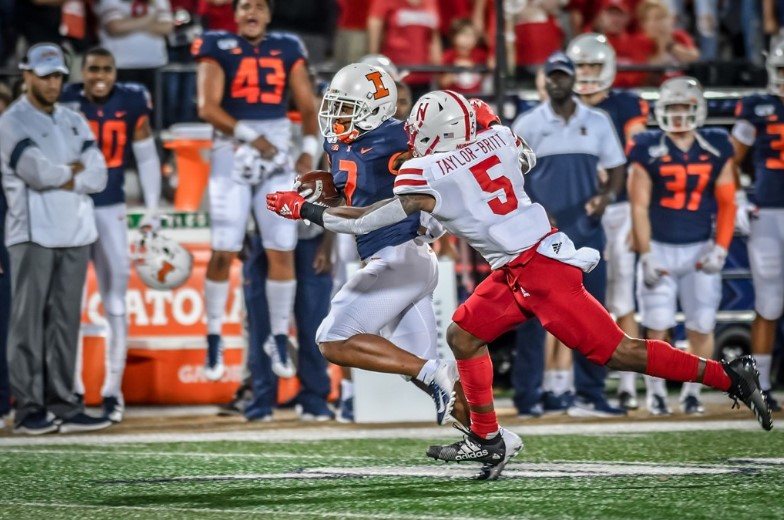 Illinois football is looking to win back-to-back games this Saturday against Nebraska.

After three straight losses to start the season, the Fighting Illini finally got on track against Rutgers last weekend. Illinois traveled to Piscataway and eked out a 23-20 win.

This was the best all-around performance so far this season. After getting torched by the Rutgers offense on the first drive, the defense finally figured it out for the first time this year. The defense gave up 422 total yards, but forced three turnovers.

Nebraska has been disappointing so far once again this season. After starting the season with a blowout loss to Ohio State, its game against Wisconsin was canceled. Following a loss to Northwestern, the Cornhuskers got their first win of the season last Saturday against Penn State — a huge disappointment thus far in 2020.

Nebraska ultimately won the match-up, 30-23. On paper, Illinois and Nebraska should be a good match-up of one-win teams.

Nebraska leads the all-time series against Illinois 13-3, with the Cornhuskers winning the last four. Illinois’ last win against Nebraska came in 2015, when it won a 14-13 in a nail-biter. Geronimo Allison caught a one-yard touchdown pass from Wes Lunt with 10 seconds remaining for the win.

Last year’s match-up in Champaign was a thriller. Illinois got out to a 14-0 lead just seven minutes into the game thanks to a 66-yard touchdown run by Reggie Corbin and a 26-yard touchdown catch by Josh Imatorbhebhe. After trading touchdowns for a few drives, the Illini went into the half leading 21-14.

Just 10 minutes into the third quarter, the Illini extended their lead to 35-21. From then on, it was all Huskers the rest of the night. Nebraska won the shootout, 42-38.

Nebraska totaled 674 yards of offense in this game, which was a terrible showing by the Illinois defense. Ironically, the defense is who kept the Illini in the game by forcing four turnovers. These turnovers set the Illini up nicely every time and they took full advantage of that, scoring touchdowns after three of those four turnovers.

Adrian Martinez, the former four-star who was supposed to be the next great Nebraska quarterback, was benched last week for Luke McCaffrey. Luke, the little brother of Christian McCaffrey, was a four-star himself. He got his first start last week against Penn State.

McCaffrey finished with 152 yards passing and a touchdown, while adding another touchdown and 67 yards on the ground. Assuming McCaffrey starts against the Illini, the defense should do all they can do to disrupt and confuse the redshirt freshman quarterback. The defensive line will need to step up and put all the pressure it can on McCaffrey.

Illinois should do all it can to get its run game going. The running game is Illinois’ strength this season. Nebraska has seemed to have some trouble stopping the run to this point. So far, the Conrhuskers have given up 245 yards rushing to Penn State, 148 to Northwestern, and 276 to Ohio State.

After running for 338 yards last week against Rutgers, Illinois needs to find a way to keep that going if it wants to win this game. Even if Brandon Peters gets the start at quarterback, redshirt freshman Isaiah Williams needs to be on the field for a good amount of snaps.

Both teams would like to keep their winning ways going. This should end in a very close game. Both defenses are giving up well over 400 yards per game, so expect this to be a shootout.

Illinois should have the slight advantage on defense. Although the Illini defense has looked atrocious the majority of the year, they are starting to force turnovers. Just look at last year: Illinois gave up nearly 700 yards of total offense, but forced four turnovers. It was in this game until the end and probably should have won.

While this should be a close game, road games aren’t easy — even in a pandemic. The defense has shown that it can’t stop anyone. Illinois seemed to show some improvement last week against Rutgers, albeit, not much.

It’s easy to see both defenses struggling throughout the game with Nebraska coming out on top. Nebraska will come come out hot with a pretty good lead before Illinois comes back and makes it a game. Nebraska pulls out a close one in the end.