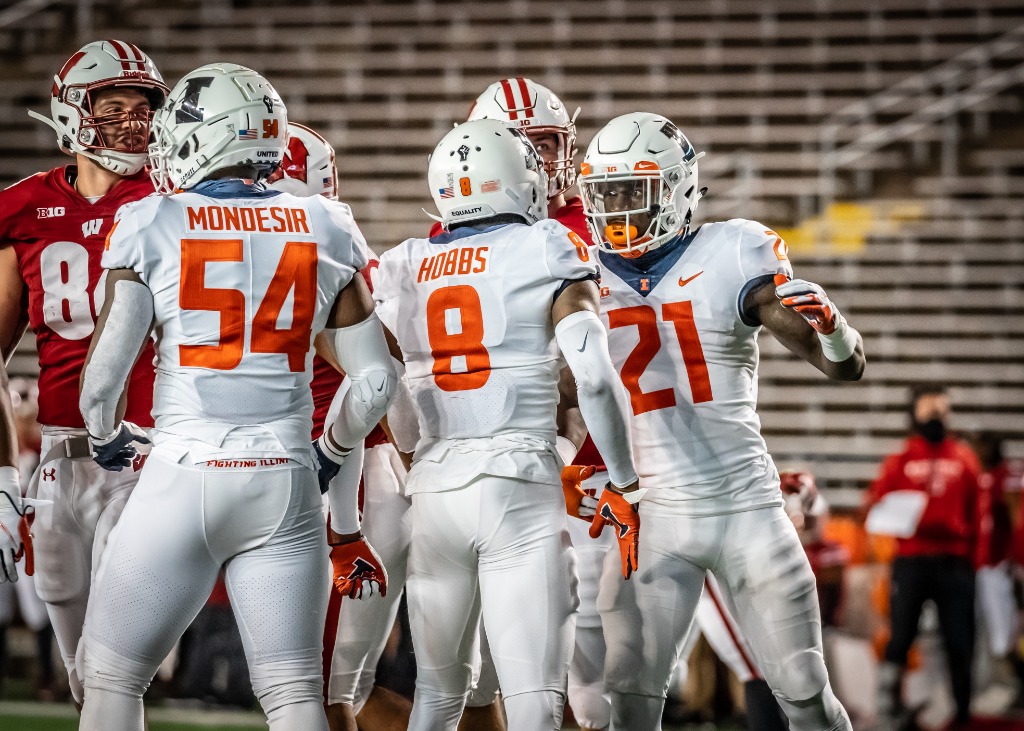 Illinois got blasted by Wisconsin last week and looks to rebound against Purdue on Saturday. Purdue beat Iowa last week in a hard-fought 24-20 contest.

These two teams meet in Champaign on Saturday trending in different directions. Rondale Moore’s availability seems in the clouds as of now for the Boilermakers.

That doesn’t matter for Purdue as it still has David Bell. Bell finished last week with 13 receptions for 121 yards and three touchdowns. Aidan O’Connell, Purdue’s walk-on redshirt junior quarterback, was trusted to throw the ball 50 times against a usual stingy Iowa defense.

He completed 31 of those 50 passes for 282 yards and three touchdowns. With Illinois’ knack to create turnovers, it should be mentioned that he did throw two interceptions as well.

The contest begins at 12 p.m. ET and airs on Big Ten Network.

This should be a good measuring stick game for the Fighting Illini. Illinois and Purdue have been pretty even on the field, historically speaking.

Illinois won the match-up against Purdue last year 24-6 in West Lafayette. This game was played in a rainstorm with a muddy, soggy field. That worked to Illinois’ advantage with its top 15 nationally-ranked offensive line and three-headed rushing monster of Dre Brown, Ra’Von Bonner, and Reggie Corbin.

Brown and Corbin graduated. Bonner decided to opt out this season.

Unfortunately, it looks like it’s going to be sunny and in the high-50s in Champaign on Saturday afternoon. This works to Purdue’s advantage with the way that it throws the ball.

Although nothing went right for Illinois last week, one shouldn’t feel awful about the Illini’s chances this weekend. If Moore ultimately is out, Illinois should like the match-up of cornerback Nate Hobbs on Bell.

Hobbs was exposed pretty badly last week against Wisconsin, which is unusual for the future pro. This should serve as extra motivation this week. Even if Moore plays, then Hobbs will match up on him, while Marquez Beason will draw the assignment of covering Bell.

Beason, Illinois’ highest rated recruit since 2009, had an underwhelming first game after missing all of last season. Just like Hobbs, Beason will have something to prove on Saturday.

Illinois’ offense has to do better than last week. Expect there to be a night-and-day difference in the offense from last week. This isn’t a knock against Purdue’s defense, but there is a big difference between Purdue and Wisconsin defensively.

After getting blasted 45-7 in Madison, the Illinois offense will score. Wide receiver Josh Imatorbhebhe will get going after a slow start, as will running back Mike Epstein.

Illinois will also finally utilize one of the best tight end rooms in the Big Ten with Daniel Barker, Luke Ford, and Daniel Imatorbhebhe.

Will that be enough though? Bell will come out hot against the Illini, while Illinois finds a way to slow him down in the second half. While this is going to be a close game, it won’t end with the Illini coming out on top.