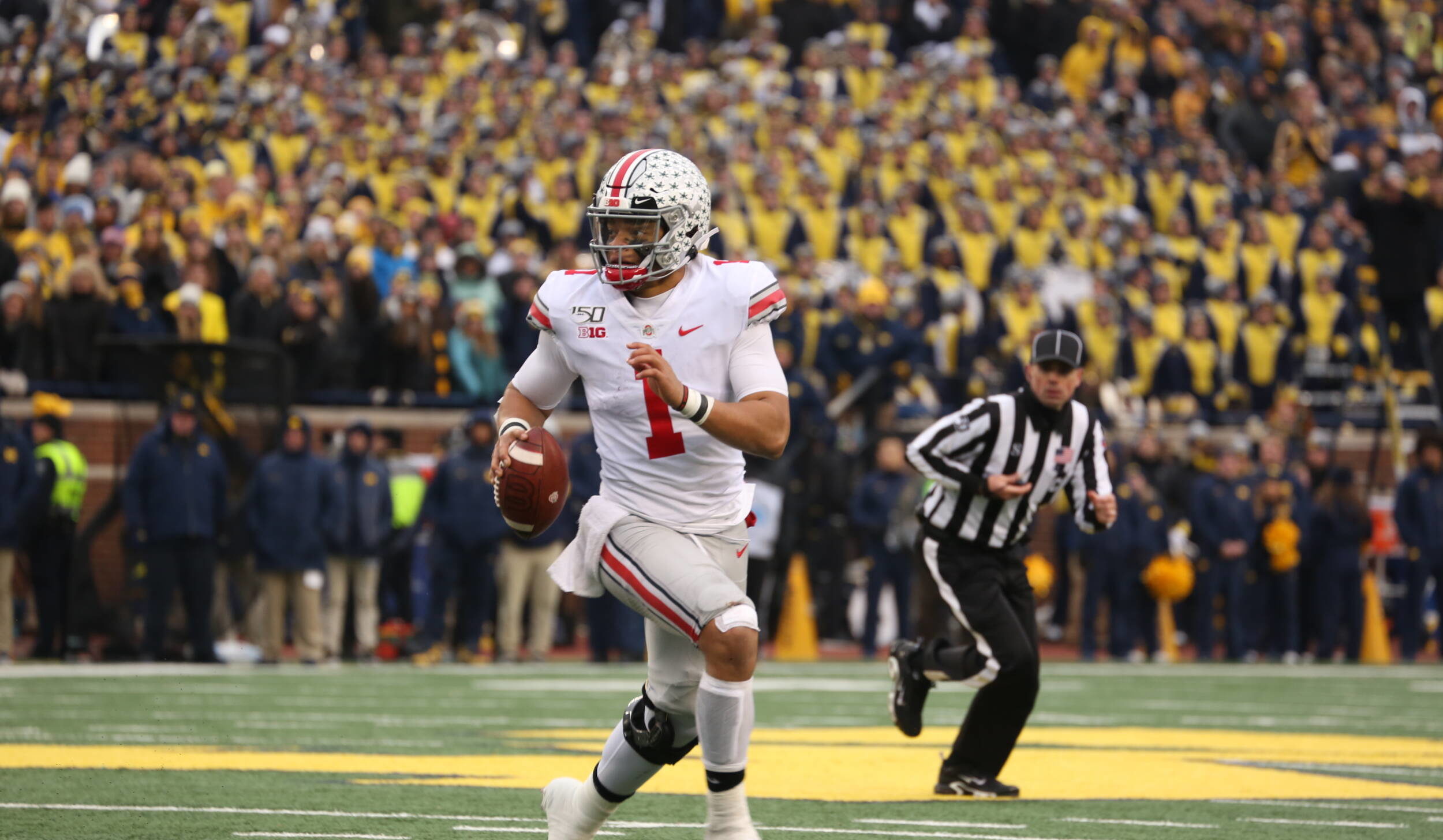 The Greg Schiano era is finally back underway in northern New Jersey. While it may be a rebuilding year for the Scarlet Knights, there is something to be excited about up at Rutgers. Schiano has been recruiting the New Jersey Turnpike pretty well, and has some sort of momentum in his return to Rutgers. That won’t help him this year however, as Rutgers most likely will have another year in the cellar of the Big Ten East.

If there is a bright spot though, Schiano did add 11 transfers, while also adding 17 freshmen — half of which enrolled early. Due to Schiano’s positive momentum, and the fact that the Scarlet Knights return both stud linebackers Tyreek Maddox-Williams and Tyshon Fox as well as both receivers, Bo Melton and Isaiah Washington, we got Rutgers picking off Illinois at home this season as its lone win.

Tagovailoa is taking over for Virginia Tech transfer Josh Jackson, who opted out of the season after Tagovailoa was deemed immediately eligible by the NCAA. The Terps have always been able to put up points, and this year should be no exception.

With the addition of Tagovailoa, and with guys like running back Tayon Fleet-Davis, and wide receiver Dontay Demus Jr. returning, the offense for Maryland should be in pretty good shape. On top of that, the Terps also have former Duke offensive coordinator and East Carolina head coach Scottie Montgomery calling plays in College Park.

Defense could be a problem, as the Terps lose the majority of their production, and don’t return a single defensive lineman who recorded more than two sacks.

Maryland will pick up wins against bottom feeders Rutgers and Northwestern. But beyond that, the Terps will be in for another rebuilding year under Locksley.

Mel Tucker is in the house. The former Colorado head man takes over for longtime Spartan head coach Mark Dantonio. He walks into East Lansing for what could be a transition year for Michigan State.

Offensively, the Spartans are going to struggle. With very few playmakers on offense, Michigan State is going to have a difficult time putting points on the board. Redshirt junior quarterback Rocky Lombardi is expected to start this Saturday against Rutgers, but Tucker has gone back and forth between three separate quarterbacks throughout camp. Luckily for the Spartans, Rutgers can be a break-in type of game for Lombardi and the offense.

In what should be a transition year for Tucker’s Spartans, there likely will be some growing pains, especially on the offensive end. That being said, they’ll find a way to pick up three wins. We have them beating Northwestern, Maryland, and Rutgers.

The Indiana Hoosiers are quietly turning their program around under Tom Allen. Known as a basketball school, Indiana finished the regular season 8-4 last year, just missing a spot in the polls, before dropping a gut-wrenching loss to Tennessee in the TaxSlayer Gator Bowl. The Hoosiers shouldn’t miss a beat this year, and while a short season may lessen their record, Indiana is still a very solid football team.

Quarterback Michael Penix Jr. is a stud, and will have a lot to follow up on this year in only his redshirt sophomore campaign. Penix Jr. will have big targets Whop Philyor and tight end Peyton Hendershot to work with this upcoming season.

Linebacker Micah McFadden will help run Allen’s defense. McFadden led the team with 60 tackles last year on defense, as the Tampa native is seen by many as a team leader for this Hoosiers’ team.

Indiana can certainly make some noise in this weird 2020 season. But with the way the schedule lines up, we see it losing a close one Saturday against Penn State. Indiana will pick up wins over Rutgers, Michigan State, Maryland, and Purdue.

Sixth-Year head coach Jim Harbaugh has yet to have his signature big season at Michigan. As his leash gets shorter and shorter, we don’t think it’s happening this year.

Quarterback Joe Milton has been talked about as just being OK under center for the Wolverines, so expectations are filled with a lot of question marks there. Michigan does return Ronnie Bell and Giles Jackson, who should account for lots of points for Harbaugh’s offense.

Defensively, there’s question marks as well. Michigan does return linebacker Cameron McGrone and defensive end Aidan Hutchinson, but there’s still loads of questions up front for the Wolverines, and those likely won’t be answered until after the first snap against Minnesota.

It may not be what Michigan fans wanted to hear, but we expect another year of mediocrity for the Michigan Wolverines. They’ll lose in Minneapolis and again to Ohio State, but will pick up wins over rival Michigan State, Indiana, Maryland, and Rutgers, to round the year out at 4-4.

We have reached the “elite” stage of the Big Ten East. The Penn State Nittany Lions are ready to finally get over the hump, determined to win the East. They’re led by seventh-year head coach James Franklin, who has done a solid job in Happy Valley since coming over from Vanderbilt.

Penn State should have another solid ball club, especially with guys returning like quarterback Sean Clifford and tight end Pat Freiermurth on the offense. Star cornerback Shaka Toney also returns on the defensive side of the ball, and serves as the glue to an all-around solid defensive bunch.

The Nittany Lions are easily a top-10 team, and a team Ohio State certainly needs to look out for in the race for the East division crown.

They’ll get tested at Indiana, Nebraska, and Michigan, but will leave those three with a win. The national showdown will be when Penn State hosts Ohio State on Halloween night, where the Buckeyes will edge out the Nittany Lions in a close one. That contest will ultimately decide the division title.

We may have just spoiled Ohio State’s fate for you. Yes, that’s right. We picked the Big Ten East exactly how it finished last year. This shouldn’t come as a surprise though. The Ohio State Buckeyes may be the second-best team in the country and are led by Heisman hopeful quarterback Justin Fields.

Ryan Day’s second year as head coach may be a special one in Columbus. The Buckeyes will come out of the gates firing on Saturday, and will roll past Nebraska before winning a close one in Happy Valley. Rutgers, Maryland, and Illinois won’t be a bother, while games against Indiana, Michigan State, and Michigan may be close for a while before Ohio State pulls an Ohio State, winning those games by larger margins.

Ohio State is the clear-cut favorite to win the Big Ten, and may be right there to compete for a national title. Time will tell, but the Buckeyes are locked and loaded for a stellar 2020 campaign.