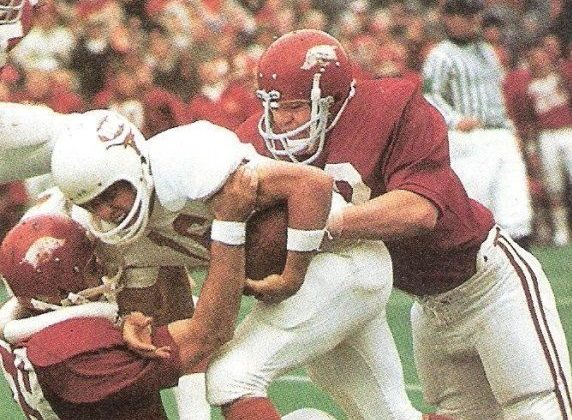 It won’t be long before Texas and Arkansas are conference foes once again. As former members of the Southwest Conference, the teams played some memorable contests.

That included one that took place on this day 45 years ago. Ham Jones’ late touchdown run ultimately propelled the Longhorns to victory in a top-10 matchup that would decide the conference crown, 13-9.

Texas was 4-0 and ranked No. 2 in the country as it arrived at Razorback Stadium on Oct. 15, 1977. The Longhorns had already shut out two opponents and had allowed just 21 total points for the season. They were coming off a 13-6 win over Oklahoma in a top-5 showdown.

After beginning the season unranked, Arkansas had ascended to No. 8 in the polls following a 4-0 start. The Razorbacks had defeated their four opponents by a combined score of 160-25.

Both teams were led by first-year head coaches in Lou Holtz for Arkansas and Fred Akers for Texas. The Longhorns were eyeing their sixth straight win in the series.

Through the first three quarters, the teams combined for just five field goals. The first two — of 58 and 52 yards — came courtesy of Texas’ Russell Exrleben. Arkansas’ Steve Little answered with makes of 33 yards, an NCAA-record tying 67 yards and 25 yards.

A 20-mile-per-hour wind played a role in the long makes, but with the Razorbacks leading 9-6 late, Texas was facing that wind as it began a critical drive at its own 20-yard-line. The Longhorns rushed five times as often as they passed that day in Fayetteville, but in crunch time, quarterback Randy McEachern came up clutch.

After a completion to Jones for 14 yards on third down kept the Texas drive alive, McEachern found Alfred Jackson for 31 yards and standout running back Earl Campbell for 28 yards. Prior to those three completions, McEachern had completed just one pass for 17 yards.

The passes moved Texas to the Arkansas goal line. With 4:31 remaining, Jones scored from a yard out to put Texas in front for good, 13-9.

Although scoring was at a minimum, the teams played largely turnover-free. Texas finished with 334 yards to 256 for Arkansas. Campbell, the eventual Heisman Trophy winner, powered the Longhorns with 189 yards rushing in the win.

Texas would go a perfect 11-0 during the regular season before falling to Notre Dame in the Cotton Bowl, 38-10. The Longhorns finished fourth in the final AP Poll.

For Arkansas, the loss to Texas would be its lone blemish during an 11-1 season that culminated in an Orange Bowl rout of Oklahoma. The Razorbacks finished third in the final polls.

Despite both teams finishing 11-1, neither won a national title in 1977. The Southwest Conference title was decided by Jones’ late touchdown run and on this day 45 years ago.