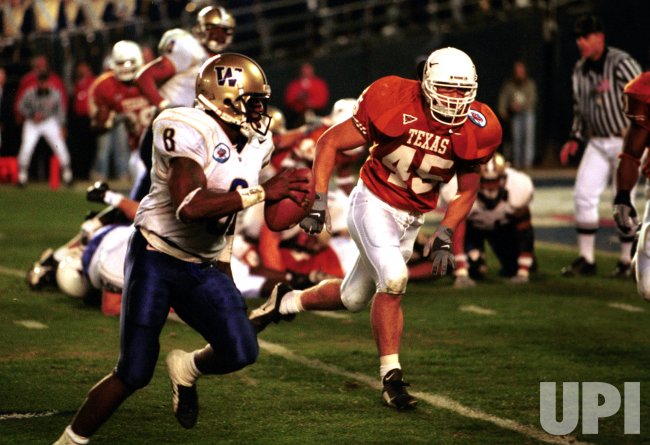 It seems as though incredible comebacks and remarkable finishes have become a staple of the Holiday Bowl through the years. On Tuesday night, fans will hope that continues to be the case as UCLA faces NC State.

On this day 20 years ago, that certainly was the case. Texas scored four touchdowns over the final 12 minutes to erase what was once a 19-point deficit in an improbable 47-43 comeback victory over Washington.

A loss to Colorado in the Big 12 Championship had killed Texas’ national title hopes, but the Longhorns were looking to tie a school record for wins in a season as they arrived at Qualcomm Stadium on Dec. 28, 2001. Texas was 10-2 and ranked No. 9 in the country.

After winning the Pac-10 in 2000, Washington had taken a step back in 2001. The Huskies started 7-1 and ascended into the top 10, but were 8-3 as they arrived in San Diego. Washington was trying to avoid a third loss in four games to close the season.

Washington seemed in control with less than four minutes remaining in the third quarter. Willie Hurst’s 4-yard touchdown run had given the Huskies a 36-17 lead and all seemed right.

The Longhorns were able to add a short field goal to cut the lead to 16 after three quarters. In the final period however, Texas erupted with four touchdowns over the final 12 minutes.

After a 3-and-out by Washington, it took Texas less than three minutes to go 48 yards. Quarterback Major Applewhite’s 2-yard toss to Matt Trissel cut the lead 36-26, but a failed 2-point conversion kept it a 2-score game.

Another 3-and-out led to another short field for Texas. Ivan Williams’ 1-yard touchdown capped a 54-yard drive. With eight minutes to play, what had been a 19-point deficit just four minutes earlier became three, 36-33.

With momentum on Texas’ side, things went from bad to worse for the Huskies. On the third play of the ensuing drive, Washington quarterback Cody Pickett was intercepted by linebacker Derrick Johnson. Johnson returned the pick 16 yards to the Washington 9-yard-line. Three plays later, Applewhite hit tight end Bo Scaife for a 4-yard touchdown to give Texas its first lead since the second quarter.

Washington trailed 40-36, but after an exchange of punts, it found a way to mount a clutch drive. The Huskies took over at their own 20-yard-line with 3:27 remaining. On the drive, Pickett completed passes to five different receivers. Facing 2nd-and-1 from the Texas 34 however, it was the ground game that put Washington back in front.

Hurst’s 34-yard scamper gave Washington a 43-40 lead. One minute and 49 seconds however, proved to be too much time for Applewhite and the Longhorns.

On the game’s decisive drive, Applewhite misfired on his first two throws, but completed the next three. That included strikes of 32 and 25 yards to B.J. Johnson. With the ball on the Washington 5-yard-line, Williams did the rest. After carrying for two yards, his 3-yard touchdown run put the Longhorns ahead for good with 38 seconds left.

Washington’s final drive ended near midfield as Pickett was pushed out of bounds on fourth down. A kneel-down by Applewhite ended the game, his Texas career and a comeback for the ages.

The contest featured 90 points, but nobody scored during the first quarter. Washington drew first blood with a pair of field goals from John Anderson before Tank Johnson returned an Applewhite interception 38 yards for a touchdown to give the Huskies a 13-0 lead.

Applewhite was picked off three times in the second quarter, but threw a 43-yard touchdown to B.J. Johnson and a 25-yard scoring strike to Roy Williams. Washington answered with a 4-yard touchdown pass from Cody Pickett to Joe Collier to take a 20-14 lead. Anderson’s third field goal followed Applewhite’s third interception.

Applewhite broke his own school record with 473 yards passing and four touchdowns in the win. Williams (11 catches, 134 yards) and B.J. Johnson (six catches, 157 yards) had monster nights receiving for the Longhorns.

Pickett passed for 293 yards, two touchdowns and two interceptions in the loss. Stevens led the Huskies with 109 yards receiving on nine catches. Hurst paced all rushers with 137 yards.

Texas’ victory tied a program record as the Longhorns reached 11 wins. Texas finished 11-2 and ranked No. 5 — its first top-5 finish in 18 years. Under head coach Mack Brown, the Longhorns would finish in the top 10 six times during a 9-year stretch, beginning in 2001. A top-10 finish likely wouldn’t have come to fruition without the Holiday Bowl comeback that took place on this day two decades ago.