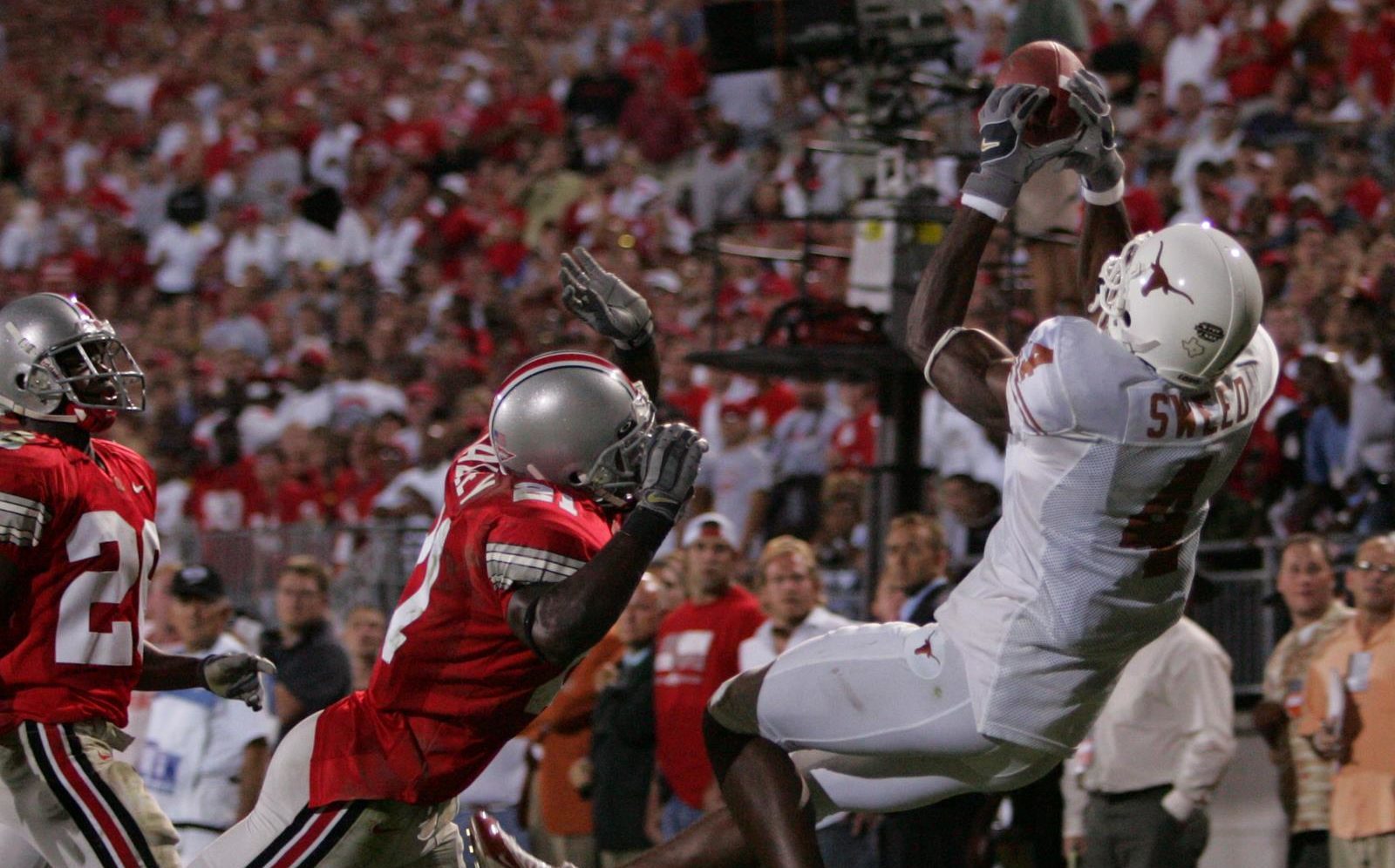 That of course would be Young’s winning touchdown in a victory over USC in the Rose Bowl for the 2005 national championship. That however, wasn’t Young’s first time orchestrating a game-winning drive against a top-5 team that season.

On this day 15 years ago, Young rallied Texas to a thrilling 25-22 victory over Ohio State in a match-up of top-5 teams.

Texas had began the year ranked No. 2 as it left Austin for the first time to face fourth-ranked Ohio State on Sept. 10, 2005. The Longhorns were coming off an 11-1 season and top-5 finish, capped with a Rose Bowl win over Michigan. Young headlined an offense that would go on to set an FBS scoring record. Texas opened the year with a 60-3 win over Louisiana-Lafayette.

Ohio State had finished a disappointing 8-4 in 2004, but big things were expected in 2005. Coached by Jim Tressel, Ohio State began the year ranked No. 6, but ascended to No. 4 after a 34-14 win over Miami University in the opener. The Buckeyes had a talented quarterback in their own right in Troy Smith, but were more known for their defense with names to include A.J. Hawk, Donte Whitner and Bobby Carpenter.

With just over five minutes to play and Ohio State nursing a 22-16 lead, kicker Josh Huston trotted onto the field to attempt a 50-yard field goal and try to make it a 2-score game. Huston’s kick sailed wide and Texas had new life.

After a pass interference call and a 4-yard run by Young moved the ball into Ohio State territory, the Longhorns faced a key 3rd-and-6. Young found freshman running back Jamaal Charles out of the backfield for a gain of nine to move inside the Buckeyes’ 40.

Two plays after an offsides penalty gave Texas another first down, Young went for the jugular. Wide receiver Limas Sweed was able to get behind a pair of Ohio State defenders before reaching up for the go-ahead touchdown with 2:37 to play.

Down 23-22, Ohio State began the ensuing drive at its own 30. On the first play, Texas’ Drew Kelson was able to get to Ohio State quarterback Justin Zwick. Zwick was stripped and the Longhorns took over in the red zone.

Texas stalled at the 1-yard-line with 19 seconds to go, but Aaron Harris sealed the victory by sacking Ohio State quarterback Troy Smith for a safety. The free kick was recovered by Texas as the Longhorns ran out the clock.

Texas started the contest strong, racing to a 10-0 lead after one. The Buckeyes responded with 16 straight points to open the second quarter before taking a 16-13 lead to the locker room.

Huston kicked a pair of third-quarter field goals for Ohio State sandwiched around the third make of the night for Texas kicker David Pino. After making five field goals, Huston’s lone miss of the night late in the contest would prove costly.

Ohio State was led by Antonio Pittman’s 75 yards rushing. Santonio Holmes finished with a team-high 73 yards receiving and caught the Buckeyes’ lone touchdown from Smith early in the second quarter. Hawk and safety Nate Salley each had interceptions for the Ohio State defense.

For Ohio State, it would fall at Penn State later in the season, but would cap the year with seven straight wins and a 34-20 victory over Notre Dame in the Fiesta Bowl. The Buckeyes finished the year ranked No. 4 in the final polls.

Texas would go on to beat USC 41-38 in the Rose Bowl to end the Trojans’ 3-peat bid, complete a perfect season and win its first national championship since 1970. That wouldn’t have been possible without the thrilling victory over No. 4 Ohio State that took place on this day two decades ago.