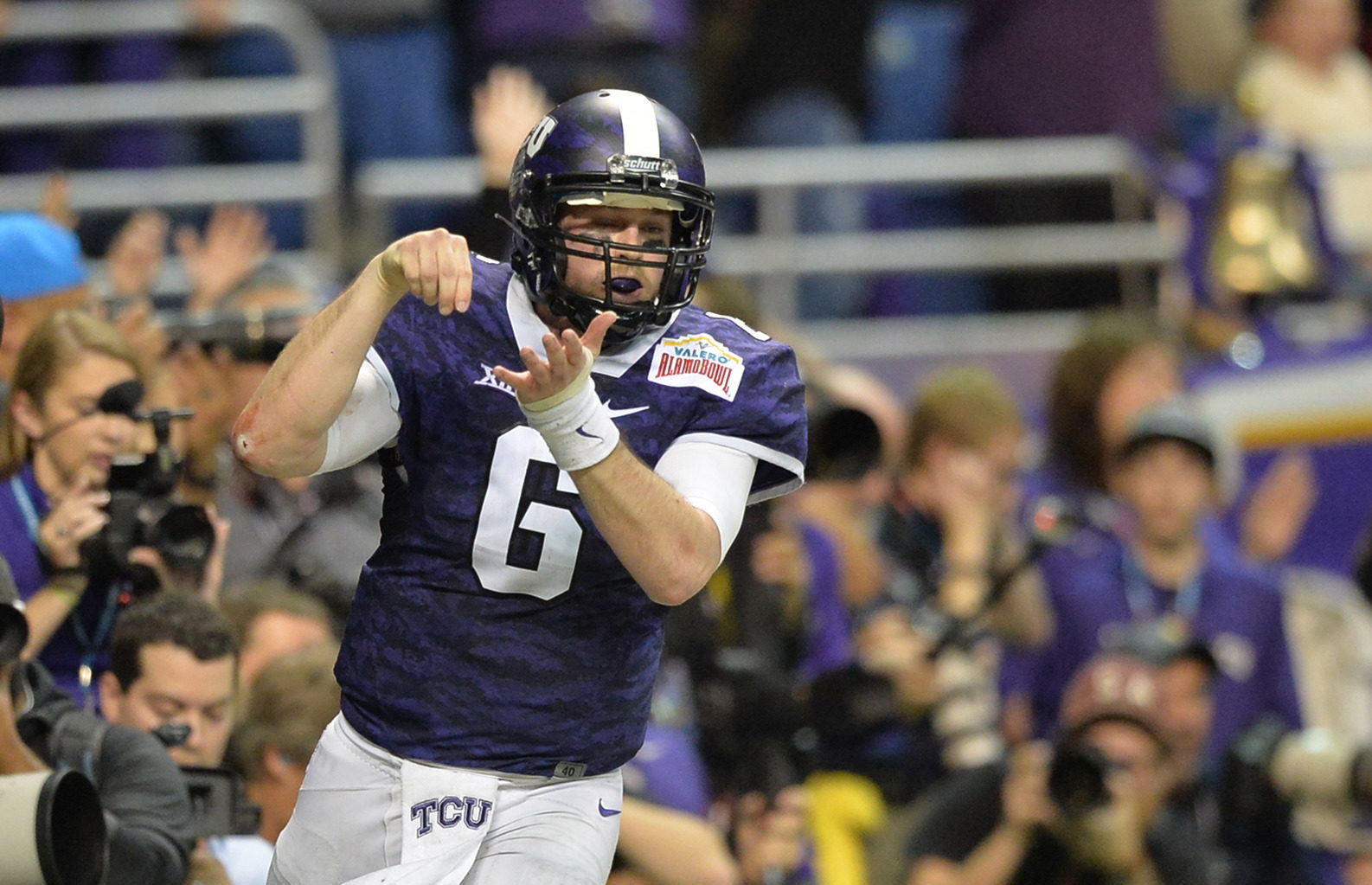 After each winning New Year’s Six bowls in 2014, Oregon and TCU took steps back in 2015. At the end of the season however, they gave college football fans a show.

It was a tale of two halves on this day five years ago, but in the end, TCU laughed last. The Horned Frogs overcame a 31-point halftime deficit before topping Oregon in triple-overtime in the Alamo Bowl, 47-41.

At 10-2, TCU was ranked No. 11 in the country. The Horned Frogs had been in the Big 12 hunt for most of the season, but a 30-29 loss at Oklahoma would cost them a shot at the conference crown. To make matters worse, TCU was without starting quarterback Trevone Boykin, who had been suspended following an arrest prior to the game.

Oregon was 9-3 and ranked No. 15 as it arrived at the Alamodome in San Antonio on Jan. 2, 2016. The Ducks had reached the National Championship the year prior where they lost to Ohio State. After a 3-3 start to 2015, Oregon arrived as winners of six straight. After a half, there was little doubt that it would run to seven.

At halftime, it was all Oregon. The Ducks led 31-0. Vernon Adams Jr.’s 37-yard touchdown pass to Darren Carrington got the scoring started before Royce Freeman added a pair of touchdown runs in the first quarter.

Tony Brooks-James increased the lead to 28-0 early in the second quarter before Aidan Schneider pushed the lead to 31 with a 47-yard field goal in the half’s final minute. Unfortunately for Oregon, it lost Adams late in the half and had to turn to Jeff Locke. With a 31-0 lead, that didn’t seem like it would be that large of an issue.

TCU finally got on the board more than four minutes into the second half when Jaden Oberkrom knocked through a 24-yard field goal. Down 31-3, few would have guessed that the Horned Frogs were just getting started. By the end of the third quarter, TCU was within two scores.

Bram Kohlhausen, who got the start in place of the suspended Boykin, found Jaelan Austin for a 26-yard score — TCU’s first touchdown of the night. After Oregon fumbled the ensuing kickoff, Kohlhausen scored in the final minute of the third quarter on a keeper to make it 31-17.

The first possession of the fourth quarter for the Horned Frogs went 76 yards and melted more than four minutes off the clock. Facing 4th-and-11 from the Oregon 17-yard-line midway through the final period, head coach Gary Patterson was content to settle for a 34-yard Oberkrom field goal.

The next TCU drive was another long march as the Horned Frogs went 91 yards in seven plays. Aaron Green’s 2-yard touchdown run, followed by a 2-point conversion cut the lead to 31-28 with just 3:32 to play.

After a stellar first half, Oregon managed just 17 total yards over the third and fourth quarters. A quick 3-and-out with back to back incomplete passes from Locke put TCU in position to force overtime or win the game in regulation.

TCU’s final drive of regulation started inside the Oregon 40-yard-line. After a pair of runs by Green for first downs, TCU reached the Ducks’ 5-yard-line. On 3rd-and-1 however, Kohlhausen misfired. With 19 seconds remaining, Oberkrom knocked home a 22-yard field goal to force overtime.

Momentum was clearly on the side of TCU as the contest went to overtime. The Horned Frogs had scored 31 straight points. It took just four plays to make it 38.

Kohlhausen’s 7-yard touchdown pass to Emanuel Porter gave TCU its first lead of the night, 38-31, but the Ducks answered. After a 17-yard completion from Locke to Freeman on fourth down kept Oregon alive, Freeman’s third touchdown of the night tied the game at 38.

In the second overtime, the teams combined for negative-5 yards. Schneider was able to make good on a 44-yard field goal to put Oregon back in front, 41-38. After two incomplete passes and a loss, the pressure shifted to Oberkrom.

The senior and Lou Groza Award semifinalist wasn’t ready for his career to end as he calmly tied the game with a 46-yard make. To a third overtime, they went.

It took just three plays for TCU to find the end zone. After a pair of Green runs, Kohlhausen’s 8-yard touchdown run — his fourth total touchdown of the night and second run — put the Horned Frogs back in front, 47-41. The 2-point conversion try however, was failed. That allowed Oregon a chance to win on its possession.

The Ducks could not take advantage.

Following an errant snap on 3rd-and-2, the game came down to a 4th-and-8 in triple overtime. Locke was flushed on the game’s final play before firing for Carrington near the goal line. Stepping in front was TCU safety Denzel Johnson, who knocked the pass away.

As for Oregon, the slide didn’t stop with the Alamo Bowl loss. The following year, the Ducks finished just 4-8 — their worst record in 25 years. Head coach Mark Helfrich was ultimately fired two years after reaching the College Football Playoff.

The victory gave TCU an 11-2 final record. For the second straight year, the Horned Frogs finished in the top 10, coming in at No. 7 in the final polls. It wouldn’t have been possible without the Alamo Bowl victory that tied the biggest comeback in bowl history on this day five years ago.