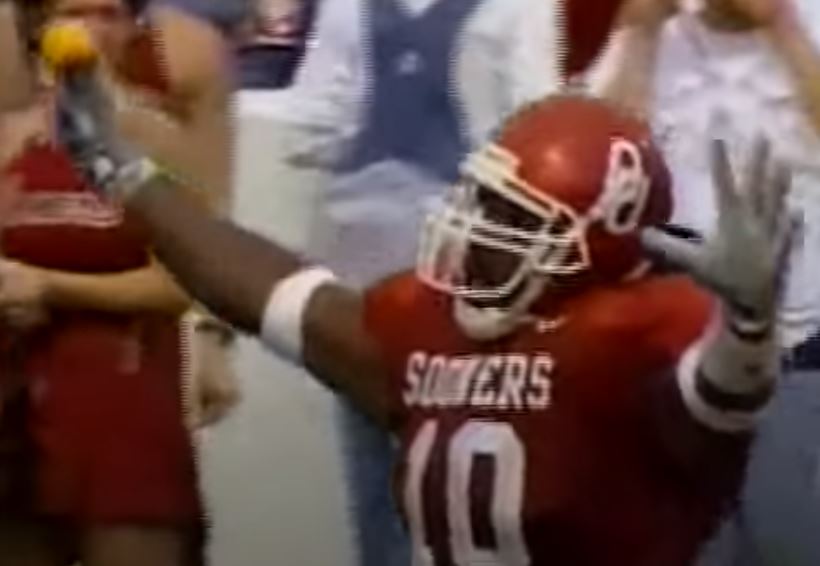 Over Bob Stoops’ 18 years as head coach at Oklahoma, big games were the norm.

One however, might make the case that it was on this day 20 years that the Sooners let the college football world know they were back. At home against No. 1 Nebraska, Oklahoma scored the game’s final 31 points for a statement 31-14 win.

Nebraska was 7-0 and ranked No. 1 as it arrived in Norman on Oct. 28, 2000. The Cornhuskers had survived a scare at Notre Dame early in the season, but had won each of their last five games by at least 18 points.

Under Stoops, a second-year head coach, Oklahoma was 6-0 and looking for a third straight win over a ranked opponent. After blasting No. 11 Texas 63-14, the Sooners were coming off a 41-31 win at No. 2 Kansas State. Oklahoma arrived ranked third in the country.

The first 15 minutes of the contest was dominated by Nebraska. The Cornhukers raced to a 14-0 lead and Oklahoma looked to be in trouble.

Nebraska was pinned deep on its next possession, but marched 91 yards. Crouch capped the drive with a 37-yard touchdown run.

Nebraska finished with 191 yards in the first quarter, but managed just 137 the rest of the way. The Cornhuskers never scored again.

From the second quarter on, Oklahoma dominated all three phases of the game. It took less than a minute into the second period for Oklahoma to get on the board as Quentin Griffin scored from a yard out.

The next possession seemed to be where the Sooners seized control. After Andre Woolfolk hauled in a 34-yard pass from quarterback Josh Heupel that was kicked into the air to move Oklahoma into Nebraska territory, Heupel capped the drive by lofting a 34-yard scoring strike to Curtis Fagan on 3rd-and-14.

It was the special teams that would put Oklahoma ahead for good. After running back Josh Norman blocked the punt of Nebraska’s Dan Hadenfeldt, kicker Tim Duncan kicked a short field goal to give the Sooners a 17-14 lead. With less than three minutes to play in the first half, Norman capped a 24-point second quarter with an 8-yard touchdown.

Neither offense scored in the second half, but the Oklahoma defense did. On Nebraska’s opening drive of the second half, Crouch forced a throw on 3rd-and-27. Oklahoma’s Derrick Strait stepped in front of it and went 32 yards the other way for the game’s final score.

Heupel put on a show, throwing for 300 yards in the victory. Crouch rushed for 103 yards and passed for 133, but was just 12-for-27 throwing the ball with the costly turnover. Fagan led all receivers with 95 yards on six catches.

For Nebraska, the loss would serve as just a minor stumbling block at the time. The Cornhuskers had hoped for a Big 12 Championship rematch, but were defeated at Kansas State two weeks later, 29-28. Nebraska had to settle for a 66-17 win over Northwestern in the Alamo Bowl, a 10-2 finish and a No. 8 national ranking.

For Oklahoma, the win asserted itself as a national championship contender. The Sooners ascended to No. 1 after the win and never left that post. Oklahoma managed to grind out close wins over Texas A&M, Oklahoma State and then Kansas State in the Big 12 Championship before capping the year with a 13-2 Orange Bowl win over Florida State for its first national championship since 1985.

One however, might say it was the win over No. 1 Nebraska that put the Sooners back on the map. It came on this day two decades ago.