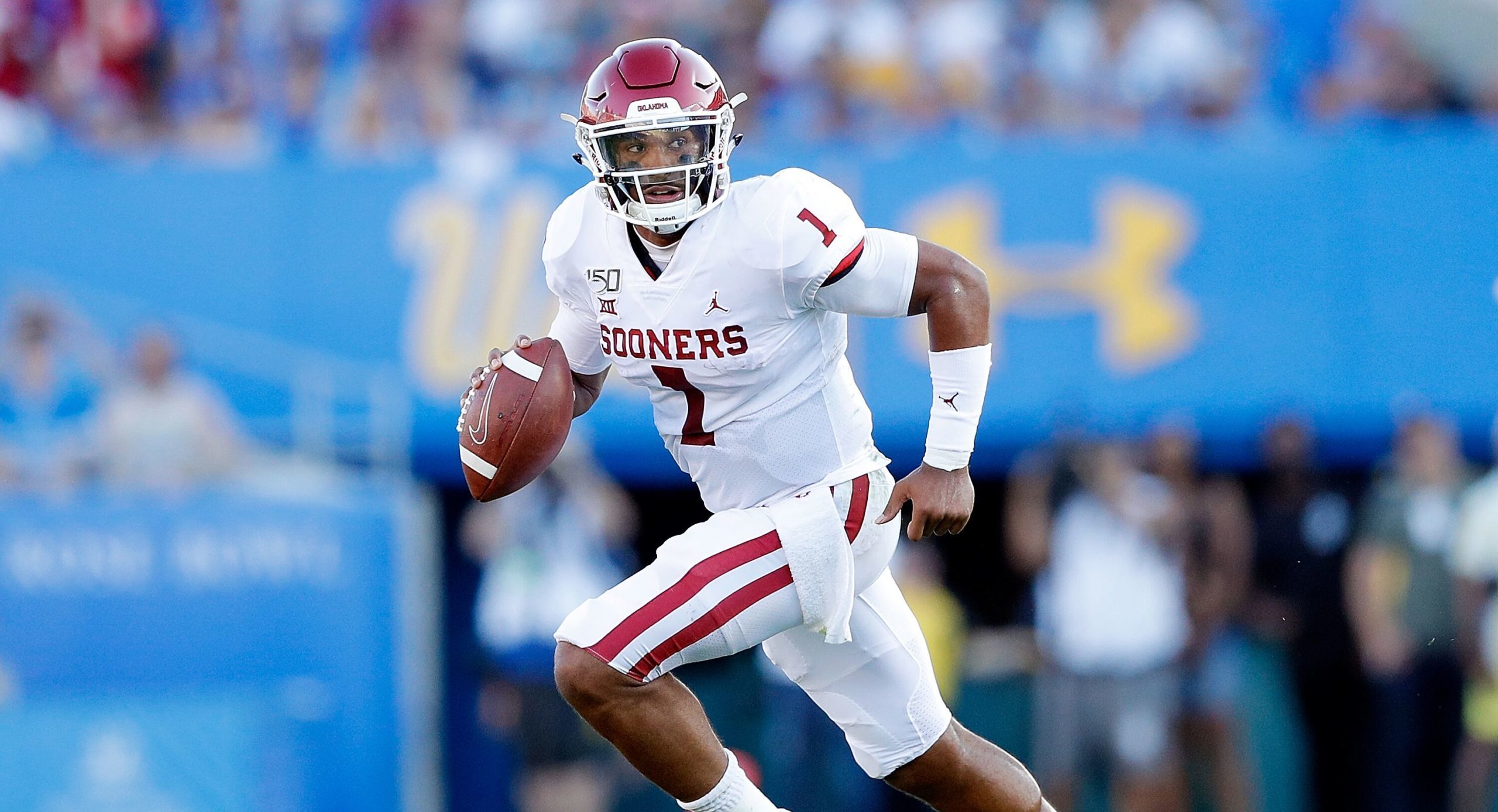 All Images Courtesy of Oklahoma Athletics

In recent memory, the University of Oklahoma has been considered “QBU”.

These quarterbacks have led the Sooners to success in both recent history and overall. As a program, Oklahoma has reached the College Football Playoff four times. That’s to go with 53 bowl appearances and seven national championships.

Oklahoma has had a myriad of quarterbacks who have had success at the college level, and the NFL level as well, so there is a level of controversy that comes with this list. That’s to be expected with the success that the Sooners have had over the years.

There are a lot of factors that go into this, like stats and team success, so a lot of these rankings are a toss-up. However, we’ll be looking at which of these quarterbacks have had a good mix of both of those factors to determine the best in Sooner history.

Here’s a look at the top five:

Jones being so low on the list might come as a surprise to some. He has the most touchdowns and passing yards in Sooner history, but team success and efficiency tells the true story.

While he does lead in both of those categories, he also threw the most interceptions in Oklahoma history and guys like Baker Mayfield rank above him in efficiency as well. This has a lot to do with Jones playing in a massive pass-first offense, which allowed him to put up the big numbers over his four-year career.

As for team success, Jones has won the most games in Oklahoma history, boasting a 39-11 record. That also has a lot to do with him using all four years of his eligibility after taking over for Sam Bradford during his injury-plagued 2009 season. With Jones having a whopping 50 starts as a Sooner, his win percentage takes a bit of a hit. For his career, Jones won 78 percent of his starts.

When it comes to postseason success, Jones did go 3-1 in bowl games and brought the Sooners two Big 12 titles. While those accolades seem good compared to most college quarterbacks, the rest of the quarterbacks on this list exceeded those accomplishments.

Steve Davis is one of the unique cases on this list, as the stats are very deceiving. All Steve Davis did was win. Davis boasts a 32-1-1 record and a career winning percentage of nearly 96 percent (the best out of all multi-year starting quarterbacks). Oh, and he quarterbacked the Sooners to two national championships.

Davis also ranked 21st in pass attempts despite being a three-year starter. He didn’t have the opportunity to put up the insane stats that Landry Jones did, but it translated to winning as stated earlier.

He is also way before his time as well, as he was a dual-threat quarterback far before they were popularized in the modern era. Davis ranked second in the country in rushing touchdowns during the 1973 season with 18.

Although his passing stats are less than impressive, his resume speaks for itself. Oklahoma achieved a lot with Davis under center. Davis fit the wishbone offense and ran it perfectly, leading Oklahoma to multiple championships.

Sam Bradford has to be one of the most statistically efficient quarterbacks in Sooner history with his absurd touchdown-to-interception ratio and his 88 touchdowns. Those totals are even more impressive when you consider the fact he essentially only played two and a half years in Norman. His 2009 season was ended early due to a shoulder injury.

Bradford also had been one of the more successful Oklahoma quarterbacks in recent memory, boasting a 24-7 record. Bradford ranks seventh in school history in career wins despite only playing two full seasons. The 2008 Heisman Trophy winner, Bradford also led the Sooners to the 2009 BCS National Championship game, where they lost to Tim Tebow’s Florida Gators, 24-14.

The two biggest blemishes on Bradford’s record, however, are his 0-2 bowl game record and his injury-shortened junior season. The biggest black eye is the 48-28 loss to West Virginia in the 2008 Fiesta Bowl. The Sooners came into that game as the No. 4 team in the nation and got absolutely embarrassed by the ninth-ranked Mountaineers.

The 2009 season where he suffered two separate shoulder injuries that derailed the Sooners’ season didn’t help his case. Bradford had limited success in the games he actually did play. Unfortunately, that story line ended up following him to the NFL, which leaves everyone wondering what could’ve been had he stayed healthy.

Baker Mayfield has the absurdly good stats of Landry Jones with the efficiency and win percentage of Sam Bradford. Mayfield ranks second in Oklahoma history in wins, boasting a 33-6 record as a starter.

Mayfield’s list of accolades is plentiful, as he led the Sooners to three Big 12 titles, two College Football Playoff appearances and a win in the 2017 Sugar Bowl. As an encore, Mayfield won the Heisman Trophy the following year. The Sooners also never finished outside of the top 5 with Mayfield under center. Their worst AP finish was No. 5 during the 2016 and 2017 seasons.

The only gripe with Mayfield is that he couldn’t get it done in the biggest stage. Mayfield was 0-2 in the College Football Playoff. Mayfield was never able to lead the Sooners past teams like Clemson and Georgia, although he did put up a massive fight against Georgia in the Rose Bowl to close 2017.

Despite that, Mayfield put together one of the greatest careers we’ve seen from an Oklahoma quarterback. That is why he takes the No. 2 spot on this list.

If it wasn’t for his two ACL tears, Jason White would probably be first in every statistical category in program history. Despite that, he still managed to lead the Sooners to success in his five years at Oklahoma.

White had an overall record of 27-4, ranking fifth in program history. While injured, White was replaced by Nate Hybl.

Despite being bound to the pocket with limited mobility from the injuries, White became one of the most accomplished quarterbacks in Oklahoma history.

White won the Heisman Trophy in 2003 and took the Sooners to back-to-back BCS title games for the 2003 and 2004 seasons. Although Oklahoma lost both games, the fact that White led those Sooner teams to play on the grand stage with dominant teams like Nick Saban’s LSU squad and Pete Carrol’s USC team while having the mobility issues was impressive nonetheless.

Had White stayed healthy, there could’ve been multiple national championships in the picture. Even with what he accomplished, he has to be considered the greatest quarterback in Oklahoma history. He was dominant with the situation he was dealt, proving his worth as the top quarterback on this list.

– Rank in parenthesis is all-time in Oklahoma history