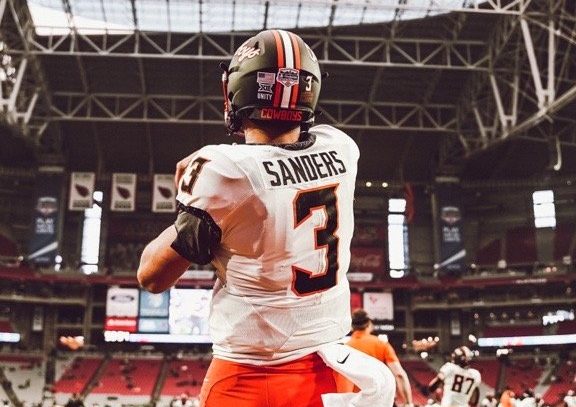 Those who have kept up with the rollercoaster of a career that Oklahoma State quarterback Spencer Sanders has had thus far have seen the highest of highs and lowest of lows.

A headline with Sanders and the Heisman Trophy so close to each other is sure to bring some snark. Skill-wise however, Sanders has what it takes to win the Heisman in 2022.

Here are three reasons why this is a reality.

1. Resiliency on a Grand Stage

It’s true that Sanders’ four interceptions in the Big 12 Championship loss to Baylor was extremely costly. With doubters in full force however, Sanders bounced back nicely. He managed to throw for four touchdowns, zero interceptions, and rushed for 125 yards against Notre Dame in the Fiesta Bowl — a win head coach Mike Gundy called the greatest Oklahoma State victory ever.

After playing one of his worst games, Sanders bounced back to have one of his best. He must now keep that confidence heading into next season.

Obviously, everything is easier said than done. In Glendale however, Sanders looked like a Heisman-caliber quarterback.

Hot and cold is an understatement for what the Cowboys get from Sanders on a weekly basis. One might go as far to say that Spencer is either freezing or burning. While football is the ultimate team sport, Sanders manages to have amazing games with a decent offensive line, a mix of receivers that most people have not heard of and an offensive coordinator who clearly does not trust him.

Placing Sanders in a better environment is not possible. But with the offense he had this year becoming more mature, this is the time where Sanders can develop a better relationship and coordination with his offense and build on a strong finish.

3. Allowing Sanders to be Himself

Sanders is at his best and can dominate the game when he is allowed to run around and make plays. In the Big 12 Championship, offensive coordinator Kasey Dunn chose to run the ball seven times after Sanders’ first interception that came under tremendous pressure.

In a situation where your quarterback just turned the ball over, the entire world knows the first play of the next drive is going to be a run. This was a perfect example of Sanders being handcuffed after making a mistake.

Sanders is at his best and plays with the most confidence when he is allowed to somewhat “freelance”. For Oklahoma State and Sanders to reach their potentially offensively, the Cowboys are going to have to learn to trust their quarterback.

This is clearly a biased take, but it’s hard not to see how dominant Sanders can be when he is allowed to be the best version of himself possible. Paying attention to detail is key.

With another year in the offense and a lot of experience, Sanders can make waves nationally in 2022. For that to happen, the coaching staff is going to have to learn to trust him and play to his skill set.

If everything goes right, Oklahoma State has a player talented enough to win the Heisman Trophy. His name is Spencer Sanders.