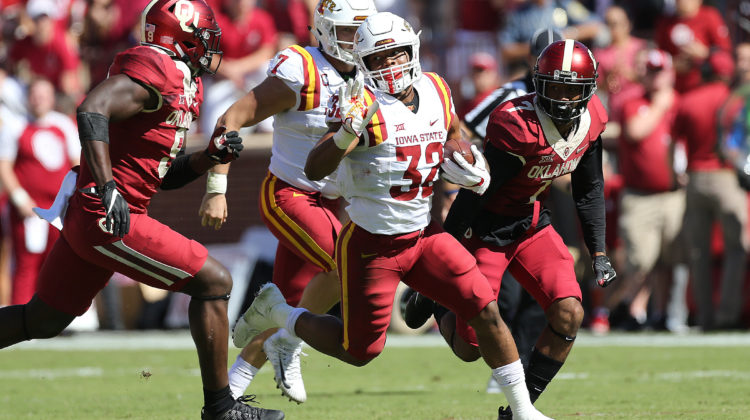 Although the narrative has changed under head coach Matt Campbell, Iowa State has rarely been regarded for its football acumen. During the 2010s, however, highly ranked Big 12 teams should have learned not to sleep on the Cyclones.

On this day five years, Iowa State stunned a sea of crimson and those throughout the college football world. The Cyclones rallied from a pair of 14-point deficits to snap Oklahoma’s 14-game winning streak, 38-31.

Iowa State was 2-2 and coming off its second home loss of the season as it arrived at Gaylord Family Memorial Stadium on Oct. 7, 2017. The Cyclones had gone just 3-9 the year prior in Campbell’s first season. Iowa State was looking for its first win over a top-5 team since handing No. 2 Oklahoma State its only loss in 2011.

Oklahoma, on the other hand, was riding a 14-game winning streak. Ranked No. 3, the Sooners were 4-0 after winning their final 10 games to close 2016. Early on, few would have guessed that streak would come to an end.

Oklahoma led by 14 points on two separate occasions in the first half, but by the end of the third quarter, the Cyclones had drawn even. After Garrett Owens’ third field goal of the day cut the lead to 24-16, Kyle Kempt’s 28-yard touchdown pass to Marchie Murdock capped a 94-yard drive. The proceeding 2-point conversion tied the game.

The final quarter was a little more than two minutes old when Iowa State took its first lead on another long touchdown pass. Kempt’s 57-yard scoring strike to Trever Ryen gave the Cyclones a 31-24 advantage.

Oklahoma answered with a 1-yard touchdown run from Dimitri Flowers, but stopping Iowa State proved impossible. With 2:19 to go, Kempt capped a 75-yard scoring drive with his third touchdown toss of the day — a 25-yard connection to Allen Lazard.

Kempt passed for 343 yards, but with a 38-31 lead, it was up to the Iowa State defense to preserve the victory. Against Baker Mayfield, the eventual Heisman Trophy winner, that would be no small task. Mayfield accounted for 363 yards and three total touchdowns, but his final two passes fell to the turf as the Cyclones took over on downs and ran out the clock.

For Oklahoma, the loss would be its only defeat of the regular season. The Sooners won their next eight games to claim the Big 12 title. After blowing a big lead to Georgia in the Rose Bowl as part of the College Football Playoff, the Sooners finished 12-2 and third in the final polls.

Iowa State would go on to finish 8-5 with a Liberty Bowl win over Memphis. It was the best finish for the Cyclones since going 9-3 in 2000. That signature win from that season required a 14-point comeback to end a 14-game winning streak. It came on this day five years ago.