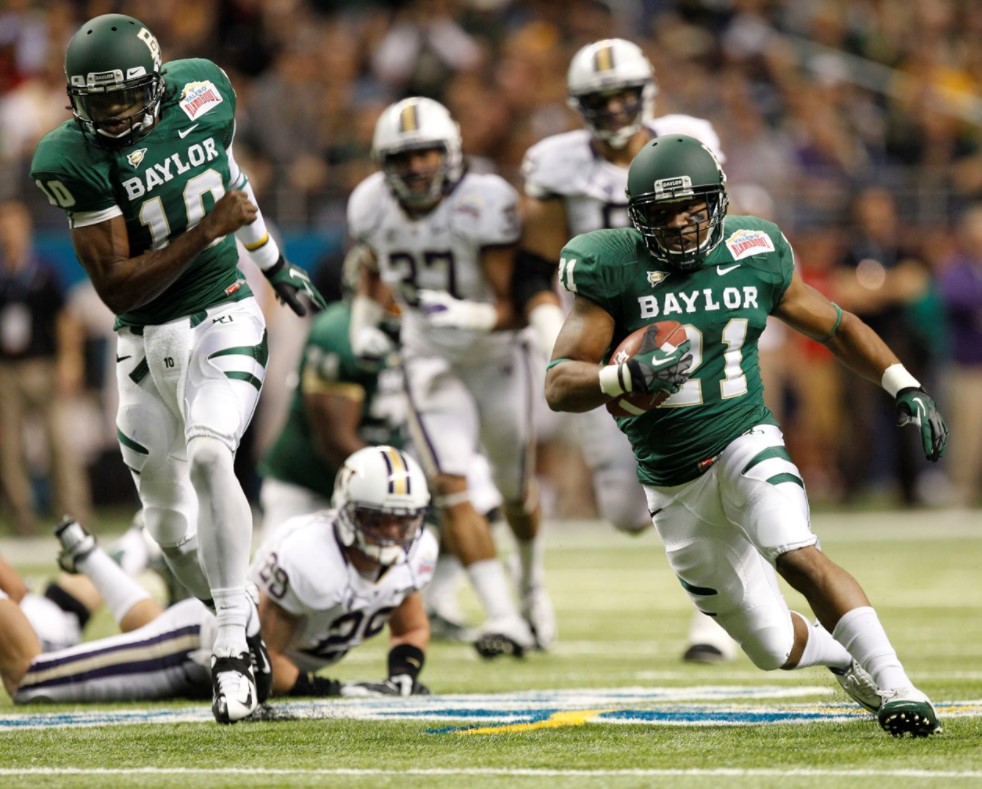 Art Briles’ tenure at Baylor was ultimately marred by controversy. On the field however, his offenses put up points and a lot of them.

That was certainly the case on this day 10 years ago. In what would be the highest scoring regulation bowl game ever, the Bears topped Washington in an Alamo Bowl for the ages, 67-56.

Baylor was 9-3 and ranked No. 15 as it arrived in San Antonio for the Valero Alamo Bowl on Dec. 29, 2011. Led by Heisman Trophy winning quarterback Robert Griffin III, the Bears featured one of the nation’s most prolific offenses.

Washington limped into the bowl with a record of 7-5. After a 5-1 start, the Huskies had dropped four of their final six games to conclude the regular season.

Things could not have started much better for Baylor. The Bears scored touchdowns on each of their first three drives to take a 21-7 lead after a quarter. Washington however, would storm back.

The Huskies scored 35 of the game’s next 38 points. During that stretch, quarterback Keith Price threw for three touchdowns and rushed for another. One minute into the second half, Washington held a commanding 42-24 lead.

Before the quarter was over however, Baylor had the lead. Touchdown runs by Jarred Salubi — his second of the game — and Terrance Ganaway cut the lead to 42-39. Ganaway’s 89-yard touchdown run however, was answered as Price found Devin Aguilar for a 13-yard touchdown. Price’s sixth total touchdown of the day put Washington in front, 49-39.

A pair of 1-yard touchdowns by Ganaway however, gave Baylor a 53-49 lead after three. Washington’s final lead came more than five minutes into the final period. Price’s third touchdown run put the Huskies up 56-53, but again, Baylor had an answer.

It took Baylor just 85 seconds to go ahead for good. Ganaway’s fourth rushing touchdown midway through the period put the Bears in front by four.

Washington marched inside the Baylor 40-yard-line on a long, time-consuming ensuing drive, but it ultimately ended on downs. It took just three plays for Ganaway’s 43-yard touchdown run to seal the win.

The teams would combine for 59 first downs and nearly 1,400 total yards. Baylor finished with 777 yards to 620 for the Huskies.

Griffin accounted for 350 total yards and two touchdowns in his final game, but it was Ganaway who stole the show for Baylor. He finished with 200 yards rushing and five touchdowns.

One might argue that Price was the best quarterback on the field that night. Price accounted for 477 total yards and seven total touchdowns. Chris Polk rushed for 147 yards in the defeat. Washington’s Jermaine Kearse led all receivers with 198 yards and a touchdown on just five catches.

With the victory, Baylor finished 10-3 and No. 13 in the final AP Poll. It marked the first 10-win season for the Bears in 31 years and the highest final ranking since 1986.

Washington finished just 7-6 for the second year in a row under third-year head coach Steve Sarkisian.

The 2011 Alamo Bowl served as the second-highest scoring bowl ever behind the 2001 GMAC Bowl in which Marshall topped East Carolina in two overtimes, 64-61. It remains the highest scoring bowl game ever in regulation. It came on this day a decade ago.