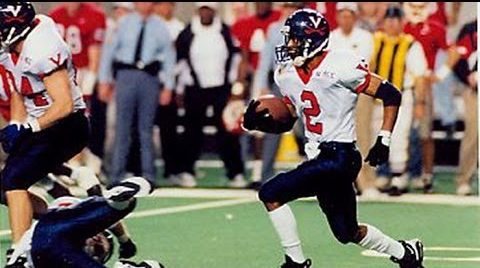 It wasn’t until recently that the Peach Bowl was considered a major bowl game, but through the years, there was no shortage of memorable match-ups.

One of those came on this day 25 years ago. In one of the more dramatic finishes in the history of the contest, Demetrius “Pete” Allen’s 83-yard kickoff return for a touchdown in the final minute lifted Virginia past Georgia, 34-27.

It had been an up-and-down season for No. 18 Virginia as the Cavaliers arrived at the Georgia Dome on Dec. 30, 1995. The Cavaliers were 8-4 with each of their four losses coming seven points or less. Virginia had finished tied atop the ACC, but Florida State was sent to the Orange Bowl despite the Cavaliers handing the Seminoles their first-ever ACC loss.

Under head coach Ray Goff, the campaign had not been a glowing success for Georgia. The Bulldogs were 6-5 and had lost two of three coming in. Georgia made a valiant effort in the game, but the late kickoff return ultimately decided the contest.

For most of the night, Virginia seemed to be in control. Virginia once led by 18 points, but with just over a minute to go, things had tightened up. Still, it didn’t seem like the Cavaliers had much to worry about.

Pinned deep in Georgia territory, the Cavaliers led 27-20. A first down would have cemented the win for Virginia, but all it really had to do was avoid a mistake. That would not be the case.

After a short completion from quarterback Mike Groh to tight end Walt Derey on 2nd-and-11, Derey took a big shot and lost the football. It was scooped up by Georgia defensive lineman Jason Ferguson, who went 10 yards into the end zone for the tying touchdown with just 1:09 remaining.

Georgia was assessed a 15-yard penalty for excessive celebration. Virginia elected to have it enforced on the kickoff rather than force Georgia to try a longer extra point. It turned out to be the right move as Kanon Parkman knocked home the tying PAT.

With Georgia kicking off from its own 15-yard-line, Allen caught the kick at his own 17. Allen was able to find a small hole in the middle of the field and hit it untouched. Allen hit the left sideline and was able to evade a diving Parkman on his way to the end zone with just 57 seconds remaining.

Georgia was able to march past midfield on the final possession. Quarterback Hines Ward’s Hail Mary throw however, failed to reach the end zone. It was knocked down as time expired.

Despite Georgia finishing with 526 yards of offense to 256 for Virginia, the Cavaliers led virtually the whole way. The game was less than 11 minutes old when Virginia led 14-0.

Tiki Barber got the scoring started with a 1-yard touchdown run. After a blocked punt by James Farrior, Kevin Brooks scored from five yards out.

Parkman answered with a pair of field goals for Georgia before Raphael Garcia connected on a 36-yard kick to give the Cavaliers a 17-6 lead. With less than three minutes to play in the first half, Groh found Allen on an 82-yard scoring strike.

Down 24-6, Georgia would finally get in a groove. Ward’s late first-half touchdown run followed by a 2-point conversion drew Georgia to within 10 at the break. The teams traded field goals in the third quarter before Parkman’s 42-yard make early in the fourth quarter brought the Virginia lead to 27-20.

Ward finished with 413 yards passing and a team-high 56 rushing in the loss. Barber led all rushers with 103 yards for the victorious Cavaliers.

With the win, Virginia finished with nine wins and in the top 20 for a second straight season. It marked the fourth top-20 finish in seven years for the Cavaliers.

As for Georgia, the Peach Bowl would be its final game under Goff. Goff was fired at the end of the season after failing to finish better than .500 four times during his seven years in Athens.

For Virginia, the victory would be its final bowl win under legendary George Welsh. It came in dramatic fashion on this day a quarter-century ago.