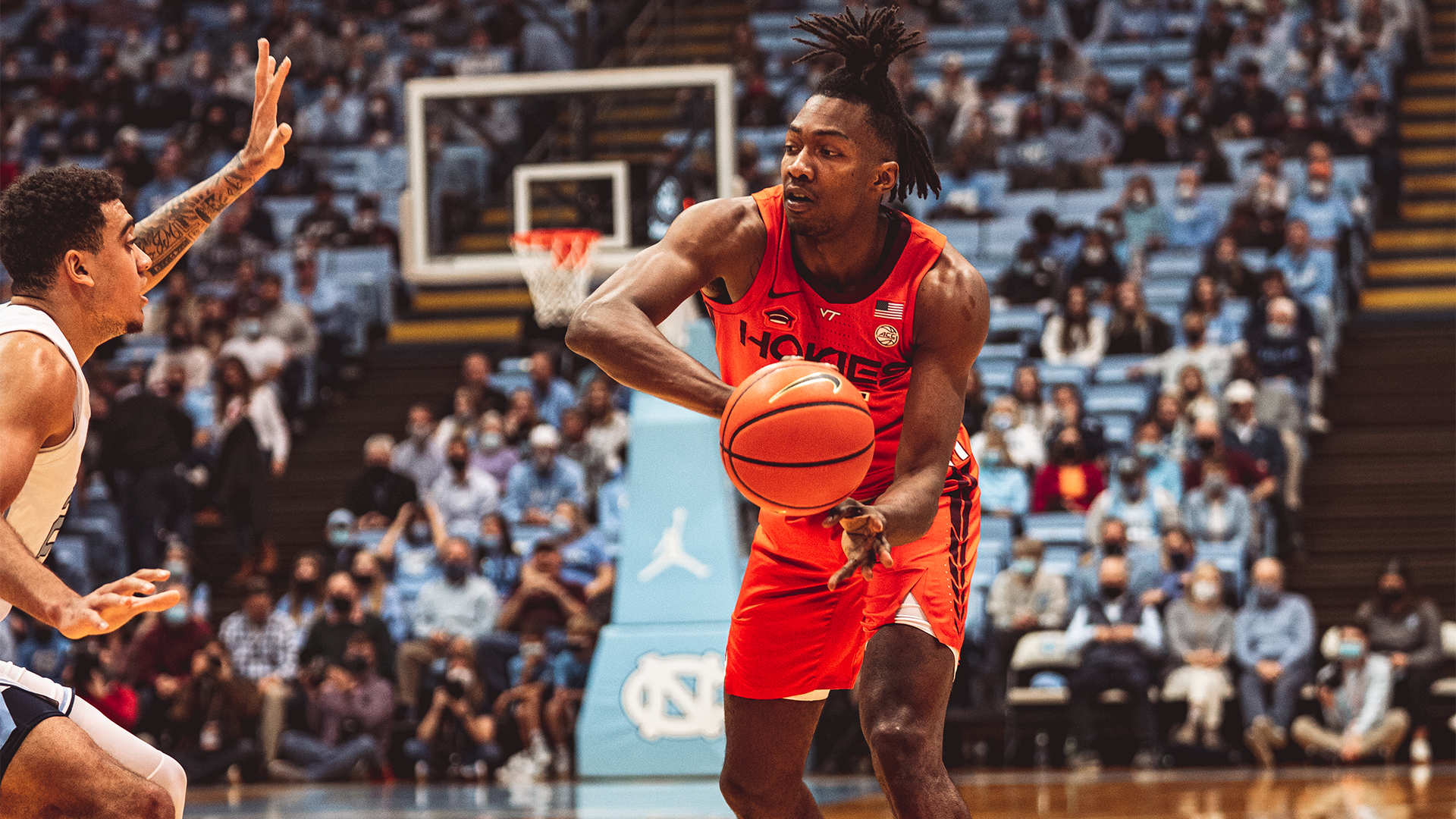 Down, out, beat, bruised and battle-scarred. That’s how you could’ve described Virginia Tech’s season less than just one month ago.

A demoralizing road loss to Boston College could’ve sent the season into a tailspin. A buzzer-beating defeat against Miami on its home floor could’ve signified the beginning of the end of the 2021-22 campaign.

But alas, after an impressive six-game winning streak, the Hokies (16-10, 8-7 ACC) are right back in the NCAA Tournament picture.

A crucial stretch awaited inside Cassell Coliseum to validate its spot for a potential bid into the field of 68. So far, two-for-two.

The fellow bubble occupant Tar Heels (18-8, 10-5 ACC) come to Blacksburg in desperate need of a quality road victory, looking to sweep Virginia Tech in an ever so important bubble matchup that very well could determine the fate of both squads’ postseason aspirations.

It’s hard not to get excited if you were a Virginia Tech fan watching the Hokies play on Monday evening.

In front of one of the loudest versions of Cassell Coliseum you may ever experience, the maroon and orange certainly took advantage.

With commonwealth counterpart and hated archrival Virginia coming to town for a “Big Monday” showdown, you simply couldn’t afford not to if you’re in the shoes of Mike Young and company.

Behind a sold-out crowd of 8,925 that clearly rattled the Cavaliers, Virginia Tech put together one of its best defensive performances of the season. With Keve Aluma tacking on 24 points on the offensive end, there was little doubt left in the Hokies’ 62-53 victory. The Hokies continue to make its case for an improbable bid to the upcoming big dance.

So, how good was that defensive effort? Well, for the first time since 2012, Virginia Tech didn’t allow a single three-point field goal.

0-for-9 from beyond the arc — that was it for Virginia. Also, star guard Kihei Clark was held to just a mere two points throughout the duration of the contest.

On the flip side, the Hokies shot 44% and turned the ball over just six times.

Between the stifling defense and the efficient offense, that’s certainly a recipe for success.

Now, with another huge home game looming on the horizon, can Young’s team repeat the feat and win its seventh-straight?

Only time will tell.

Ah, what a weird year for the Carolina Blue down in Chapel Hill.

We all knew things were going to change with the transition from Roy Williams to first-year head coach Hubert Davis. But, at the same time, no one knew what to expect.

Well, now with less than two weeks to play in the regular season, it seems that we’ve finally figured the Tar Heels out — at least we thought.

What has been a phenomenal team at home and a dismal team on the road, has experienced some opposite trends recently.

Road victories at Louisville and Clemson finally seemed to get North Carolina over the hump. But a shocking Wednesday night home loss to Pittsburgh certainly evened things out. And unfortunately for the Heels, its resume was evened out as well.

As Caleb Love goes, though, so do the Tar Heels. The sophomore guard continues to be a nice facilitator at the top of the key, and can score too by adding 15.1 points per game.

The St. Louis native totaled a game-high 22 points when these two squads met a month ago in a 78-68 North Carolina victory in Chapel Hill, and has since continued to be a solid spark for the Heels when manning the points.

Armando Bacot is a force to be reckoned with down low, too. The 6-foot-10, 240-pounder adds a monstrous presence in the paint by averaging 16.2 points per game and 12.1 rebounds a contest, and could give the Hokies fits after scoring 14 points with 20 boards in the Smith Center in the first meeting of the two.

Everyone talks about having to earn it. Well, if Virginia Tech is to secure another marquee conference win, that saying certainly would be in full effect on Saturday afternoon.

This is going to be an extremely fun, high-level game of college basketball inside Cassell Coliseum.

Two squads that desperately need this victory to climb into the field of 68. Two squads starting to trend in opposite directions, and two squads playing for the exact same reason to accomplish an ultimate goal. How fun is college basketball?

The Tar Heels got the best of the Hokies in Chapel Hill just a little under a month ago, and they’ll be hungry to avenge a damaging loss to Pittsburgh. But you simply can’t pick against a team that’s won six-straight when its in its home arena.

Virginia Tech will win its seventh-consecutive contest, and will continue to climb back within the NCAA Tournament ranks.