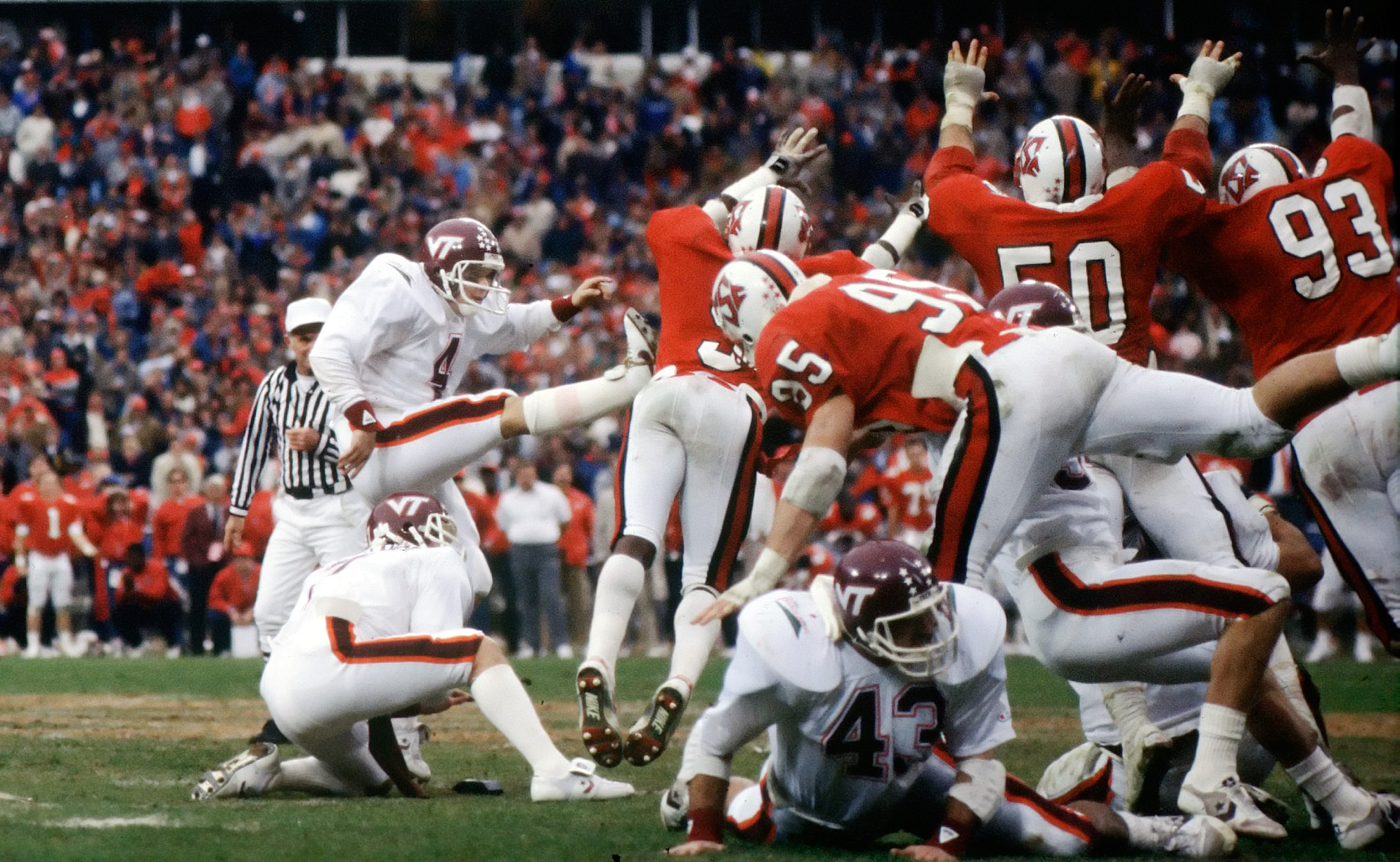 Virginia Tech has become a mainstay in bowl games over the last 30 years.

From 1993 to 2019, the Hokies made a bowl every year. The only bowl they have ever played in that was decided by just a single point however, came on this day 35 years ago.

Against NC State in the Peach Bowl, Chris Kinzer knocked through a 40-yard field goal as time expired to lift Virginia Tech to a thrilling 25-24 victory.

Virginia Tech and NC State were each 8-2-1 as they arrived at Fulton County Stadium on Dec. 31, 1986. The Hokies had closed the regular season on a 4-game winning streak. Virginia Tech had been 0-4 all-time in bowl games.

NC State was ranked No. 18 as it arrived in Atlanta. The Wolfpack had won five of six to close the regular season.

Virginia Tech would finish with 200 yards more than NC State in the contest, but with less than two minutes to play, it was on the short end of a 24-22 score. The Hokies started their final drive at their own 20-yard-line and with three timeouts.

With the game on the line, Chapman again found Johnson — this time for nine yards and a first down. On the next play, Virginia Tech was called for holding. NC State however, would return the favor with a pass interference call with four seconds remaining.

With the ball on the NC State 23-yard-line, Kinzer was sent onto the field. Kinzer had been clutch for the Hokies all season and had hit a 46-yarder earlier in the contest.

With the game on the line, he did not disappoint. His kick split the uprights with no time left.

Kinzer’s first make had given the Hokies a 10-7 late in the first quarter. Virginia Tech started strong with a 1-yard touchdown run by Eddie Hunter, but the Wolfpack evened the game when Brian Bullock fell on a blocked punt in the end zone.

NC State used a pair of second-quarter touchdown passes from Erik Kramer to take a 21-10 lead into the locker room. Kramer threw touchdown passes to Nasrallah Worthen and Ralph Britt, but NC State would not find the end zone again.

Virginia Tech regained the lead with a pair of touchdowns over a 6-minute stretch during the third and fourth quarters. Maurice Williams’ 1-yard touchdown run was followed by a 6-yard touchdown pass from Chapman to Johnson. The 2-point conversion failed after each touchdown.

NC State’s final points of the night and only points of the second half came midway through the fourth quarter as Mike Cofer connected on a 33-yard field goal. His make gave the Wolfpack a 24-22 lead. NC State threatened to put the game away following a successful fake punt, but linebacker Jamel Agemy came up with consecutive tackles for loss to force a punt and give the Hokies one last possession.

With the loss, NC State finished 8-3-1 and outside the polls under first-year head coach Dick Sheridan.

Under Bill Dooley, the Hokies finished 9-2-1 and No. 20 in the final AP Poll. The nine wins tied a school record at the time as Virginia Tech finished ranked for the first time in 32 years. Dooley would accept the job as Wake Forest head coach following the season.

The victory served as the final win for Dooley at Virginia Tech. It was also the first bowl win for the Hokies. It came on this day 35 years ago.