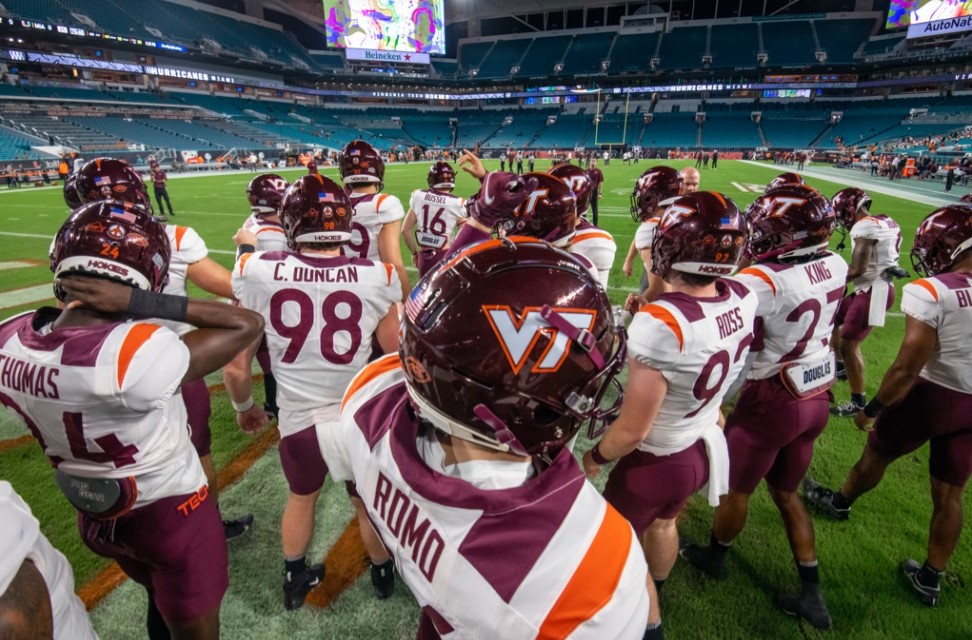 The weekend after Thanksgiving is always a special time of year throughout college football.

The rivalry games, the pure hatred, and the passion shown on gridirons across the country makes up the DNA of the sport we all love.

When the Hokies (5-6, 3-4 ACC) and the Cavaliers (6-5, 4-3 ACC) prepare for battle inside Scott Stadium on Saturday, emotions will be running high with both schools desperately wanting to take down their cross-Commonwealth foe.

Isn’t that the beauty of it though?

It wasn’t exactly the debut that interim head coach JC Price and company were looking for down in South Florida last weekend.

357 yards in the air simply can’t happen if you’re Justin Hamilton’s defense. Those yards were a result of those recurring issues.

This one was 21-3 before fans even had a chance to settle in, but to the Hokies credit, they found something offensively on the ground with backup quarterback Connor Blumrick.

It even got to the point where the converted running back and tight end took the reins towards the back half of the contest. Blumrick got more and more comfortable with the passing game, and totaled five completions for 39 yards and two touchdowns — the firsts of his career.

It’ll be interesting to see how Price and Cornelsen plan to rotate the two as the Hokies head to Charlottesville. But one thing is for sure: it’s crucial they figure it out if Virginia Tech is to get to that coveted sixth win to reach bowl eligibility.

It’s not unusual that Virginia Tech finds itself having to defend the Commonwealth Cup. It has continually been the hunted in recent series history. The Hokies have only being the hunters once in the last 17 seasons.

It’s been a series of pure domination for Virginia Tech. The Cavaliers have caught up as a program. Now, can they translate it to the field? That’s the bigger question.

In terms of the game itself, it’ll be interesting to see who Virginia Tech appoints as the starting signal-caller. All signs continue to point to Burmeister, but don’t be surprised if Blumrick is mixed in with the Oregon transfer behind center.

The Hokies are also going to have an opportunity to get the ground game going with Blumrick, Raheem Blackshear, and Malachi Thomas. Which will be crucial to do so against one of the worst statistical defenses in all of the Power 5.

The same is true with the passing game. Look for guys like Tre Turner, Tayvion Robinson, and potentially true freshman Da’Wain Lofton to have some opportunities in space against a subpar Virginia secondary. Hitting opportunities like that is a must for the Hokies if they’re to avoid their second straight loss in Charlottesville.

Defensively, it’s got to all click for Virginia Tech against a lethal Cavalier offense. Guys like Jermaine Waller and Tae Daley will need big games in the secondary against a pass-heavy offense. They could be the key to taking home the Commonwealth Cup.

What To Watch – Virginia

It’s been an uphill battle for sixth-year head coach Bronco Mendenhall and his staff since taking over in Charlottesville. To the former BYU head coach’s credit, he’s quickly made Virginia into a consistent ACC Coastal contender.

He took the Wahoos to a bowl game in just year two of his tenure, he won the division by defeating Virginia Tech in year four, and he has the program positioned for consistent success in year six.

Throughout his tenure, it’s been all about quarterback play.

First, it was Kurt Benkert. Then, it was Bryce Perkins. Now, it’s Brennan Armstrong, who has quickly turned himself into one of better quarterbacks in the ACC. That’s saying something too with the depth the league possesses.

The Canton, Ohio native has a 65% completion rate, throwing for just over 4,000 yards, and recording 30 touchdowns along the way. That’s quite the total considering the time he’s missed with a knee injury.

He’s got a multitude of weapons too. Wide receiver Dontayvion Wicks provides quite the threat in the passing game for Armstrong and the ‘Hoos. Don’t forget about Mississippi State transfer Keytaon Thompson and Highland Springs native Billy Kemp, either. The Cavaliers are as dynamic as anyone in the passing game, so holding Armstrong down will be a must if the Hokies want to leave Scott Stadium with a victory.

Defensively, there are a lot of holes, but star safety Joey Blount provides some continuity in the Virginia secondary. Noah Taylor adds experience to the linebacking corp.

It’s a team that’s lost three straight, so Virginia Tech will see the ‘Hoos’ best shot on Saturday afternoon, as they’ll try to avoid a four-game losing streak to close out the regular season and yet another loss at the hands of the Hokies.

If Virginia Tech plans on winning this game, Hamilton’s defense will have to do exactly what it did not do last week.

Get to Armstrong, make him uncomfortable, and subdue the left-handed threat in the air. Those are musts.

The Duke win aside, Virginia Tech hasn’t had a game where it has decisively won the turnover battle in quite some time.

The Hokies need to get a big takeaway and likely a couple to gain an advantage on the offensive side of the ball.

It’s inevitable that Virginia Tech will rotate Burmeister and Blumrick at the quarterback position.

It needs to feel out the hot hand, make a decision, and stick with it. That’s likely going to include running the ball.

The Hokies will need to keep the ball away from that Virginia offense, shorten the contest and give themselves the best shot to win.

With last week’s performance defensively for Virginia Tech, and the offensive ability that the Cavaliers possess, it seems like a mismatch.

Tech’s offense will have to keep up. Given Virginia’s defensive struggles, it certainly can, but it won’t be enough.

The Wahoos will take back the Commonwealth Cup and send the Hokies home with a second consecutive losing season.