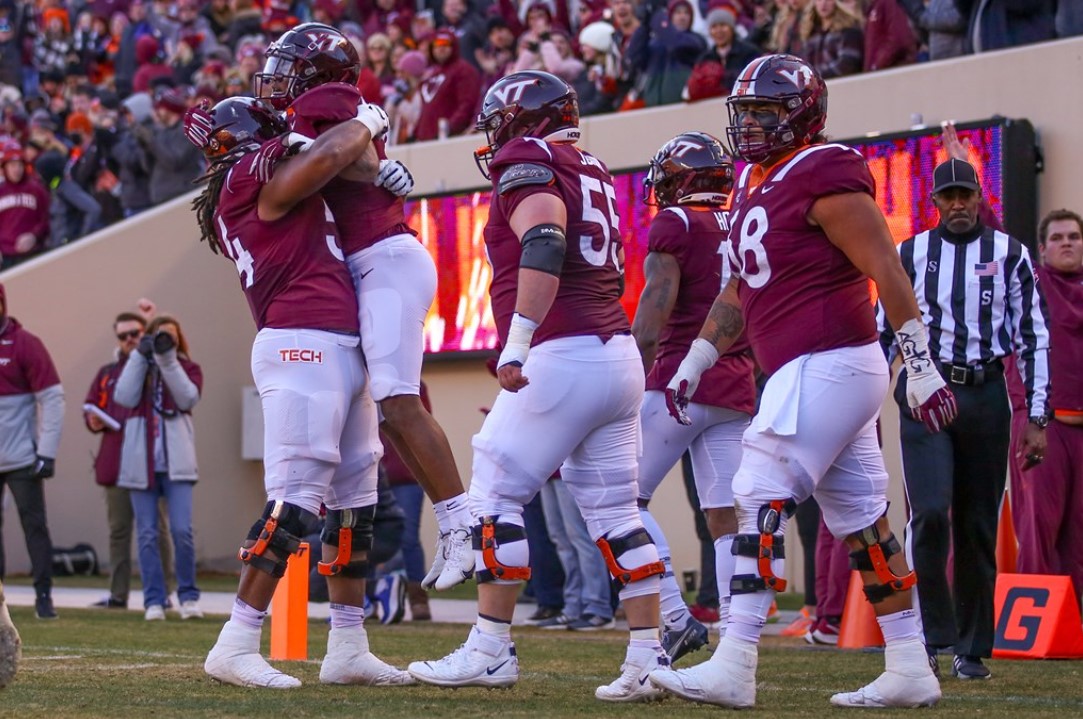 It’s been a historic week for Virginia Tech football.

For the first time since 1977, the Hokies (5-5, 3-3 ACC) have fired a football coach. Out goes Justin Fuente. In comes interim JC Price, a former Virginia Tech defensive lineman and a member of the 1995 team that beat Texas in the Sugar Bowl to kickstart the height of the Frank Beamer era.

The writing was on the wall regarding Fuente’s future in Blacksburg. But now with just two weeks left in the regular season, the Hokies are without a head football coach.

Almost forgotten by the Virginia Tech fan base this week is that there’s still a football game to be played on Saturday. It’s a big one, too.

The Hokies will travel down to South Florida to face Miami (5-5, 3-3 ACC) in a battle for bowl-eligibility — Price and company’s main focus at this point in the season.

It seems like ages ago that Virginia Tech took down Duke at Lane Stadium.

It was a nice way to go out for Fuente coaching his last game in Blacksburg. In the 48-17 victory, the Hokies statistically put together their best offensive performance in three seasons, and were clicking on all cylinders really for the first time this season.

Quarterback Braxton Burmeister went a solid 9-for-15 passing for 215 yards and a career-high three touchdowns in what likely was the Oregon transfer’s best performance in the maroon and orange.

The ground game was as good as it’s been all year too. The Hokies rushed for 297 total yards, aided by the showing of Rutgers transfer Raheem Blackshear. He put up 117 rushing yards and a touchdown.

Keshawn King had a nice day as well. 90 yards on nine carries and two all-purpose touchdowns were in the cards for the sophomore from Florida. He provided a much-needed spark to an offense that had been severely lacking for a majority of the season.

It was a masterful performance offensively for Virginia Tech. The Hokies eclipsed the 500-yard mark for the first time since the shocking loss to Old Dominion in 2018.

It was another strong showing by Justin Hamilton’s defense as well. Virginia Tech gave up just 17 points for the third consecutive contest, and kept Duke to under 300 yards of total offense before a garbage-time touchdown drive engineered by backup quarterback Jordan Moore.

It’s the perfect formula for the Hokies to get their sixth win. We’ll see if it continues on Saturday night in South Florida.

A big question always seems to loom when a head coach gets fired midseason. How motivated will the players be?

We’ll guess the Hokies will be fine under the tutelage of Price, but you never know under these gut-wrenching circumstances.

Price bleeds orange and maroon. He loves Virginia Tech, and he embraces the opportunity to lead this team back to a bowl game after a one-year absence.

The longtime assistant at both James Madison and Marshall took the entire team to the April 16 Memorial on campus Thursday morning to “maintain our why. Understand how important this place is. Give these guys a reminder of what it means to be a Hokie.”

There aren’t a lot of major injuries to report for this one. It’s important to point out wide receiver Tre Turner’s travels down to Miami — as odd as that sounds.

The Greensboro, N.C. native sustained a hit against Georgia Tech that trapped air in his neck less than a month ago. While he’s able to suit up, flying isn’t an option. Turner had to make a 13-hour drive in order to be ready to go Saturday evening.

Virginia Tech will need the star receiver to get back into the fold in order to have a chance the rest of the way. A win would make a 26-hour round trip well worth it for both Turner and the Hokies.

What To Watch For – Miami

It’s been quite the up-and-down season for head coach Manny Diaz and the Miami Hurricanes.

Ironically, if Fuente was still Virginia Tech’s head coach, both of these teams would be in almost identical situations: Both with the exact same record, both having disappointing seasons, and both having head coaches that likely are on their way out.

To be fair, the Hurricanes have had quite the shakeup, losing star quarterback D’Eriq King early on in the season. However, Tyler Van Dyke has stepped up nicely after a couple of rough outings to start his collegiate career.

The Glastonbury, Conn. native has settled in by throwing for 2,193 yards and 19 touchdowns this season. He has amassed a QBR of 77.9 as a second-year freshman.

The Virginia Tech secondary must look out for star receiver Charleston Rambo. The junior from Texas is fourth in the ACC in receiving yards with 955 and five touchdowns. He’ll be Miami’s biggest threat on the offensive end.

The ‘Canes aren’t the type of team that’s going to gash you on the ground, but the Hokies will still have to respect Jaylan Knighton out of the Miami backfield.

Defensively, linebackers Corey Flagg Jr. and Waynmon Steed are guys to watch for in the middle of the field. Losing safety Bubba Bolden has proved to be a huge loss for the Miami secondary.

It’s been quite the rollercoaster season for Miami thus far. Heartbreaking losses to Virginia and North Carolina, followed up by big wins over NC State and Pittsburgh prove just that.

With the Hurricanes’ recent loss to Florida State in a gut-wrenching fashion, they’ll want to right the ship this weekend at Hard Rock Stadium.

Don’t be confused with a fast start. This is different.

Virginia Tech fans everywhere want to see energy, enthusiasm, and love for the program early in this one. Take every opportunity to build on momentum if you’re the Hokies, and try to replicate what was done just two seasons ago down in South Florida.

Get The Passing Game Going

The Hurricanes have given up 32.4 points per game this season, and that includes a shutout against Central Connecticut State. The secondary is a point of attack.

Virginia Tech must keep going to the hot hands of Turner and Tayvion Robinson, and run the ball to set up big plays through the air.

After a missed 24-yard field goal at West Virginia early on this season, Virginia Tech’s John Parker Romo has been absolutely money, going 12-for-14 since that miss.

Miami kicker Andres Borregales has had a similar season after missing a potential game-winning 33-yard field goal against Virginia earlier this season. That includes a 55-yard make.

This game could come down to a kick. That’s why it’s a key to the game.

It’s really hard to know what you’re getting from each of these teams given the circumstances and type of season it has been for each.

Because it’s at home, and because of the coaching change for Virginia Tech, we’ll say Miami makes one more play than the Hokies do. That’ll be the difference as the Hurricanes reach bowl-eligibility.