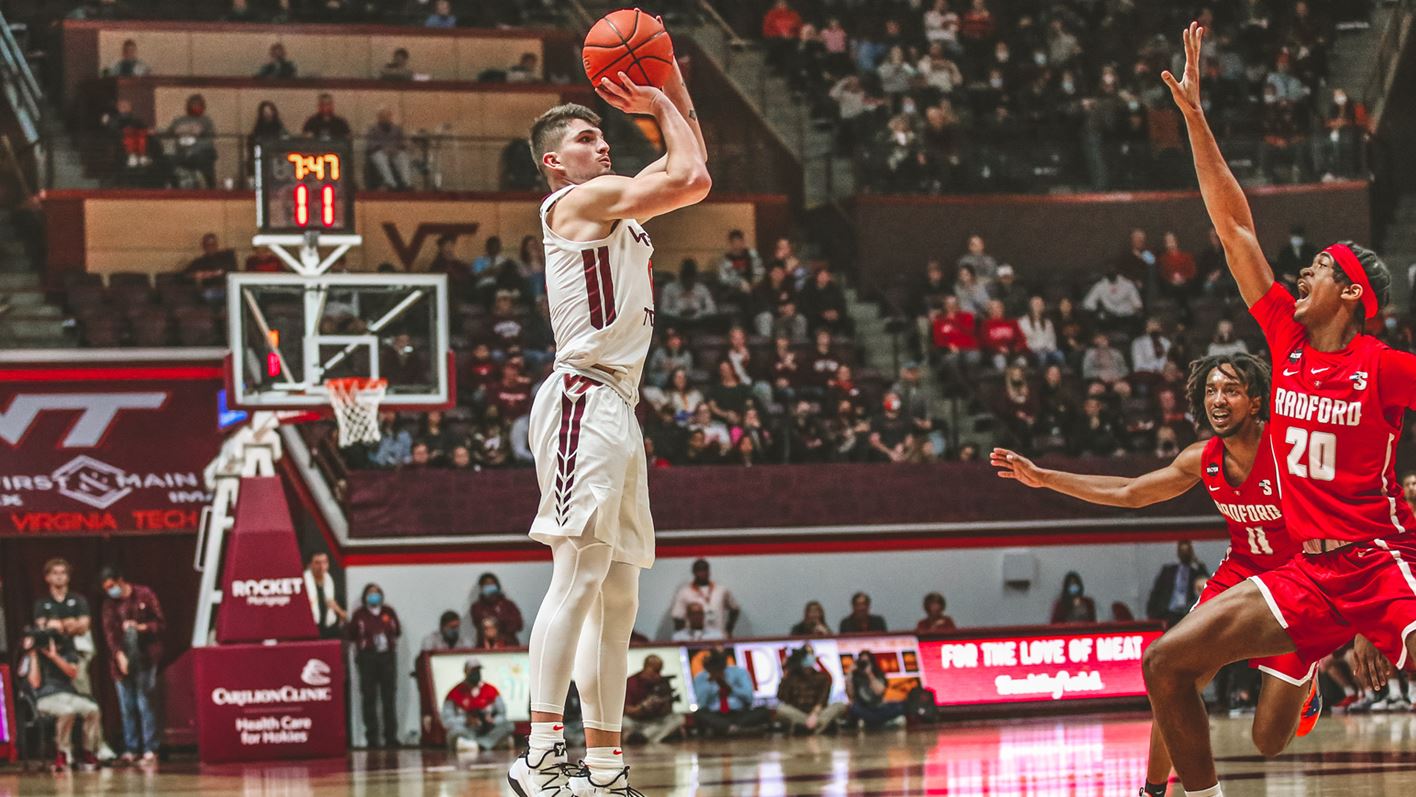 Out in a flash, Virginia Tech is off to a 3-0 start, and that’s no pun intended.

The Hokies have played an energetic brand of basketball so far during the 2021-22 campaign, and with just two tune-ups remaining before the non-conference slate starts to thicken, it’s integral that Virginia Tech continues this positive momentum.

The first of those tune-ups? A date with the Saint Francis (Pa.) Red Flash (1-1) — yet another low-major program with low expectations as we entered this season on the hardwood.

It was an ugly first half by the Hokies in their 65-39 victory over Radford on Monday evening. Sloppy turnovers, missed opportunities, and an overall discouraging shooting effort resulted in just a 25-point first period of play for Virginia Tech.

It certainly couldn’t have been pleasing to head coach Mike Young. Luckily for Virginia Tech, it turned it on against its New Rival Valley rival. While they still had 15 turnovers and just shot 43% from the field, the Hokies cruised to a 26-point victory in Blacksburg.

Virginia Tech was led by Wofford graduate transfer Storm Murphy at the top of the key. The fifth-year starter put up a season-high 17 points, breaking through for the first time in the maroon and orange.

Justyn Mutts, 11, and Keve Aluma, 10, also finished in double-figures, totaling a combined 21 points to pose a solid threat for Virginia Tech on the floor Monday evening.

David N’Guessan and Darius Maddox continue to come on. Naheim Alleyne and Hunter Cattoor have struggled shooting the ball thus far, but it is likely they’ll break this slump at some points.

The Hokies also played suffocating defense, forcing 18 turnovers, and surrendering less than 40 points for the second time in the Young era. With the main questions surrounding this team being on the defensive side of the ball, that’s a welcomed sight.

There aren’t a lot of expectations this year for head coach Rob Krimmel and Saint Francis (Pa). Picked eighth out of 10 teams in the always competitive NEC in the preseason poll, the Red Flash are trying to put together a bounce-back season after going 6-16 a year ago. That did however, include an upset of Pittsburgh.

If there’s anyone to get the program back to the NCAA Tournament for the first time since 1991, it’s Krimmel. He played for Saint Francis (Pa.) from 1996 to 2000, and hasn’t left since.

The Red Flash have something to build on from last season. They returned their top two scorers. Ramiir Dixon-Conover (15.5 points per game) and Myles Thompson (10.1 points per game) are back in the fold. Krimmel’s team possesses five guys who are averaging double-figures in the early stages of 2021-22.

This team can score. A near upset of George Washington saw the Red Flash put up 72 points, and a recent 100-point performance over Division III Franciscan certainly will open up some eyes, regardless of the opponent.

This one shouldn’t be close, but for Virginia Tech, it’ll put its developing defense to the test once again.

Another tune-up game for the Hokies will be depicted in the final score.

Last time Saint Francis (Pa.) came to Blacksburg, it was a near 40-point victory for Virginia Tech. It likely won’t be that bad this time, but it still will be a dominant victory against a low-major that comes in vastly overmatched.