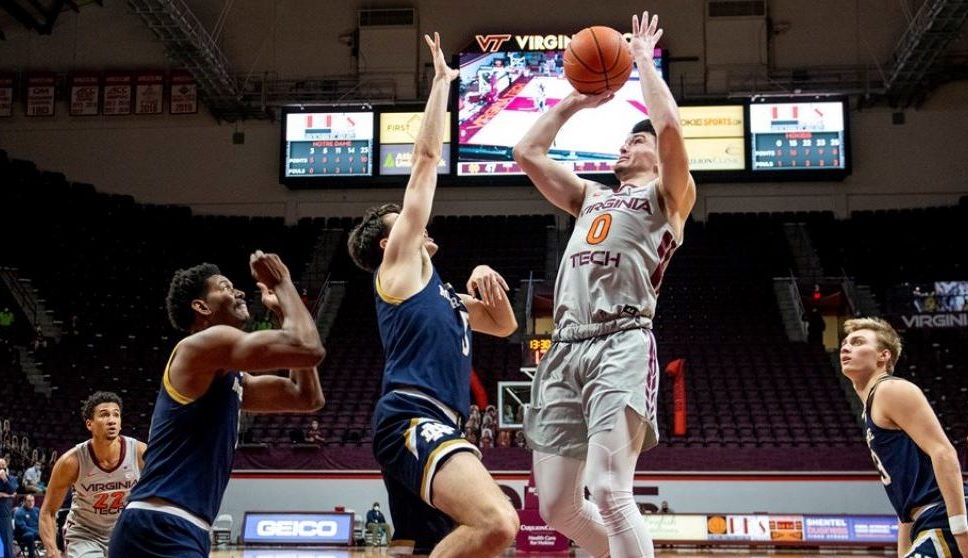 All the anticipation, all the excitement, all of the eagerness; it’s all pointed towards this evening. Virginia Tech men’s basketball’s 2021-22 season is finally here.

Many believe head coach Mike Young and company will take yet another step forward and become a legitimate threat to win the ACC. Fans also hope a deep NCAA Tournament run is in the cards.

Virginia Tech opens its season against Maine, looking to get a nice feel-good win heading into a tough non-conference stretch.

Oh boy, is this team going to be fun to watch.

Picked fifth in the ACC, there’s arguably more hype going into this season for Virginia Tech than any other year in recent memory. The 2018-19 season is probably the only year that could rival that statement. It’s for good reason too.

The Hokies are coming off a year in which they found themselves as one of the biggest surprises in all of college basketball. Originally picked to finish 11th in the ACC, Young’s team fought to a third-place finish, and heard their names called on Selection Sunday for the fourth consecutive year.

The scary thing is, it’s all going up from here.

Not only does Virginia Tech return three starters from last year’s squad in Keve Aluma, Justyn Mutts, and Naheim Alleyne, but it’ll possess much more of an offensive threat at the top of the key this season in the form of Wofford transfer Storm Murphy.

Add in Hunter Cattoor to the starting five, and the Hokies legitimately have five pure shooters making up the starting rotation. All are capable of scoring in double figures on a regular basis.

This team is going to score, and they’re going to score a lot. It’s going to be a matter of whether or not Virginia Tech can defend. That is where the loss of outgoing guard Wabissa Bede hurts. But with the offensive firepower this team showcases, the Hokies should be able to make up for a little bit of a drop-off defensively.

Murphy comes to Blacksburg two years removed from a round of 32 appearance for Mike Young’s Terriers. The fifth-year senior will take his nearly 18 points per game to Southwest Virginia to reunite with Young and former teammate and preseason All-ACC pick Aluma, who also started his career in Spartanburg.

All eyes this season will be on the 6-foot-9, 235-pounder for the Hokies. The potential ACC Player of the Year will look to build off a dominant debut season for Virginia Tech when he averaged 15 points and eight rebounds.

The Maine Black Bears come into Cassell Coliseum looking to gain any type of program momentum they possibly can under fourth-year head coach Richard Barron.

The Black Bears sure haven’t had much of it. Maine hasn’t reached double-digit wins since the 2012-13 season, and will arrive in Blacksburg as one of the worst teams statistically in all of Division I during that stretch.

It’s a program that has never qualified for the NCAA Tournament, and one that had just two players who averaged more than seven points per game last season.

Guard LeChaun DuHart will be the guy to watch. The Western Wyoming transfer averaged 11 points per contest in the Black Bears’ pandemic-shortened 2020-21 campaign. He’ll have to carry the workload if he’s to keep Barron’s team in the game against a top-tier ACC opponent.

Ontario native Stephane Ingo will be another attention-seeker down low. Unfortunately for Maine, there will be very little help beyond those two guys for the significantly-undermanned Black Bears.

This should be the perfect tune-up game for Virginia Tech: See what you have, welcome fans back to Cassell Coliseum in a big way, and tinker with different rotations. It’s a temperature check for Young and company.

The Hokies will cruise to a dominant season-opening win in Blacksburg before traveling to Navy later this week.