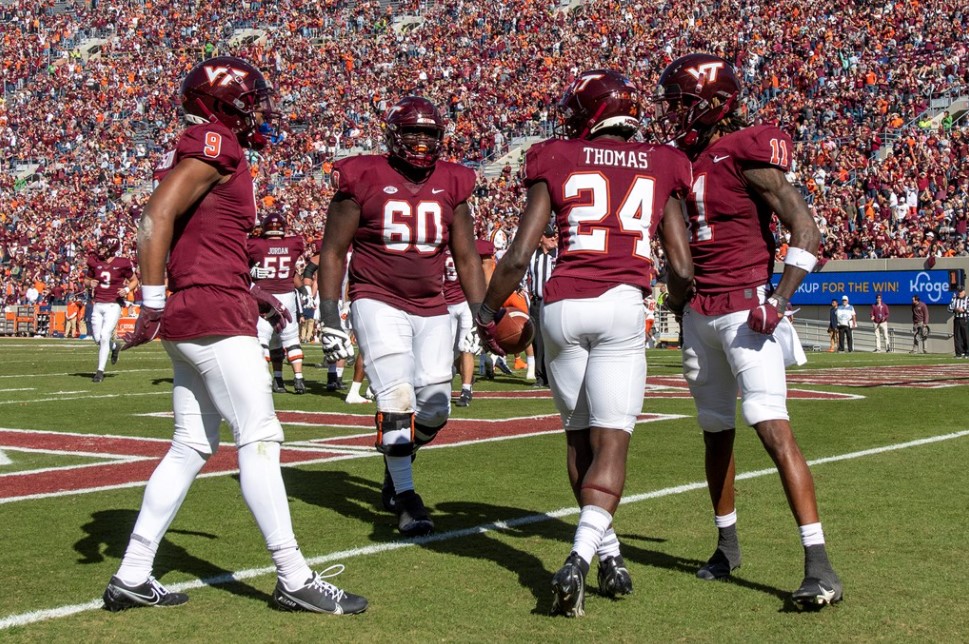 Typically over the course of the last decade or so, the “Battle of the Techs” between Virginia Tech (3-4, 1-2 ACC) and Georgia Tech (3-4, 2-3 ACC) would determine a winner for the ACC Coastal division.

This year? Well, not so much.

Instead, we’ll be able to determine something much different this season. That is, who’s less inconsistent, and who has the better shot to sneak into a third-tier bowl game this holiday season.

These two programs have taken a step back since the stretch from 2004 to 2015 when they combined to win the ACC or represent the Coastal division in 11 of 12 seasons. We’ll see just who can steal a win this weekend in the first meeting since 2019.

Another week, another disappointing result for Virginia Tech. The Hokies blew a nine-point lead with just over five minutes to play in a 41-36 stunning home loss to Syracuse. The latest heartbreaking loss has Virginia Tech fans asking themselves, “when is this going to change?”

The answer is we don’t know, but the writing seems to be on the wall with what’s to come of head coach Justin Fuente’s future in Blacksburg. If he wants any chance of earning a seventh season head whistling the maroon and orange, he desperately needs to get a win in Atlanta.

Bad home losses have plagued Fuente throughout his tenure on the sidelines at Lane Stadium. Last weekend was certainly no exception.

Despite 151 yards and three touchdowns from true freshman Malachi Thomas, along with an offensive outburst in which the Hokies put up a season-high 36 points, Virginia Tech still can’t figure it all out.

One week, it’s the offense; the next week, it’s the defense. Virginia Tech still continues to find new ways to lose. It’s fueled the fan base’s frustration all that much more when it comes to evaluating the Fuente era.

Inconsistency. That’s the best word to describe it. The Hokies are so close to being 6-1, but unfortunately for the folks in Blacksburg, they have to play all 60 minutes.

This Virginia Tech team has shown some flashes. But can it all come together? That’s the big question the Hokies have heading down to the flats.

Seven games into the season, it seems like Virginia Tech has finally figured out its backfield situation.

Is it Keshawn King? No.

Is it fifth-year junior Jalen Holston? Actually, no.

How about Rutgers transfer Raheem Blackshear? Also, no.

Instead, it’s the 6-foot-0, 197-pound Thomas who’s set to take over as the Hokies’ starting back. Who had that on their 2021 Virginia Tech football bingo card? Certainly not us.

It seems as if Fuente and offensive coordinator Brad Cornelsen have finally found their two-deep in the backfield more than halfway into the year. Thomas, a Georgia native, and Blackshear look to take majority of the carries.

It still begs the question: how will this Hokie offense follow up its best performance of the season? To have a repeat performance, it’ll certainly need those two backs to pick up where they left off last weekend.

On the flip side, can this Virginia Tech defense bounce back from its worst defensive performance of the year?

Linebackers Dax Hollifield and Alan Tisdale will certainly have a big say in that after an off week against the Orange. Both the secondary and the defensive front will also have to step up after lackluster performances against Syracuse.

It’s still unclear whether or not star cornerback Jermaine Waller will be good to go after suffering a foot injury two weeks ago against Pittsburgh. The Washington D.C. native gave it a try last weekend, but didn’t play a snap in the second half.

There’s big question marks for the Hokies, but fortunately, the team across the ball has just as many.

What To Watch For – Georgia Tech

It’s still a work in progress for third-year head coach Geoff Collins and the Yellow Jackets.

Transitioning over from Paul Johnson’s triple-option offense to a more common offensive scheme certainly isn’t an overnight fix. It has shown thus far.

While Collins’ team looks much improved as his own personnel begins to arrive on campus, this still is a team that lost to Northern Illinois earlier this season. That being said, they’ve had their moments as well. Knocking off a ranked North Carolina team certainly fits the bill, and a near upset of then-No. 6 Clemson in Death Valley also caught some eyes.

At the end of the day however, it’s a similar story to the Hokies. Inconsistencies swirl when taking a deeper dive into the makeup of this Georgia Tech team.

The Ramblin’ Wreck’s wheels only spin when quarterback Jeff Sims is on point. He can throw the ball when he needs to, but the ground game for the Jacksonville, Fla. native really is what separates himself from everyone else in the ACC.

Sims has accounted for 320 yards and four touchdowns so far on the ground this season for the Jackets. With the history of Virginia Tech’s defense and mobile quarterbacks, it could be a long afternoon for the Hokies if Sims has a big day with his legs.

Star back Jahmyr Gibbs is a solid threat in the running game as well for Georgia Tech. Compliment him with Dontae Smith in the backfield, and the Yellow Jackets have a really good one-two punch.

Defensively, it’s been a struggle for Georgia Tech.

The Jackets statistically feature one of the worst units in the ACC. If the Hokies can get into a rhythm, it could be another solid day for this Virginia Tech offense.

Linebackers Charlie Thomas and Quez Jackson are playmakers on that side of the ball for the Ramblin’ Wreck, but if Georgia Tech isn’t in sync in the secondary, there are a lot of plays to be made for the Hokies.

It’s all about building on solid performances when an individual, a position group, or in this case, an entire unit had been struggling prior. That’s exactly what Virginia Tech’s offense has run into here.

Virginia Tech’s offense has got to get in a rhythm. The Hokies can’t let that Georgia Tech defense settle in, build confidence and get comfortable.

An opening-drive touchdown would be a nice start for Fuente and company.

Whoever runs the football better is going to win the ballgame.

Coordinator Justin Hamilton will need a big response from his defensive front this weekend. If the Hokies can regain even an inkling of their early-season success, Virginia Tech will give itself a solid chance to keep Georgia Tech off the field while giving the offense chances to put points on the board.

We’re not confident in this one. We’ll admit that.

We’ve picked against Virginia Tech the last two weeks because of the matchup. This week, miraculously, it tends to favor the Hokies.

Virginia Tech will come into Atlanta and take down the Yellow Jackets for the second straight time with Thomas, the hometown kid, speeding past a weak Georgia Tech defense.