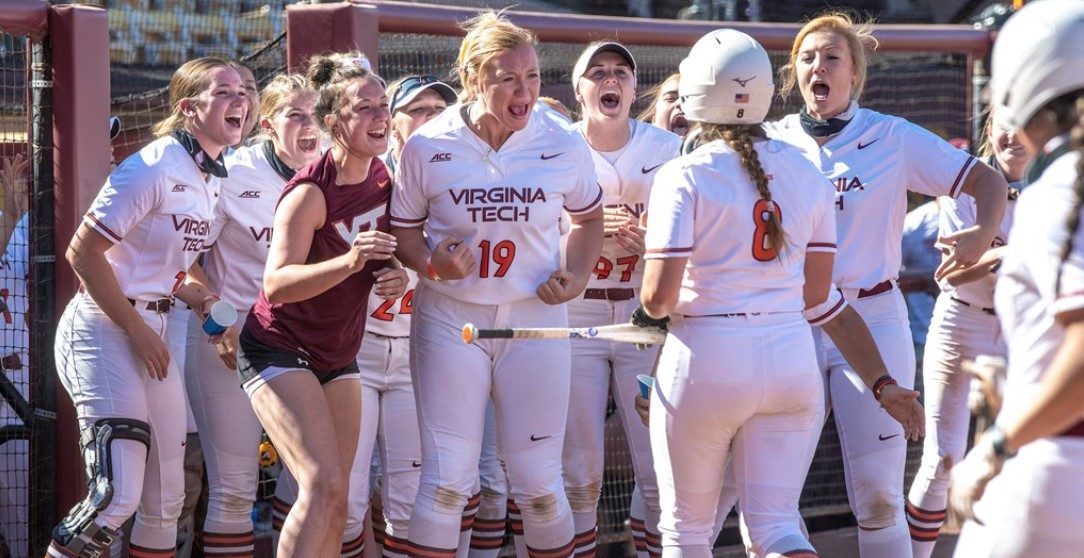 In a 4-part series, we break those down, and tell you which program has the best chance to fill that empty trophy case in Blacksburg. It comes to an end with the Virginia Tech team most likely to win it all.

Unlike wrestling, the NCAA Softball Tournament format absolutely works favorably for Virginia Tech softball to have a chance to win a national championship.

Head coach Pete D’Amour has done an otherworldly job since taking over in Blacksburg prior to the 2019 season. The former Kennesaw State head coach had inherited a program that had gone 23-30 the year prior. He immediately turning them into a 47-11 club. That resulted in him taking home 2019 ACC Coach of the Year honors.

The season culminated in Virginia Tech making its first NCAA Tournament appearance since 2015. It ended a 3-year drought.

After 2020 was axed due to the COVID-19 pandemic, Virginia Tech fans finally got to see what they had anticipated going into 2020. The 2021 season ended with the Hokies a win away from their second ever trip to the Women’s College World Series.

Here’s the fun part: Virginia Tech doesn’t lose one senior from this past year’s Super Regional team. It’ll return one of the nation’s best pitchers in Williamsburg native Keely Rochard. The Hokies also welcome back quite possibly the strongest lineup in the ACC.

If the Hokies and pitching coach Doug Gillis can develop one of D’Amour’s prized pitching prospects into Rochard’s No. 2 going into the 2022 season, Virginia Tech will have a legit shot to compete for the national championship.

Virginia Tech softball isn’t going away either. It’ll take some things to fall into place. If everything goes as planned on the field and on the recruiting trail for D’Amour and the Hokies, they could be hoisting a national championship trophy in the next couple of seasons.