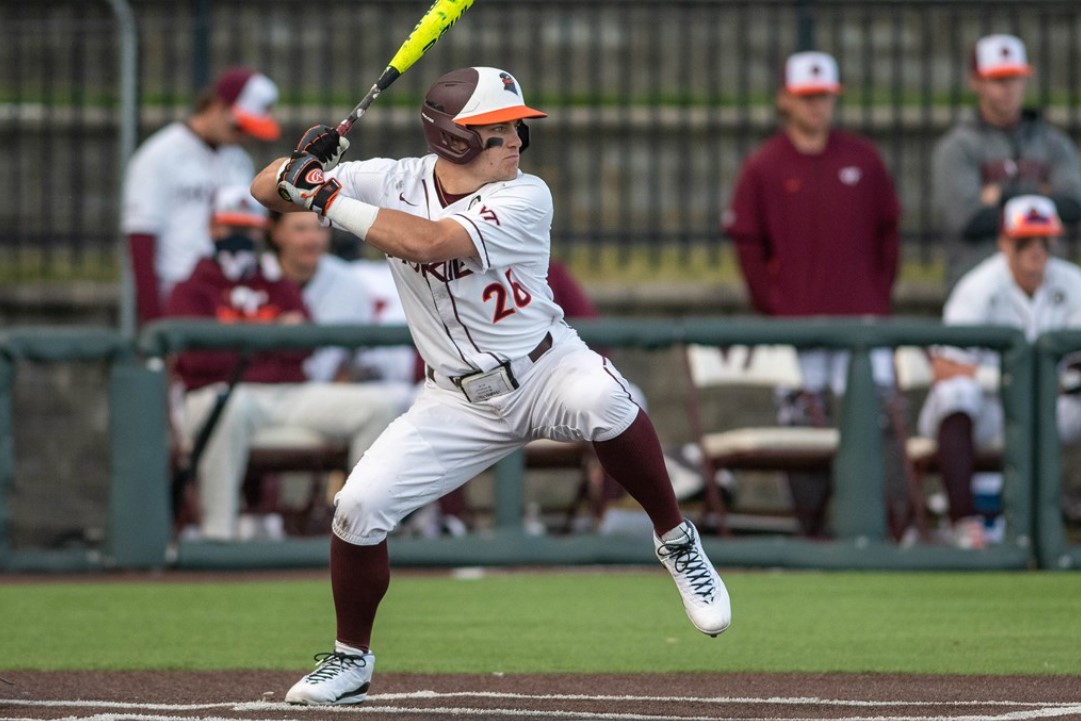 When the Hokies made the trip south to Durham, N.C. last weekend to take on Duke, there was a sense of anticipation. A big opportunity awaited for a struggling team to get back on track.

Instead, the complete opposite happened. They got swept.

Things certainly aren’t getting easier either.

Virginia Tech will wrap up the 2021 regular season with potentially its toughest test yet this season.

Third-ranked and ACC Atlantic division champion Notre Dame (26-10, 22-10 ACC) comes to Blacksburg this weekend, looking to carve up a Hokies team that hasn’t shown much life recently. The Fighting Irish hope to take the ultimate momentum into Charlotte next weekend for what should be a highly-competitive ACC Tournament.

It’s uncharted territory for Virginia Tech this season. The Hokies are now seen as among the “First Five Out” by D1Baseball.com, and the “Next Four Out” by Baseball America. It’s pretty much a must-win series for the Hokies.

Getting swept by a mediocre Duke team last weekend did John Szefc’s ballclub no favors. Virginia Tech dropped to 2-12 in its last 14 ACC contests, and has now fallen under .500 in conference.

Unfortunately, they’ve been rewarded with no run support from a youthful offense. Virginia Tech combined to score just two runs over the Saturday and Sunday setbacks in Durham, falling 4-1 and 2-1, respectively.

The Hokies dropped the first game of the three-game set after an eight-run bottom of the eighth for the Blue Devils. That was the difference in an 11-6 Duke victory.

Offensively, Tanner Schobel was really the lone spark for the Hokies; he’s been hitting in the leadoff hole for Szefc’s team.

The freshman from Williamsburg went a combined 7-for-13 (.538) with two RBIs over the weekend in Durham, as he continues to do a nice job since moving up in the order.

There’s nothing really new from previous weekends, except for the fact that this series may bring the most pressure the Hokies have had on them all year long.

Barring a deep ACC Tournament run in Charlotte next week, this series could make or break Virginia Tech’s postseason hopes. Thought of as a potential NCAA regional host a couple weeks back, Virginia Tech now finds itself on the bubble for the 64-team field.

The only thing that’s changed in the lineup for Virginia Tech, is the presence of Nick Holesa (.412, 0 HR, 5 RBIs) at first base for the Hokies.

The Pennsylvania native had done such a nice job coming off the bench all year long for Virginia Tech, that Szefc penciled him in last weekend for the first time all season. There may be more changes coming to a lineup that’s struggled recently.

Here’s our best guess to how the Hokies will line it up.

What a year it has been in South Bend for second-year head coach Link Jarrett and the Fighting Irish.

Picked last in the ACC Atlantic division preseason, the Irish have rolled through the conference. Notre Dame has already won the Atlantic for the first time in school history.

It won’t even be a competition for who wins ACC Coach of the Year. A team once thought of as one of the worst teams in the ACC, may find itself in Omaha for the 2021 College World Series when all is said and done.

This is no accident either.

That lineup for the Irish is a war zone for pitchers.

Here’s how the Irish may line it up.