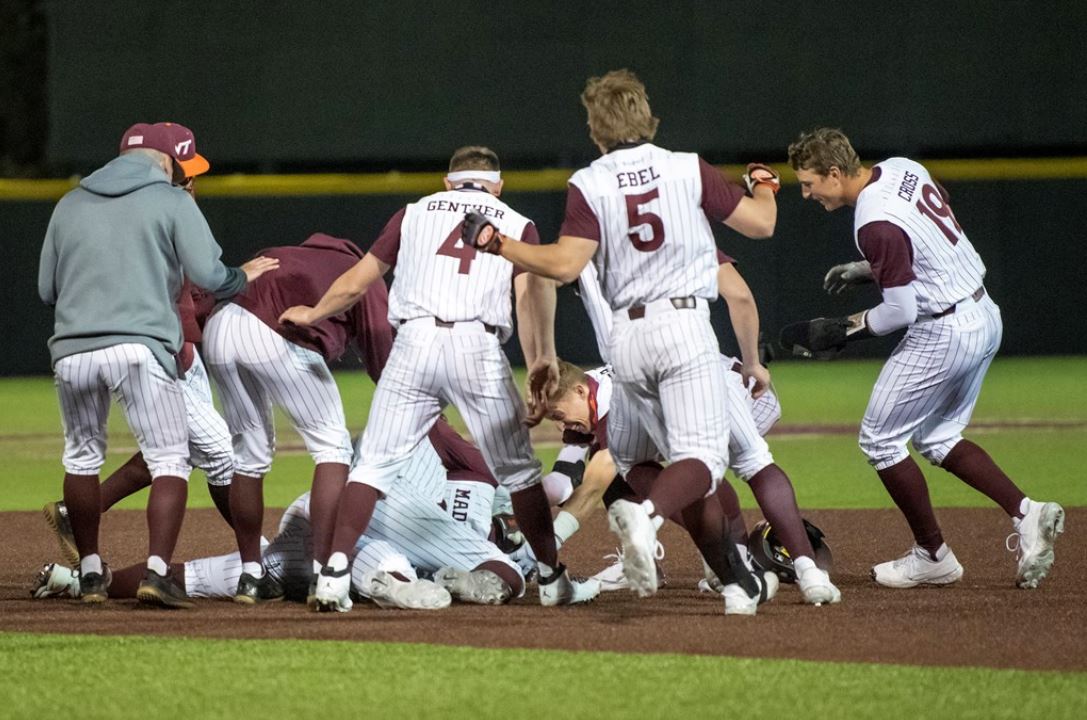 It’s time to officially jump on the Virginia Tech baseball bandwagon, even if it hasn’t already left the station.

It’s early, but the 12th-ranked Hokies are determined to make a run at their first NCAA Tournament berth since 2013. It would be the first under fourth-year head coach John Szefc.

As always though, there’s a new challenge every week when competing in the ACC. This week, it’s one of the more historic programs in the conference – the Florida State Seminoles.

The ‘Noles will come to Blacksburg hoping to spin their season back in the right direction when they face off against Virginia Tech at English Field at Atlantic Union Bank Park.

Let’s start out with this past weekend. Virginia Tech (8-3, 4-2 ACC) took its first-ever series over North Carolina, emerging victorious in the Friday and Saturday match-ups before falling on Sunday.

The iconic “hammer time” home run celebration came out a multitude of times, with Virginia Tech blasting five homers against the Tar Heels that led to the enthusiastic celebration to go viral on many different platforms.

Two true freshmen in Jack Hurley and Tanner Schobel actually were the two that added multi-homer weekends for the Hokies. Hurley’s blast tied the Sunday match-up after Virginia Tech fell behind early, 4-0.

“Over the years, I’ve had a lot of good guys but I mean from a tools perspective, he’s going to be very, very good,” Szefc said of Hurley. “I think when he can kind of relax and slow things down a little bit and we can just relax and operate, which he does a good job of that most of the time, but I think if he gets better at doing that, I think that then the true freshmen tandem of Hurley and Schobel will be very fun to watch as time goes on — if they aren’t already.”

Both guys are already making an impact just a month into their college career. It’s especially impressive considering their senior seasons of high school were axed after the COVID-19 outbreak.

Szefc said that he believes Hurley is “just scratching the surface.”

Hurley agreed, but acknowledged that he still has a long way to go.

The students in Blacksburg were hungry to show up as well. It was the first athletic event where the university was able to sell tickets since last March, and the outcome did not disappoint.

Szefc described the crowd as “the best I’ve seen since I’ve been here.” The “Dugout Degenerates” came out in full force, trying to squeak their way under the skin of the Tar Heels.

They showed up again during a mini two-game series this past Tuesday and Wednesday. The Hokies split the series with Virginia Commonwealth – a consistent regional contender out of the Atlantic 10.

Now, the focus turns to Florida State. Virginia Tech will try to pull off its third straight ACC series victory when the ‘Noles come to town.

It’s nothing new for Virginia Tech.

The impact of TJ Rumfield, Gavin Cross, and Kevin Madden in the middle of the Hokies’ lineup has been outstanding. Madden played the role of hero with a walk-off single in the Hokies’ 10-9 win over VCU on Tuesday. Add Schobel and Hurley into that mix, and Virginia Tech has quite possibly its best lineup since 2013 when the Hokies hosted an NCAA Regional.

The back end bullpen duo of Jaison Heard and Shane Connolly also has been tremendous for the Hokies. Neither has allowed an earned run all season long.

Meanwhile, Cade Hunter has been a force with the long ball, hitting a couple mammoth home runs against both Miami and North Carolina.

It would be nice to get a little more length out of the weekend rotation of Peyton Alford, Chris Gerard, and Anthony Simonelli, but that’s something that can be worked out.

It also wouldn’t be a shock to see Szefc slot in the hot-hitting Lucas Donlon at second base while Schobel moves to shortstop to replace the struggling Fritz Genther.

Here’s how Virginia Tech will project to shake out this weekend.

The Seminoles (4-5, 2-4 ACC) have not had the start to the season that they would’ve liked to.

After initially taking two of three from North Florida to start the season, Florida State was disappointingly swept at home by Pittsburgh, who was picked to finish seventh in the ACC Coastal.

They followed that up though with a nice bounce-back series victory over Virginia in Tallahassee. In that series, FSU was carried by its elite starting rotation in ACC Pitcher of the Week Parker Messick, Bryce Hubbart, and Conor Grady. Head coach Mike Martin Jr. hopes those three guys can carry the ‘Noles to another big series victory up in Blacksburg.

Here’s how Florida State projects to line up.