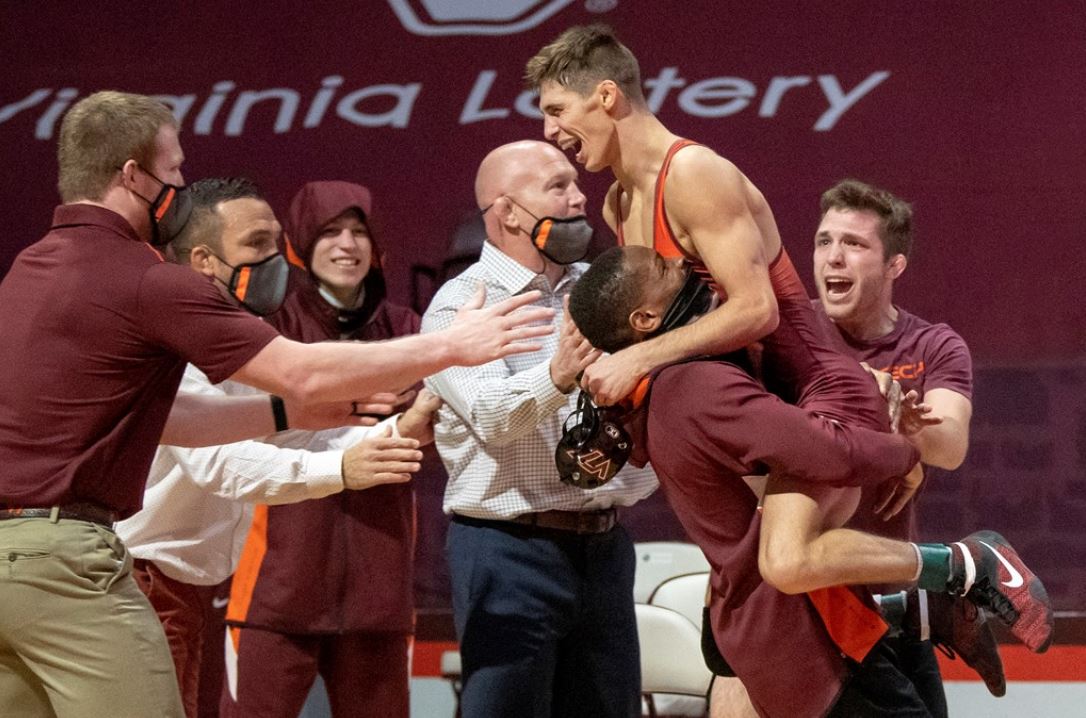 It was quite the weekend for Virginia Tech wrestling.

The eighth-ranked Hokies pulled off a 17-16 upset victory over third-ranked NC State. It was a dual meet they’ll be talking about for years to come in Blacksburg.

With the victory, Virginia Tech clinched at least a share of the ACC regular season championship, and can secure that title outright with a victory over No. 15 Pittsburgh on Friday night at Cassell Coliseum.

The win for the Hokies was huge — no doubt about it. But the highlight of the dual, was the mystifying finish that gave Virginia Tech the last second victory – literally.

One doesn’t typically see finishes that close in wrestling to decide who won the dual. It may happen for an individual match, but not for the entire meet.

Who was the hero for the Hokies? Sam Latona, the nation’s No. 8 wrestler at the 125 weight class. Latona defeated fourth-ranked Jakob Camacho, 7-4, with a near fall in the final seconds of their match to pull off the upset for the Hokies.

To backtrack, the Hokies and Wolfpack have been the powerhouses in ACC wrestling recently. This year was no different. In a match that likely has decided the ACC regular season champion, with two top-8 teams duking it out on the mat, it certainly didn’t disappoint.

Connor Brady (4-4) then avoided a major in the hands of second-ranked Hayden Hidlay of NC State at 157 to keep the advantage with the Hokies. Top-ranked Mekhi Lewis (8-0) handed it to No. 15 Thomas Bullard, 5-0, and No. 7 Daniel Bullard of NC State got a late takedown to major ACC Wrestler of the Week, Dakota Howard (1-4), to make it a 10-10 deadlock.

The fun just gets started. Second-ranked Hunter Bolen (7-0) for the Hokies edged out fourth-ranked Trent Hidlay in a thriller, 2-1, to give Virginia Tech the 13-10 advantage, but two straight wins by NC State wrestlers put the Wolfpack up 16-13 and in a great position heading into the final match.

The Hokies were lucky to be that close. No. 17 John Borst (4-1) refused to forfeit after looking like he suffered a serious arm injury, taking one for the team and wrestling the rest of the match one-armed to avoid the forfeit and keep Virginia Tech within striking distance.

A One To Remember

Then came the match that lit up the college wrestling world Friday night.

Eighth-ranked Latona (7-0) and No. 4 Camacho at the 125 weight class was all that was left to decide the match.

The path was clear for the Wolfpack — win the match, win the dual. For the Hokies on the other hand, not only did Latona have the tall task of taking down Camacho. He needed to win by at least three for Virginia Tech to win the dual. No one knew that at the time though, it was just time to wrestle.

Latona trailed most of the match. Down 4-3 with less than 15 seconds left, he knew what he had to do.

“I knew I had to go,” the redshirt freshman emphasized. “I think I looked up at the clock at one point and it was at one minute, and then looked up again and it was 45 seconds. (I) knew it was go-time – I had to start my final sprint.”

Latona then began to go after Camacho, who had begun retreating, as he had been the entire match. Having to stay toward the center to avoid a second stalling call that would’ve tied the match, Latona attacked.

“I was like, ‘I’m not going to lose this match’. I kind of got in that shot and he kind of dove under,” Latona said.

Latona then recorded a takedown over Camacho with less than two seconds remaining to put him up 5-4, and a near fall gave the Alabama native two more points to give him a 7-4 victory – something that was very crucial.

“It Makes It Even That Much More Crazy”

The crazy part was that if he had he just got the takedown, and no near fall, the Hokies would’ve lost the dual. Latona’s win made it 16-16, and a tiebreaker that fell under the third criteria after the first two were dead even as well. That was what gave Virginia Tech the win with 49 overall match points to NC State’s 48. That’s how close it was.

Latona didn’t realize he needed the back points, or even got them. Thinking all he had to do was win the match, Latona prematurely celebrated the Hokies victory.

He admitted that it was about two hours later that his dad had to tell him he got the back points and that’s what won the dual.

“It makes it even that much more crazy,” he added.

Latona went on to say this was the highlight of his career. But his favorite part was “jumping into Mekhi (Lewis’) arms.”

“Everyone crowded around me and we went to the locker room and just started screaming and yelling,” Latona continued. “I think that’s the most cardio I’ve gotten all season.”

“That was probably the most exciting (ending of a dual meet) I’ve ever been a part of,” Robie said. “The fact that not only the ending of 125 determined the outcome of that individual match, but then it also won the dual in criteria for us with the two back points.”

Robie then took it a step further.

“Those circumstances almost never happen in wrestling, and for everything to come together like that is simply unique.”

The fourth-year head coach then went on to say he doesn’t believe many knew the implications of the two back points on the outcome of the dual.

Bolen said he had “been in some good ones” but that one certainly topped his list especially with it ending with defeating NC State for the first time since 2017.

Myers said he was relieved that after letting his opponent Trombley up for an escape with six seconds left in his match, it didn’t cost Tech the dual meet. He then went onto express similar excitement like everyone else we had talked to had.

“It was just insane; I knew Sam (Latona) had to beat him by two to give us a chance,” Myers said. “I knew he could beat him individually, but I didn’t know towards the end if he was going to get there (the two points) to win.”

Myers then took us through exactly what he saw the moment the Hokies won the dual.

“I just see Camacho dive under and the ref starts swiping, I jumped so high in the air I could’ve ducked,” he said. “I was freaking out, I almost started crying; the coaches were on the verge of tears.”

The Edinboro transfer then finished it off saying that it was “an awesome feeling. It was great to share with the guys, it was just awesome.”

What a win for Virginia Tech.

The Hokies look to clinch the ACC regular season championship outright this Friday when they host No. 15 Pittsburgh at 6 p.m. ET on the ACC Network.