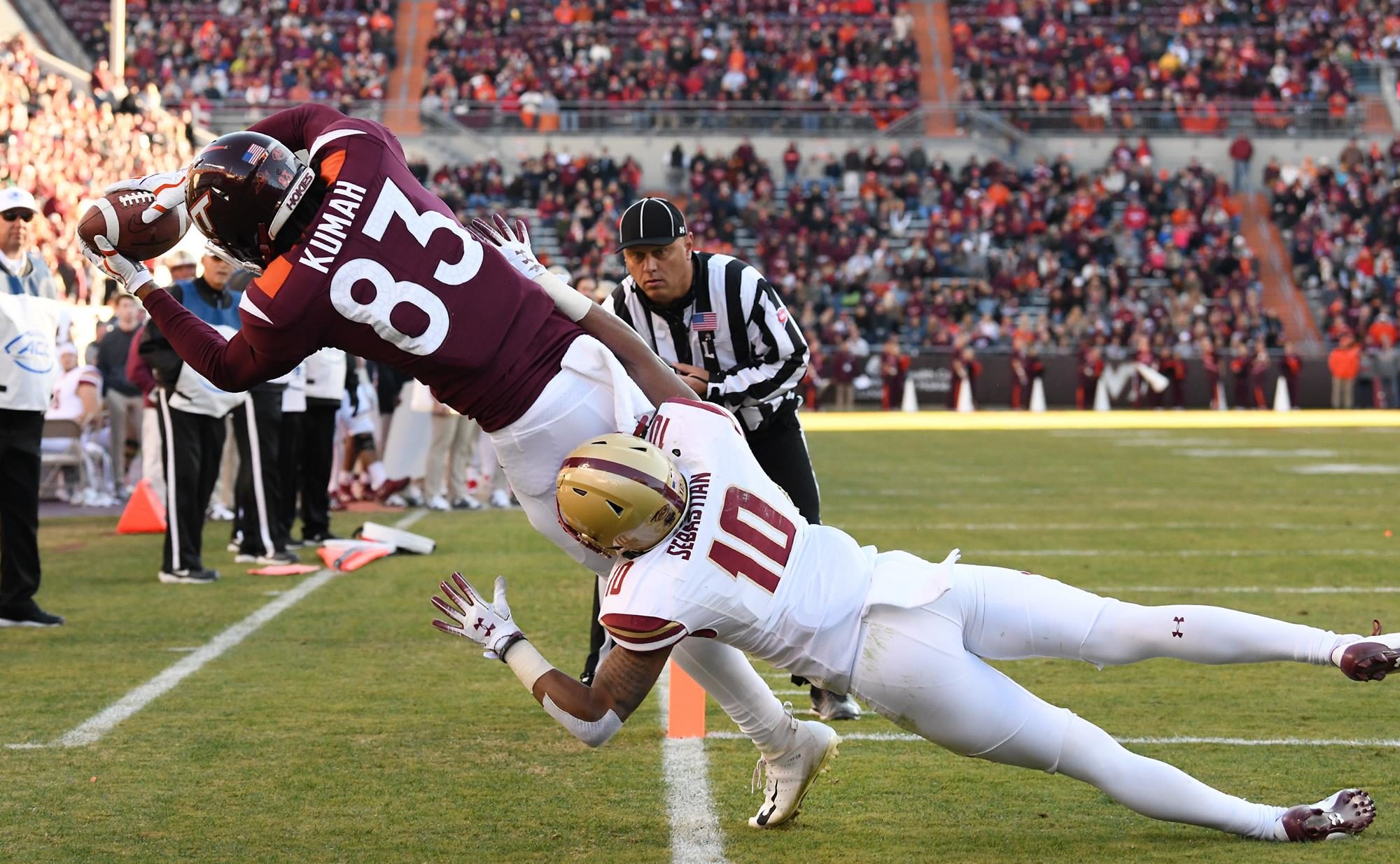 The 6-foot-3, 223-pounder, starred at receiver for the Hokies between the 2016 and 2018 seasons. Kumah recorded nine touchdowns during his Hokies’ career, and was Virginia Tech’s second-leading receiver in 2018. That year, he caught 42 passes for 559 yards.

After the 2018 season, Kumah decided to transfer across the state to the 757, joining Old Dominion. With the Monarchs, Kumah hoped to prove himself against the best in Conference USA. Unfortunately after battling a knee injury, Kumah missed the majority of his senior year in 2019, but played right at the minimum four games in order to qualify for a redshirt year.

The Manassas, Va. native was granted a fifth year by the NCAA for the 2020 season. However, due to the COVID-19 pandemic, ODU cancelled its football season, subsequently ending Kumah’s college career only having played in four games for the Monarchs.

He could’ve opted to return to Norfolk for a sixth year as a result of the NCAA granting each fall sports athlete an extra year of eligibility. But instead, Kumah chose to go ahead and take his talents to the NFL after receiving both an undergrad and a master’s degree.

During the quarantine period, we had the chance to catch up with Kumah. He reflected on his college career, explained his decision to transfer, and talked about his return to Lane Stadium on the visiting sideline.

Although recruited by legendary head coach Frank Beamer, Kumah entered his freshman season at Virginia Tech during Justin Fuente’s first year at the helm. Little did Kumah know during the recruiting process, that he would become a top target for the then-Memphis head football coach.

“It was fun; I really enjoyed every bit of my three years there at Tech,” Kumah said over a Zoom call. “I learned a lot of things, met a lot of great people, and developed a lot of great relationships that will last a lifetime.”

He then pointed out the mantra many student-athletes go by today — “books over ball”.

“I was most importantly able to leave with a degree,” he made sure to point out. “I really liked Virginia Tech (and) I had a whole lot of fun.”

Kumah then went on to explain why he ended up leaving the Hokies.

“I just knew my time was up there,” Kumah explain. “That’s what I felt and that’s what my family felt.”

When asked what he missed most about his time in Blacksburg, he quickly responded “the game day atmosphere.”

He then entered his name into the transfer portal, not knowing what was to become of his career post-Virginia Tech.

Time For A Change

On April 7, 2019, Kumah then made the call to uproot from Blacksburg over to Norfolk. That day, he pledged his services to the Monarchs.

“Once I graduated from Tech with a degree in property management, I knew I wanted to go somewhere where I could really pursue a master´s degree,” he said. “ODU had a master’s program I was really interested in. It was close to home. So it seemed like a perfect fit.”

Then-head coach Bobby Wilder had to be ecstatic about securing Kumah’s services. Kumah had been pursued by Penn State, Louisville, Notre Dame, and others. Kumah now turned his attention to becoming a star wide receiver in Norfolk for ODU.

An intriguing part of Kumah’s move to ODU came in the form of his return to Blacksburg. In Week 2 of the 2019 season, Kumah the Monarch visited his former team — the Virginia Tech Hokies.

On Sept. 7, the Monarchs made the trip up to Blacksburg to play the Hokies at Lane Stadium. Kumah had returned to Blacksburg — this time as a visiting player. After being on the wrong end of an historic upset the year prior when Old Dominion stunned Virginia Tech 49-35, Kumah was now trying to make it two straight wins for ODU over the Hokies.

“Honestly, I think I will probably remember that game for the rest of my life,” he said. “Just because when I came back, I just felt like I was back at home again.”

The efforts of Kumah and his teammates were valiant. Kumah tied a team-high with three catches, totaling 24 yards. The Monarchs trimmed what was a 21-point deficit down to seven before falling, 31-17.

A Warm Welcome Back

The crowd that had once cheered Kumah on left satisfied as the wide receiver was on the losing end of the in-state showdown for the second year in a row. It was a crowd that Kumah remembered well.

“I knew exactly what to expect when it came to the game day atmosphere,” he said.

Hokie fans showed no warm welcome back for Kumah. Boos rained down every time his name would echo over the sound system.

“As far as the booing goes, I knew it was all love,” Kumah recalled, laughing. “At the end of the day, they’re there to support Tech and I was on the opposite team.”

His favorite memory about the day however, had nothing to do with the game itself.

“Seeing all my former teammates and coaches is what was really special about the day,” he said. “It’s something I’ll never forget.”

Time To Get Paid

Despite playing in just four games over the last two seasons, Kumah has turned his attention to the 2021 NFL Draft. Some scouts see him as one of the top receivers at the Group of 5 level. Kumah hopes to show the potential to be a late-round draft pick.

What becomes of his football future remains to be seen, but it’s fair to say Kumah will represent Virginia Tech — and Old Dominion — well at the next level. That’s regardless of whether the next level is on a football field or anywhere else. Holding his degrees high and proud, Kumah still plans to make football his first profession.