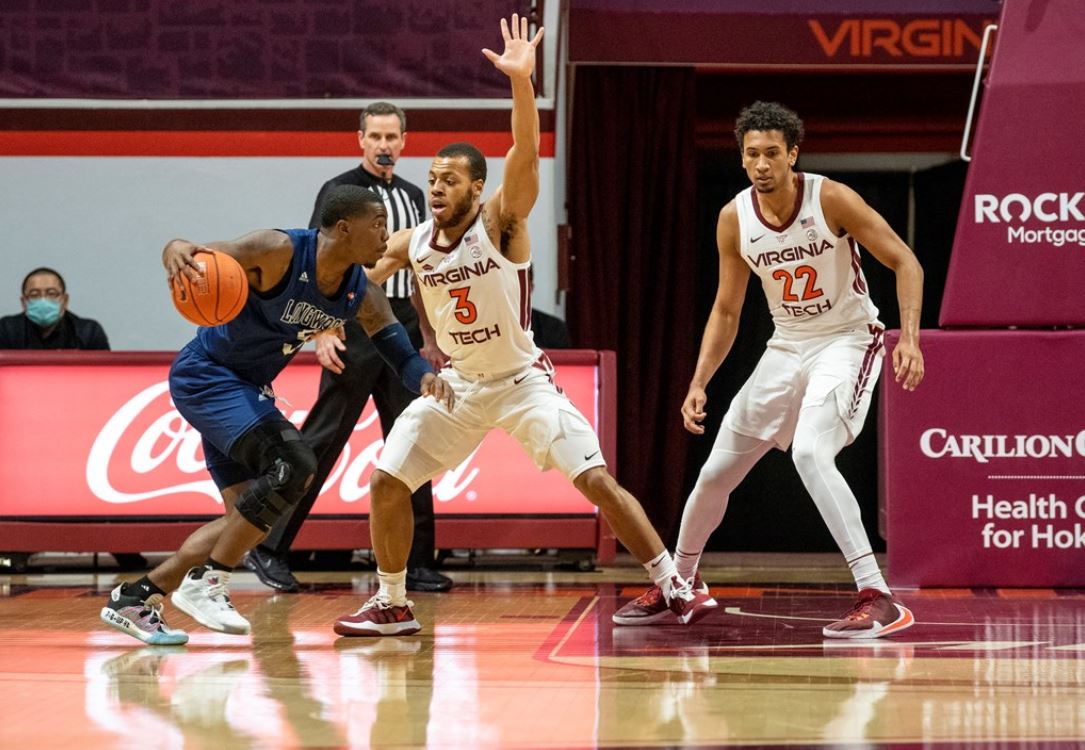 Virginia Tech’s 2020 non-conference slate is behind it, and the 24th-ranked Hokies are now preparing for the ACC grind. They’ll enter the start of conference play 1-0 after an early win over Clemson.

They’ll start out their full conference slate at home this evening at Cassell Coliseum. The Miami Hurricanes will come into Blacksburg looking to make a statement after an underwhelming start in South Beach.

The one thing that stands out where Virginia Tech has a major advantage over Miami in this one, is its depth. The Hokies have playmakers, and plenty of them.

In the 84-58 win over Longwood last week, Virginia Tech’s way-too-early MVP Keve Aluma scored in double figures yet again. But in a rare turn of events, he actually wasn’t the Hokies’ leading scorer. Jalen Cone was. Cone led the team with 18 points in just 20 minutes of play.

Cone has gotten off to a slow start in this young season, as arguably the Hokies’ best shooter has missed time due to a foot injury, but he finally seemed to hit his groove pre-Christmas. The sophomore guard reignited his confidence as he was nearly perfect from beyond the arc.

Virginia Tech just has a lot of guys who can score too. The Hokies have four guys currently averaging double figures in Aluma, Cone, Tyrece Radford, and Naheim Alleyne.

But they also have plenty of other guys just as capable of putting up those numbers on a given night. Hunter Cattoor and Justyn Mutts can score the rock, as can Joe Bamisile, who put up 11 points in just five minutes against the Lancers.

There’s still no word whether or not Kansas State transfer Cartier Diarra will be back for this one. Diarra opted out of the season “for the moment” prior to the Clemson game. John Oijako is eyeing a return from a knee injury, and whenever he’s ready to go, he’ll add quite the post presence for Virginia Tech.

On Tuesday night, Virginia Tech must avoid sluggish starts, sloppy turnovers, and limit Miami’s scoring abilities. Do that and the Hokies have the tools to pick up this win.

Bitten By The Injury Bug

It’s safe to say the ‘Canes haven’t had the best start after being picked to finish seventh in the ACC, but a lot of that has to do with injuries.

Miami started the year 3-0 before star point guard Chris Lykes went down with an ankle injury. Since then, the Hurricanes have been upset by Florida Gulf Coast, got blown out by Pittsburgh, and survived a scare against Jacksonville.

It’s unclear whether or not Lykes will play in this one. Miami has been fairly quiet on when he may come back. Another notable guard in Kameron McGusty is also questionable for this one after he missed the last two games with a hamstring issue.

Isaiah Wong, who leads the team averaging 19 points, and Anthony Walker can help out if those two aren’t present. But the task will be tough for the Hurricanes to get it done on the road without two of their top three players.

Miami did beat Virginia Tech without Chris Lykes last year. But unfortunately for the ‘Canes, history will not repeat itself.

The depth of the Hokies will wear down Miami, and after a tight first half, Virginia Tech will pull away to move to 8-1 overall and 2-0 in conference play.

Grab your popcorn, folks. That one is going to be fun.