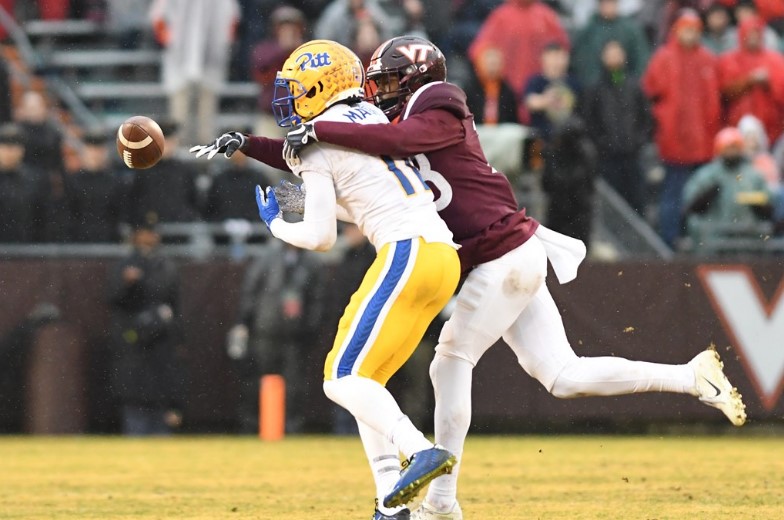 When the fans talked about Virginia Tech and Pittsburgh being a pretty even match-up in 2020, this isn’t exactly what they expected.

The Hokies and Panthers are both 4-4 in what have been pretty underwhelming seasons for the typical Coastal foes.

This’ll be a season-changing game for both programs, and it’ll kick off from a chilly Heinz Field this afternoon.

Another Battle In The Den

After another crushing defeat last weekend to the ninth-ranked Miami Hurricanes, the Virginia Tech Hokies are in need of a win badly. That won’t come easy, as the Hokies and Panthers have had quite the showdowns the last couple of seasons.

Virginia Tech defeated Pitt 20-14 back in 2017 after four straight stops at the 1-yard-line to win the game. The Panthers then answered the following year, running for just under 500 yards, and defeating the Hokies by a final score of 52-22 on a snowy Pittsburgh evening.

The game last year was the complete opposite. Pittsburgh only crossed midfield once in Bud Foster’s home finale as the defensive coordinator at Virginia Tech, as the Hokies annihilated the Pitt Panthers, handing out a 28-0 doughnut.

This year should be another fun one, as both teams possess talented quarterbacks in Kenny Pickett and Hendon Hooker. Both will be extremely hungry to carry their team to a much needed victory this afternoon.

The most frustrating part for Virginia Tech fans in the Hokies’ loss to Miami was they actually did a whole lot right.

Hooker played another solid game under center, going 19-for-29 with 202 yards, while running for an additional 59 yards and a touchdown. Star running back Khalil Herbert was limited because of a hamstring injury, but the trio of himself, Raheem Blackshear, and Jalen Holston was menacing for the Miami defense. Holston added two touchdowns on the ground for the Hokies. It was Holston’s first breakout game after missing all of 2019 with a broken ankle.

It also did a decent job stopping the run, holding Miami to only 131 rushing yards. If the Hokies play the run defense like they did last weekend, they’ll easily win this game at Heinz Field.

This Pitt team doesn’t boast a running back like James Conner or Darrin Hall like in years past. Vincent Hall will need to gash this Hokie defense this afternoon in order to pick up a big conference win.

For the first time this season, both Virginia Tech and the Pitt Panthers will be required to wear masks on their person at all times, but not while participating in competition. This comes after a COVID-19 outbreak within the Pitt program, and an overall spike of cases in Pennsylvania.

The Panthers’ game last week against Georgia Tech was postponed. The state restrictions will require Pittsburgh to wear masks on the field this afternoon, and Virginia Tech will follow suit to take the necessary precautions to play this football game.

It’ll be interesting to see if that has any affect on the game, but whatever we can do to get the game in, needs to be done.

Panthers On The Prowl

Searching for a win, sixth-year head coach Pat Narduzzi needs this one badly to win back the fan base.

This Pittsburgh running game shouldn’t run all over the Hokies defense like it did in years past, but Pickett will be the guy to watch if you’re a Virginia Tech fan. The senior signal caller has had an underwhelming season for the Panthers, and will be the guy that needs to get it done in a heavy passing Pitt team.

The problem is, who is he throwing it to? That’s been a wild card this whole season, but freshman Jordan Addison is a guy to watch out for. The explosive rookie has been Pitt’s leading receiver this season.

Defensively, that’s where the Panthers live.

Defensive ends Patrick Jones and Rashad Weaver are NFL bodies up front, and could cause havoc for the Hokies offensive line and Hooker.

Star safety Paris Ford did opt out earlier this season to begin preparing for the 2021 NFL Draft, but redshirt freshman Brandon Hill has been filling in the spot nicely. He will come in hard hitting on Herbert and the Hokies run game.

Damar Hamlin is also a guy in the secondary Hokie fans should look out for all afternoon long. He’ll likely be matched up with either Tre Turner or Tayvion Robinson throughout the contest.

This is strength on strength. Running back Khalil Herbert is second in the ACC in rushing yards this season, but Pitt’s defense counters that with the second-best run defense in the country, and guys like Jones and Weaver will be after Herbert all game.

If Virginia Tech can find a way to run the ball efficiently in this one, they’ll walk out of the Steel City pretty happy with the result.

Another way the Hokies can get a significant advantage in this one, is by making Pickett uncomfortable in the pocket. For a team that’s as pass happy as Pittsburgh, making Pickett get the ball out quickly will be crucial for Virginia Tech.

It’ll be a tall task getting through. Star offensive lineman Jimmy Morrissey is outstanding, but if the Hokies can apply pressure, it’ll be a rough afternoon for Pickett and the Pittsburgh offense.

As well as the defense played last week against Miami, they didn’t turn the ‘Canes over. If the Hokies can steal some possessions, and control the clock throughout the game, Virginia Tech will have a major leg up to limit the Pitt possessions.

This just feels like a game Virginia Tech finds a way. It’ll be extremely interesting to watch the Hokies run game vs. the Panther defensive front, but assuming Herbert is healthy, we think the Hokies may have a leg up.

Not to mention Virginia Tech also has guys to throw to like Turner, Robinson, and James Mitchell, when healthy. With Ford opting out for the Panthers, the Hokies have a major leg up against that secondary.

Virginia Tech will do enough offensively against Pitt’s defense, and the ‘Lunch Pail D” will shut down the Pitt running game to snap a 2-game losing streak and leave town with a “W.”