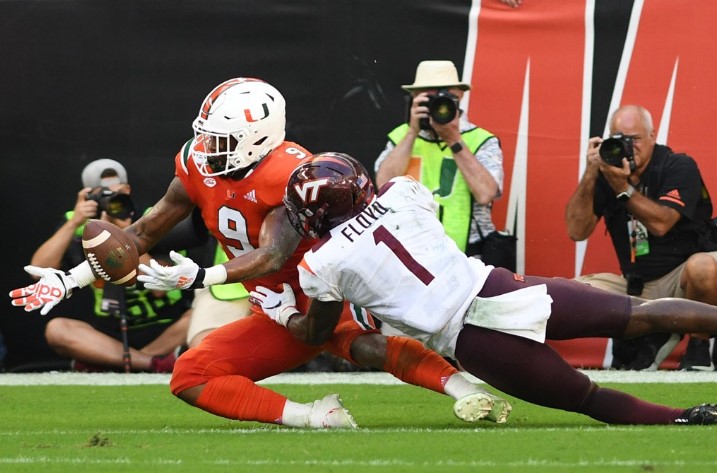 It’s bounce back time for the Virginia Tech Hokies.

After dropping a tough one to No. 25 Liberty inside Lane Stadium in brutal fashion, the Hokies will try again at home this afternoon against the ninth-ranked Miami Hurricanes.

Eye Of The Storm

It is a crisp, chilly November day in Blacksburg. The Hurricanes will come into Lane Stadium on this perfect November football day coming off a comeback 44-41 win at NC State last Friday night.

The Hokies however, don’t come in on a high note. Virginia Tech dropped a 38-35 dud last weekend against now 22nd-ranked Liberty, losing in the final seconds on a 51-yard field goal by the Flames.

Head coach Justin Fuente and the Hokies haven’t felt this bad about themselves since last year’s abysmal 45-10 home defeat against Duke. Following that loss however, Virginia Tech responded well going on the road by defeating, oh who? You guessed it — the Miami Hurricanes.

This isn’t the brightest time to be a Virginia Tech fan, but the Hokies will look to shine a light this weekend. They hope to bounce back by defeating a top-10 Miami team at Lane Stadium.

Old Dominion, Duke, and now Liberty. The inconsistency level for Virginia Tech football is at an all-time high, and it’s concerning. The good news though for the Hokies, is that Fuente and Virginia Tech historically bounce back after a bad loss.

This week will need to be the same result if the Hokies want to save a season some say is spiraling out of control. They have the pieces to do it, but they’ll all need to have big games this week to knock off the No. 9 Hurricanes.

Let’s start with Hendon Hooker. The Virginia Tech quarterback has been fantastic the last two weeks. The redshirt sophomore followed up a perfect 10-for-10 game at Louisville by going 20-for-27 passing with 217 yards and three touchdowns through the air in the loss last week. Hooker added 156 yards and a touchdown on the ground.

The Hokies’ run game will also nned to be a lot better with Khalil Herbert holding the ball. The Kansas transfer is questionable after leaving last week’s game against Liberty when he suffered a hamstring injury on the opening kickoff.

If not available, Virginia Tech’s run game certainly has the guys to fill the void. It helps matters with a guy like Raheem Blackshear to step in and get some carries. Jalen Holston will also get plenty of carries; he provides a speedy third option for the Virginia Tech run game.

Virginia Tech also has a big receiving threat questionable this week for the Hokies. Star tight end James Mitchell didn’t play a snap last week against Liberty, and the Hokies are hopeful he can return for this one. If unable, Nick Gallo and Drake Delulis will likely fill the void left by Mitchell. Gallo hauled in his first career touchdown last Saturday.

Oh yes, another Hokie star is in question for Saturday’s match-up. Linebacker Rayshard Ashby left last week’s game against the Flames, and his status is up in the air for whether or not he’ll be able to suit up against the ‘Canes.

This one would be quite the hit for Virginia Tech. While Ashby hasn’t had the most fantastic year, the drop-off from the Chesterfield, VA native is quite a big one. For an already struggling linebacker unit in Blacksburg, they’ll need all the help they can get to stop Miami quarterback D’Eriq King. Ashby being unable to go would serve as a major blow.

Houston transfer D’Eriq King has been spectacular so far this season for the 6-1 Hurricanes. The most scary thing about him for the Hokies, is that the Manvel, TX native continues to get better game in and game out.

King went 31-for-41, throwing for 430 yards and five touchdowns in Miami’s impressive win in Raleigh last week. He’ll be a problem all day for the Virginia Tech defense.

All three can cause fits for the Hokie defense who has struggled mightily against the run this season. Jordan is the star, but missed last week’s contest at NC State. Expect to see a lot of Harris and King running the ball this afternoon.

Defensively, Miami is big and strong up front. The ‘Canes are led by Jared Harrison-Hunte on the line, while also boasting Temple transfer Quincy Roche and Jaelan Phillips to hold down the fort behind the big men.

Virginia Tech will have to stop the run to win this football game, plain and simple. While Harris and King will inevitably have a big play or two, limiting that and slowing the Hurricane offense down to a Category 1 will be crucial for the Hokies.

They’ll either have to do this, or score on practically every possession to win this afternoon.

We saw what happened at Louisville, and we saw what happened against Wake Forest and Liberty. It seems like a common theme when the Hokies are off to a fast start, they close the deal. Virginia Tech got off to a 28-0 start last year in South Florida against Miami, and boy, would they sure love that again this year.

The Hokies are 3-0 this season when they strike first, and a fast start against the powerhouse Hurricanes would be a recipe for success for Fuente and company.

Not only does Virginia Tech need to punch it in when it gets down inside the 20, but keeping Miami out of the end zone will be a must if the Hokies are going to win.

Virginia Tech’s defense has typically allowed a touchdown this season when the opposing team gets in the red zone, and this will need to be the week Virginia Tech turns it around if it is to pick off the Hurricanes at home.

The Hokies always seem to bounce back after a tough loss or upset defeat the week prior. This seems like the perfect week for Miami to go down after some close calls against Virginia and NC State the last few weeks. So is Virginia Tech going to do it and take down No. 9?

The fact that Virginia Tech is slightly favored in this one makes it sort of lose the edge of a bounce-back week against a ranked foe.

King and the Miami offense are going to be too much for that Virginia Tech defensive front, and the question marks for the Hokies just seem to be too blatant to pick them. The ‘Canes will pull this one out late, downing Virginia Tech in Blacksburg this afternoon in a close one.