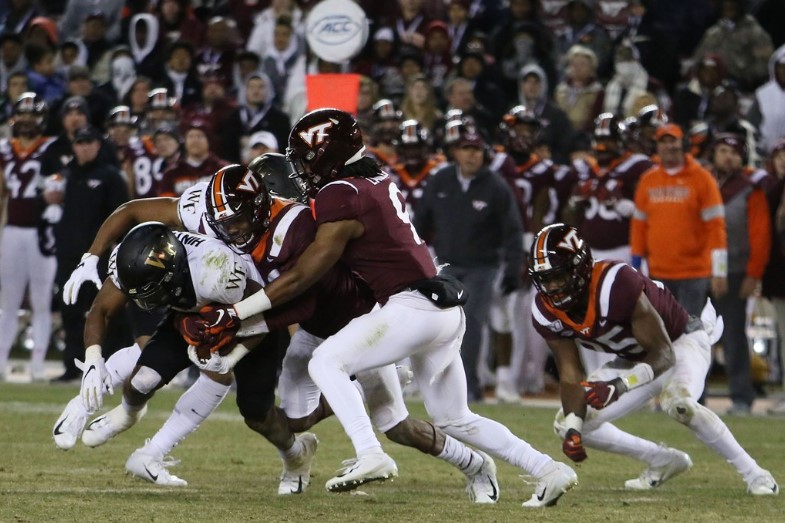 After Virginia Tech got back on track last weekend with a big home 40-14 win over Boston College Eagles, the 19th-ranked Hokies now make the trip south to Truist Field in Winston-Salem to face the Wake Forest Demon Deacons.

The Hokies will look to keep some positive momentum this Saturday in Winston-Salem. Both schools are coming off of impressive wins in their home stadiums, and will each look to continue that momentum in order to point their seasons in the right direction.

The Demon Deacons are coming off a statement 40-23 win against Virginia, poising Wake Forest to knock off both Virginia schools in back-to-back weeks at home. The Deacs are led by seventh-year head coach Dave Clawson, who has done an outstanding job during his tenure in Winston-Salem.

After the Hokies’ big win against BC at home last weekend, head coach Justin Fuente’s team will look to pick up a solid road win against the Demon Deacons. Currently 3-1, Virginia Tech has three winnable games the next three weeks, beginning this afternoon.

With that, let’s get you ready for game day. It’s time for your official game day preview as the Hokies travel to Wake Forest at 3:30 p.m. ET on Raycom Sports Network.

The Hendon Hooker show was on full display last Saturday against BC. The way the Greensboro, NC native played last Saturday, it doesn’t seem like Hooker is showing any signs of slowing down. Hooker is poised for a big game back home in the Tri Cities, but it will be tough to back up his numbers from last week.

Hooker put up solid passing numbers, completing 11-for-15 with 111 yards and a touchdown. The kicker for Hokie fans though, is Hooker’s run game. The quarterback actually was Virginia Tech’s leading rusher this past week, barely edging out Khalil Herbet by putting up 164 yards and three touchdowns.

As pieces and pieces finally are finishing trickling in, Virginia Tech finally is able to exhale about the defense.

Divine Deablo returning at safety has been huge for Virginia Tech, and getting guys at cornerback like Brion Murray and potentially Jermaine Waller makes the Hokie secondary extremely talented. Unlikely names Dorian Strong and Devin Taylor have stepped up big in the trio’s absence. Now with that trio back, Fuente has to feel good about his secondary depth heading into the middle part of the season.

Dave Clawson and the Wake Forest Demon Deacons had a fantastic 2019 campaign, cracking the top 25 multiple times throughout the season. This isn’t last year’s firepower pass-efficient offense though.

Out goes Jamie Newman, in comes Sam Hartman, and all of a sudden the Demon Deacons are a run-strengthened team. Running back Kenneth Walker III has been tremendous for the Deacs this season, totaling 383 yards and seven touchdowns through the first four games of the season.

This will be an interesting match-up for Virginia Tech’s defense, as the Hokies struggled to stop the run in their loss to North Carolina. Linebackers Dax Hollifield, Alan Tisdale, and Rayshard Ashby will have to follow up their big game against Boston College last weekend. The group will need to sniff out the Wake run, stopping Walker and Christian Bale-Smith when running up the middle.

We’re just stating the obvious, but Virginia Tech is a dang good rushing team. The triple threat of Heisman hopeful Herbert, Blackshear, and Hooker all provide options for the Hokies against an OK Wake run defense.

Virginia Tech will look to gash the Demon Deacons up the middle all afternoon long and wear down the run defense headlined by Roanoke native Carlos Basham Jr. If they do that, the Hokies will cruise easily to a big win in Winston-Salem.

If you are on Virginia Tech and are named either Justus Reed, Emmanuel Belmar, Amare Barno, Jarrod Hewitt, or Norell Pollard, you’re rushing the quarterback this afternoon. Hartman has already been sacked 14 times this season, as the offensive line for the Deacs has been a nightmare for Clawson to watch.

The Hokies need to move Hartman around a little, and make him uncomfortable all day long in the pocket. If the Hokies can do this, it should be another big day for the “Lunch Pail D”.

Fast starts offensively continue to be key Virginia Tech. If the Hokies can do that, this will force Hartman and Wake Forest to throw the ball, which is certainly not their strength. The Deacs will want to run the ball with Walker and take their shots when the opportunities come.

The Hokies certainly can not have a repeat of the North Carolina embarrassment, and will try to keep Hartman in obvious passing situations. Obvious passing downs will also allow Virginia Tech’s talented defensive front to pin its ears back and get after the passer.

This should be a fun one for Virginia Tech. The Demon Deacons match up perfectly with the Hokies. With their weak offensive line, and lack of run defense, Herbert and company should run all over the Demon Deacons. We’re looking to see 300 rushing yards for the Hokies this afternoon.

The run game will be too much for Wake Forest. While the Demon Deacons’ offense may keep it close early on, they’ll fall at home to the Hokies this afternoon.