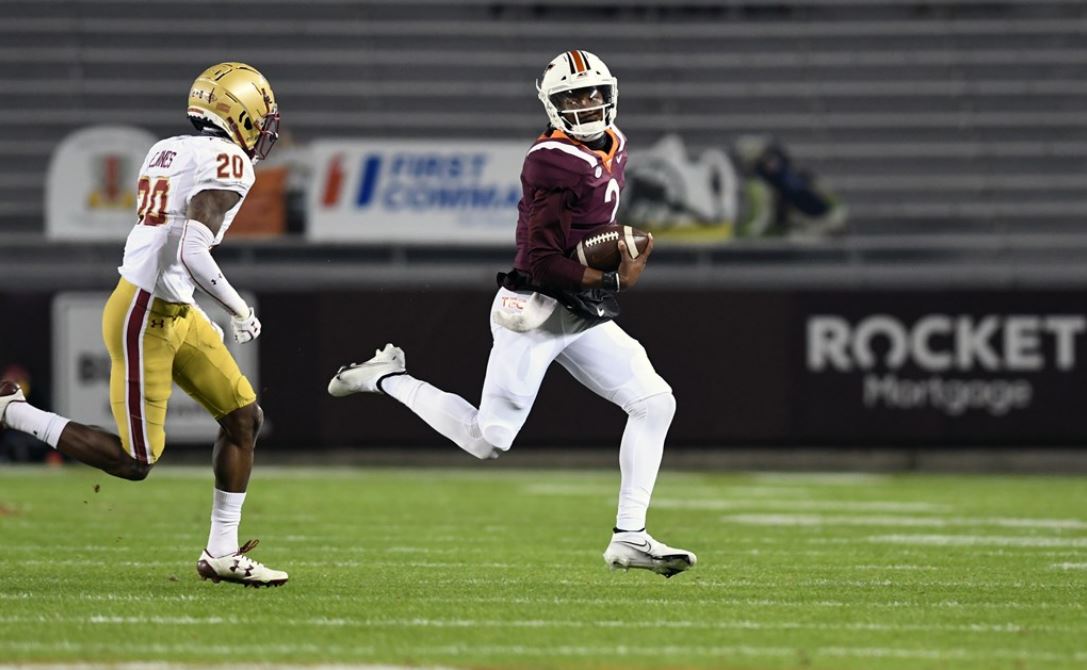 As for the 19th-ranked Virginia Tech Hokies, they prepare to travel to Winston-Salem to take on the Wake Forest Demon Deacons on Saturday afternoon. There is plenty to reflect on if you’re a Virginia Tech fan heading into this match-up against the Deacs.

Looking back at last week’s 40-14 throttling of the Boston College Eagles, there’s a lot to take away from the victory.

How can we catch you up real fast on a Friday work day? Give us 60 seconds. As we continue our series “Six Takeaways in 60 Seconds”, looking back on the Hokies’ win over Boston College.

Hendon Hooker is back and better than ever. After no sign of the Greensboro, NC native for the first two and a half games, head coach Justin Fuente finally gave Hooker the nod as the Hokies’ starting quarterback.

In his first full game back, Hooker put up just a casual 11-for-15 passing day with 111 yards and a touchdown. That’s not even the best part though. Hooker was actually Virginia Tech’s leading rusher, going for 164 yards on 18 carries and three touchdowns.

If Hooker can be this 2-dimensional the rest of the season, partnered with Khalil Herbert in the backfield, the Hokie offense will be nearly unstoppable.

Virginia Tech intercepted quarterback Phil Jurkovec twice in this one. Both Brion Murray and Devin Taylor got in on the fun, picking off Jurkovec once apiece.

Taylor, an Illinois State transfer, also forced a fumble for Virginia Tech. Both Alan Tisdale and Chamarri Conner forced a fumble as well. The Hokies were able to take control of the game due to BC’s lack of ball security.

Khalil Herbert is Khalil Herbert. We know that. The Heisman hopeful put up 143 yards on 18 carries and got in the end zone with a receiving touchdown.

But what made Virginia Tech fans sleep even better that night, was the contributions of Raheem Blackshear. The Rutgers transfer compliments Herbert well.

Blackshear got involved a lot in the second half, finally getting in the end zone for his first touchdown of the season. If both Herbert and Blackshear continue to run like they have, Virginia Tech’s run game will be virtually unstoppable in 2020.

With all of Virginia Tech’s COVID-19 troubles on the defensive side of the ball, multiple guys have had to step up in the absence of Divine Deablo, Brion Murray, Jermaine Waller, and others. Although Deablo and Murray were back last Saturday, that still didn’t stop a lot of defenders from making an impact for coordinator Justin Hamilton’s defense.

As mentioned above, Taylor recorded a forced fumble and an interception. Dorian Strong, who’s only other Division I offer was from Delaware State, continues to impress in the Hokies’ secondary.

One thing going forward Hokie fans will now have to forget about is Brian Johnson’s field goal streak. Johnson’s stretch of 17 straight made field goals came to an end. Johnson missed a 54-yarder wide right on Virginia Tech’s opening drive. He responded with makes of 41 and 27 yards.

Johnson has quickly become one of the best kickers in the country. After a shaky collegiate start, it’s certainly good to see him perform the way he has in 2020.

Many Virginia Tech fans have wondered why we haven’t seen much of Tre Turner this season. Turner left the Boston College game in the second quarter, but seems to be good to go after tweeting out relief to Tech fans after the game.

The star receiver has been dealing with a foot issue all season long, and it seemed it was too painful to keep playing on Saturday night. Turner will be suited up and ready to play against Wake Forest this weekend. He’ll aim to disprove the doubters about his health and ability.