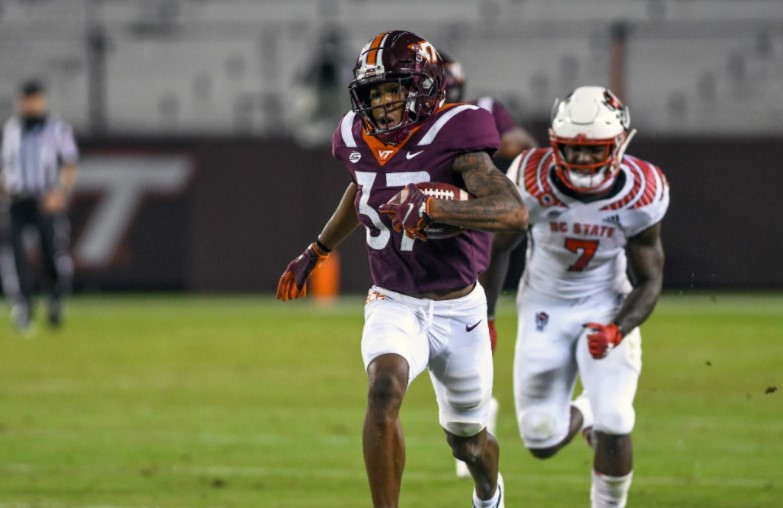 We are now approaching Virginia Tech’s second game of the season against the Duke Blue Devils. The Hokies are riding into Durham with a lot of momentum after a big 45-24 home win over NC State on Saturday at Lane Stadium.

The Hokies have a lot to reflect on heading into this week’s match-up against the Blue Devils. With that, we look at five key takeaways from Virginia Tech’s dominant win over NC State.

Justus Reed is a Stud

Youngstown State defensive end transfer Justus Reed is a grown man. At 24 years old, this is Reed’s seventh season as a part of college football. The Clearwater, Fla. native started his career in Gainesville as a Florida Gator before then transferring to Youngstown State. Reed, who was arguably a top-5 graduate transfer on the market, decided then to make his final collegiate stop in Blacksburg.

His debut for the Hokies could not have been more impressive. Reed impressed with five tackles, including two sacks, and applied a tremendous amount of pressure to Wolfpack quarterbacks Bailey Hockman and Devin Leary.

Don’t sell it short. Virginia Tech’s quarterback room is the deepest it’s been in quite some time. After starting quarterback Hendon Hooker missed last week’s game due to only recently returning from quarantine, Oregon transfer and redshirt junior Braxton Burmeister started in Hooker’s place. Burmeister carved up the Wolfpack defense the time he was in, but exited the game early on in the second quarter with a hand cramp.

Third-string quarterback? No problem. Quincy Patterson, cold off the bench, stepped in in a huge way during the Hokies’ win. Patterson is no stranger to big situations. He led the Hokies to their historic 6-overtime win over North Carolina last season, and nearly knocked off a top-15 Notre Dame team on the road. Patterson showed no stepping back Saturday.

The Chicago native combined for three touchdowns against the Wolfpack. Patterson found both Tayvion Robinson and James Mitchell for scores. He added a 1-yard run for the final touchdown of the night.

Head coach Justin Fuente says he expects Hooker to return this week against Duke, with Burmeister also expected to play. But if the Hokies ever find themselves in a similar situation, Virginia Tech should be very confident with who they have in that quarterback room.

Special Teams: One of the League’s Best

Special teams, or “Beamer Ball”, has always been a staple in Blacksburg on great Hokie football teams. This year is no exception. The Hokies’ special teams were outstanding on Saturday and are poised for a big year this season.

Let’s start with Ray Guy Award watch list nominee and punter Oscar Bradburn. Bradburn is the best punter the Hokies have had in quite some time. When Virginia Tech did have to punt Saturday, Bradburn pinned the Wolfpack deep in their own territory, making opportunities for points hard to come by for Dave Doeren’s team.

Brian Johnson has also been money for the Hokies. He converted all three field goal attempts against the Wolfpack, including ones from 46 and 49 yards out. Johnson will wear Frank Beamer’s honorary No. 25 jersey this Saturday against Duke.

The Hokies also have dynamic playmakers in the return game as well. Tayvion Robinson can make some noise as a punt returner, and Khalil Herbert can too as a kick returner.

The awareness for Robinson to bat an onside kick attempt by the Wolfpack out of bounds showed an extremely high football IQ. A lot of credit goes to special teams coordinator James Shibest, who recruited the Australian punter and has returned Virginia Tech’s special teams to one of the nation’s best.

Without 23 players, his starting quarterback and four coaches, including the defensive coordinator, Fuente shrugged his shoulders after the big win against the Wolfpack.

The other remarkable thing about this win for the Hokies, is the contribution of transfers on Saturday. Raheem Blackshear from Rutgers. Khalil Herbert from Kansas. Brock Hoffman from Coastal Carolina. Brion Murray from junior college. Braxton Burmeister from Oregon. Justus Reed from Youngstown State. And finally, Enzo Anthony from Virginia.

Virginia Tech absolutely cashed in on the transfer market this offseason, and those guys certainly carried the weight in the Hokies’ win. Needless to say, Fuente deserves a ton of credit for rallying his guys on Saturday, and it will be interesting to see how the group responds against Duke.

Our final takeaway from last Saturday’s game against NC State, turns our attention to Khalil Herbert, a graduate transfer from Kansas. Herbert was a force for the Hokies’ run game on Saturday.

Some are saying he’s the best the Hokies have had in the backfield since David Wilson. Herbert ran for 104 yards on six carries and had two receptions for 46 yards.

The dynamics of Herbert in the backfield will surely benefit the Hokies this season, as it did against the Wolfpack. Look for Herbert to be a big play-maker this Saturday as he’ll try to gash a depleted Duke defense.