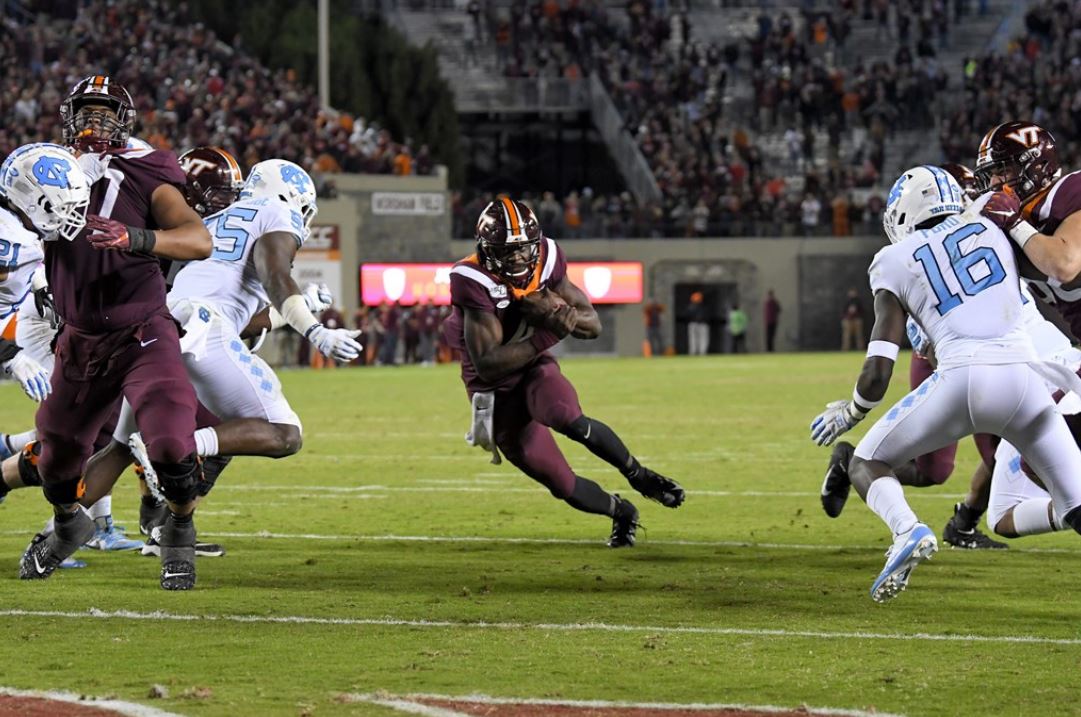 In what will be a 5-part series, we’ll be looking back on those memorable victories. The No. 1 win on our list was a contest that seemed like it would never end.

There were some fantastic games and absolute thrillers on this list, but this one easily trumps them all. The top spot on the list is a game that featured three Virginia Tech quarterbacks, six overtimes and a lot of fun. In the end on Oct. 19, 2019, Virginia Tech slipped past North Carolina, 43-41.

This absolute classic got going quickly. North Carolina quarterback Sam Howell connected with Dazz Newsome for a 47-yard touchdown less than a minute into the game. After Hokies’ quarterback Hendon Hooker fumbled on Tech’s opening drive, UNC went back down the field for a field goal. Less than five minutes in, the Tar Heels already found themselves up, 10-0.

The Hokies finally got on the board right at the end of the first quarter as Hooker found a wide open Tre Turner, who streaked his way into the end zone to cut the deficit down to 10-7. Another Newsome touchdown was quickly followed by a Virginia Tech touchdown run from Deshawn McClease.

With less than five minutes to play in the first half, the deficit was still three for the Hokies. That’s when disaster struck. As Hooker was trying to shake a defender, his foot got caught in the ground and his knee was twisted. His day was ultimately over.

The next man up was Ryan Willis, the former starter who lost his job earlier in the season. Resiliently, Willis found Damon Hazelton in the back of the end zone for a remarkable catch to put the Hokies up 21-17 at halftime.

After threatening and driving down the field on the opening drive of the second half, Willis took a horrendous sack on third down. That pushed the Hokies out of field goal range and swung momentum in favor of the Tar Heels, who would score on the next possession. After continuing to make poor decisions, Fuente decided to try something else at quarterback. He went to stud redshirt freshman Quincy Patterson.

Down 24-21 to start the final quarter, Patterson led the Hokies back down the field. The Hokies eventually tied the game on a Brian Johnson field goal. Mack Brown’s team then dialed up some razzle dazzle that involved a modified flea flicker and sent Antwon Green 68 yards into the end zone to put the Tar Heels back in front, 31-24, with five minutes left.

Less than a minute later, Patterson and company countered with a long quarterback draw. It ended with the 6-foot-4 quarterback in the end zone to tie the game up. Overtime at Lane Stadium is where we went.

Back and Forth We Go

By that time, night was upon us and the under-the-lights atmosphere at Lane Stadium really kicked into gear. After trading scores in the first two overtimes, both Johnson and Noah Ruggles missed field goals in the third overtime period.

In overtime No. 4, Jermaine Waller blocked Ruggle’s field goal attempt. With a chance to finally end the contest, Johnson countered with yet another miss and we were heading to a fifth overtime. 2019 marked the first year that after four overtimes, the teams alternated 2-point conversion tries.

Khalil Ladler made two huge stops for the Hokies in both the fifth and sixth overtimes, blowing up an option play and getting to Howell as he scrambled. Then, the play came they’ll talk about in Blacksburg for a very long time. Patterson fought his way through a line of defenders and muscled his way in to give the Hokies a 43-41 win over the Tar Heels.

Lane Stadium was as crazy as it had been in years after a win, as the Virginia Tech cannon “Skipper” fired over and over, signaling Hokies victory. Fuente threw his hands up in relief, and the team mobbed Patterson, the hero of that night’s contest.

This game definitely cemented Patterson’s legacy in Blacksburg, even if he wasn’t the full-time starter. The Hokies improved to 5-2 after the victory and were set up again to make another run at the ACC Coastal.

Through six overtimes, three quarterbacks, a fantastic environment, back-and-forth game, so many emotions, and a whole lot of adversity, this was truly a magnificent win for the Virginia Tech Hokies. That is exactly why this stands as the best home win of the Fuente era.